Supermarket cards and retail surveillance devices are merely the opening volley of the marketers’ war against consumers. If consumers fail to oppose these practices now, our long-term prospects may look like something from a dystopian science fiction novel.

A new consumer goods tracking system called Radio Frequency Identification (RFID) is poised to enter all of our lives, with profound implications for consumer privacy. RFID couples radio frequency (RF) identification technology with highly miniaturized computers that enable products to be identified and tracked at any point along the supply chain.

The system could be applied to almost any physical item, from ballpoint pens to toothpaste, which would carry their own unique information in the form of an embedded chip. The chip sends out an identification signal allowing it to communicate with reader devices and other products embedded with similar chips.

Analysts envision a time when the system will be used to identify and track every item produced on the planet.

A number for every item on the planet

RFID employs a numbering scheme called EPC (for "electronic product code") which can provide a unique ID for any physical object in the world. The EPC is intended to replace the UPC bar code used on products today.

Unlike the bar code, however, the EPC goes beyond identifying product categories — it actually assigns a unique number to every single item that rolls off a manufacturing line. For example, each pack of cigarettes, individual can of soda, light bulb or package of razor blades produced would be uniquely identifiable through its own EPC number.

Once assigned, this number is transmitted by a radio frequency ID tag (RFID) in or on the product. These tiny tags, predicted by some to cost less than 1 cent each by 2004 [Note: the one cent tag has proved unattainable as of late 2004. The cost of a passive RFID tag is currently between $0.20 and $0.80. – K.A. 9/04] are "somewhere between the size of a grain of sand and a speck of dust." They are to be built directly into food, clothes, drugs, or auto-parts during the manufacturing process.

Receiver or reader devices are used to pick up the signal transmitted by the RFID tag. Proponents envision a pervasive global network of millions of receivers along the entire supply chain — in airports, seaports, highways, distribution centers, warehouses, retail stores, and in the home. This would allow for seamless, continuous identification and tracking of physical items as they move from one place to another, enabling companies to determine the whereabouts of all their products at all times.

Steven Van Fleet, an executive at International Paper, looks forward to the prospect. "We’ll put a radio frequency ID tag on everything that moves in the North American supply chain," he enthused recently.

The ultimate goal is for RFID to create a "physically linked world" in which every item on the planet is numbered, identified, catalogued, and tracked. And the technology exists to make this a reality. Described as "a political rather than a technological problem," creating a global system "would... involve negotiation between, and consensus among, different countries." Supporters are aiming for worldwide acceptance of the technologies needed to build the infrastructure within the next few years.

The implications of RFID 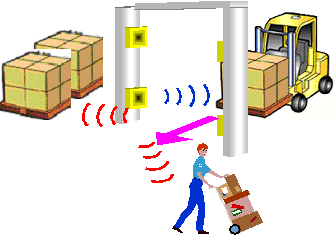 "Theft will be drastically reduced because items will report when they are stolen, their smart tags also serving as a homing device toward their exact location." — MIT’s Auto-ID Center

Since the Auto-ID Center’s founding at the Massachusetts Institute of Technology (MIT) in 1999, it has moved forward at remarkable speed. The center has attracted funding from some of the largest consumer goods manufacturers in the world, and even counts the Department of Defense among its sponsors. In a mid-2001 pilot test with Gillette, Philip Morris, Procter & Gamble, and Wal-Mart, the center wired the entire city of Tulsa, Oklahoma with radio-frequency equipment to verify its ability to track RFID equipped packages.

Though many RFID proponents appear focused on inventory and supply chain efficiency, others are developing financial and consumer applications that, if adopted, will have chilling effects on consumers’ ability to escape the oppressive surveillance of manufacturers, retailers, and marketers. Of course, government and law enforcement will be quick to use the technology to keep tabs on citizens, as well.

The European Central Bank is quietly working to embed RFID tags in the fibers of Euro banknotes by 2005. The tag would allow money to carry its own history by recording information about where it has been, thus giving governments and law enforcement agencies a means to literally "follow the money" in every transaction. If and when RFID devices are embedded in banknotes, the anonymity that cash affords in consumer transactions will be eliminated.

Hitachi Europe wants to supply the tags. The company has developed a smart tag chip that — at just 0.3 mm square and as thin as a human hair — can easily fit inside of a banknote. Mass-production of the new chip will start within a year.

"Radio frequency is another technology that supermarkets are already using in a number of places throughout the store. We now envision a day where consumers will walk into a store, select products whose packages are embedded with small radio frequency UPC codes, and exit the store without ever going through a checkout line or signing their name on a dotted line." Jacki Snyder, Manager of Electronic Payments for Supervalu (Supermarkets), Inc., and Chair, Food Marketing Institute Electronic Payments Committee

RFID would expand marketers’ ability to monitor individuals’ behavior to undreamt of extremes. With corporate sponsors like Wal-Mart, Target, the Food Marketing Institute, Home Depot, and British supermarket chain Tesco, as well as some of the world’s largest consumer goods manufacturers including Procter and Gamble, Phillip Morris, and Coca Cola it may not be long before RFID-based surveillance tags begin appearing in every store-bought item in a consumer’s home.

According to a video tour of the "Home of the Future" and "Store of the Future" sponsored by Procter and Gamble, applications could include shopping carts that automatically bill consumers’ accounts (cards would no longer be needed to link purchases to individuals), refrigerators that report their contents to the supermarket for re-ordering, and interactive televisions that select commercials based on the contents of a home’s refrigerator.

Now that shopper cards have whetted their appetite for data, marketers are no longer content to know who buys what, when, where, and how. As incredible as it may seem, they are now planning ways to monitor consumers’ use of products within their very homes. RFID tags coupled with indoor receivers installed in shelves, floors, and doorways, could provide a degree of omniscience about consumer behavior that staggers the imagination.

"After bar codes, the next ‘big thing’ was frequent shopper cards. While these did a better job of linking consumers and their purchases, loyalty cards were severely limited... consider the usage, consumer demographic, psychographic and economic blind spots of tracking data.... Something more integrated and holistic was needed to provide a ubiquitous understanding of on- and off-line consumer purchase behavior, attitudes and product usage. The answer: RFID (radio frequency identification) technology... In an industry first, RFID enables the linking of all this product information with a specific consumer identified by key demographic and psychographic markers... Where once we collected purchase information, now we can correlate multiple points of consumer product purchase with consumption specifics such as the how, when and who of product use."

Marketers aren’t the only ones who want to watch what you do in your home. Enter again the health surveillance connection. Some have suggested that pill bottles in medicine cabinets be tagged with RFID devices to allow doctors to remotely monitor patient compliance with prescriptions.

While developers claim that RFID technology will create "order and balance" in a chaotic world, even the center’s executive director, Kevin Ashton, acknowledges there’s a "Brave New World" feel to the technology. He admits, for example, that people might balk at the thought of police using RFID to scan the contents of a car’s trunk without needing to open it. The Center’s co-director, Sanjay E. Sarma, has already begun planning strategies to counter the public backlash he expects the system will encounter.