God's most precious gift to His Church:
Jesus is really present in the consecrated Host

On Thursday, June 10, 2004, when celebrating Corpus Christi with the Diocese of Rome, Pope John Paul II announced that in October, 2004, coinciding with the International Eucharistic Congress of Guadalajara, Mexico, a special Year of the Eucharist will begin, which will end in October 2005 with the ordinary assembly of the Synod of Bishops, whose them will be “The Eucharist: Source and Summit of the Life and Mission of the Church.”

The Holy Father explained that this is in line with the pastoral project he presened in his apostolic letter for the New Millennium, in which he invited the faithful to “start afresh from Christ”: “Contemplating more assiduously the countenance of the Incarnate Word, really present in the Sacrament, they will be able to exercise themselves in the art of prayer, and commit themselves in that high degree of the Christian life which is the indispensable condition to develop in an effective manner the new evangelization.”

The Eucharist is a great mystery — Jesus is really present, body and blood, soul and divinity, in the consecrated Host — but it is also God's greatest gift to mankind, since in it, Christ becomes intimately united to us, by becoming the Bread of Life.

On April 17, 2003 — Holy Thursday — Pope John Paul II devoted a whole encyclical letter to the Eucharist, to remind the faithful about the importance of this sacrament, and the right dispositions to receive it. To prepare this special year of graces, which begins in October, 2004, here are large excerpts from this latest encyclical of the Sovereign Pontiff:

TO THE BISHOPS' PRIESTS AND DEACONS, MEN AND WOMEN
IN THE CONSECRATED LIFE, AND ALL THE LAY FAITHFUL
ON THE EUCHARIST IN ITS RELATIONSHIP TO THE CHURCH 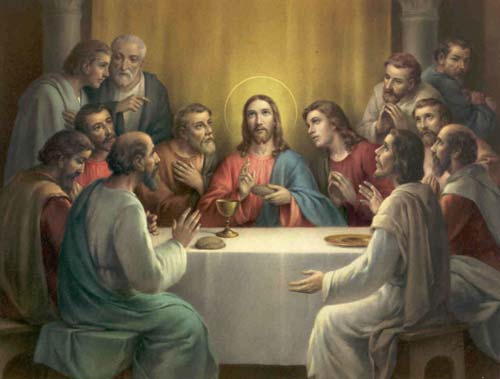 “This is My body which will be given up for you.”

The mystery of Faith

The Eucharist builds the Church

The dignity of the Eucharistic Celebration

The Apostolicity of the Eucharist and of the Church

The Eucharist and Ecclesial Communion

At the school of Mary, “woman of the Eucharist”