On June 15-22, 2008, Quebec City held the 49th International Eucharistic Congress. This week was filled catecheses, testimonies, liturgies, adoration, a procession, workshops, etc., that gave those who attended it a wonderful picture of the richness of the teachings and rites of the Roman Catholic Church. It showed us how fortunate we are to have so many gifted cardinals, bishops, priests and lay people committed to the salvation of souls.

During the week, every catechesis, testimony and homily explained a different aspect of the Eucharist, underlining that true love of God and Eucharistic adoration must necessarily result in love of neighbour and social commitment. For the occasion, Quebec City’s Pepsi Coliseum (an ice hockey arena) became a huge church, where the Holy Mass was celebrated each day before 12,000 people. The Congress began on Sunday, June 15, with the opening Mass concelebrated by 40 cardinals and 106 bishops, the main celebrant being Jozef Cardinal Tomko, the papal representative and president emeritus of the Pontifical Committee for Eucharistic Congresses. 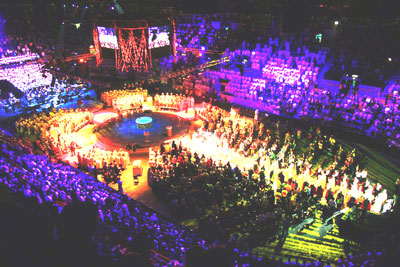 The "cleansing" of Quebec

This week-long Congress ended with the outdoor Mass on historic Plains of Abraham, as over 60,000 faithful gathered in pouring rain and thunder for the celebration of the Eucharist, also led by Cardinal Tomko, accompanied this time by more than 30 Cardinals, 200 bishops and over 1000 priests. Pope Benedict XVI delivered the homily on large video screens live via satellite from the Vatican. 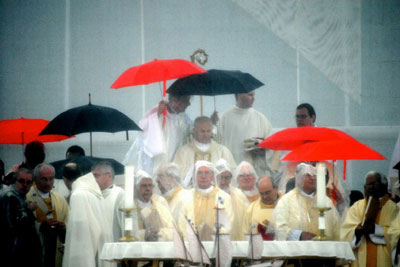 Sunday, June 22: rain pours on the altar, while the cardinals are concelebrating Mass.

As reported by Jenna Murphy of LifeSiteNews.com, "by the time the lengthy procession had ended and the Mass had begun, the skies had completely clouded over. At the very moment in the Mass when Catholics believe the bread and wine are ‘transubstantiated’ into the body and blood of Christ, the skies opened up and torrential rains drenched the crowd. During the Eucharistic prayer, a clap of thunder evoked from the massive congregation an awareness of the supernatural as all stood (and some knelt) open-mouthed in the deluge.

"After communion, Cardinal Tomko made his first unscripted comment of the Congress when he qualified the rain as ‘rain of grace’. This comment was seconded by Quebec’s Cardinal Marc Ouellet, who called it a ‘flood of Divine Goodness’ — a line that accompanied the front page spread in the Monday edition of Le Soleil, Quebec City’s local paper."

It was mentioned in the crowds that it was the cleansing of Quebec, which badly needed this spiritual boost. (In fact it rained daily during the whole week.) Basilian Father Thomas Rosica, the director of Salt and Light Catholic Media Foundation and Television Network (and former organizer of the 2002 World Youth Day in Toronto) explains, as reported by zenit.org (July 1, 2008) :

"The real problem in Quebec has been the spiritual void created by a religious and cultural rupture, a significant loss of memory, bringing in its wake a family crisis and an educational crisis, leaving citizens disoriented, unmotivated and destabilized.

"Several times during the magnificent week of the International Eucharistic Congress, Cardinal Ouellet stated emphatically that the congress marked a ‘turning point.’ At the lively Saturday evening prayer vigil with his devoted young people, the cardinal said the he felt as if he had been ‘raised from the dead’."

Other significant events mentioned by Father Rosica were the 5-kilometer (3-mile) procession of the Blessed Sacrament through the streets of Quebec City on Thursday evening, June 19, with 25,000 participants, and the ordination of twelve priests on Friday evening: "In a part of Canada and North America that has had few priestly vocations over the past decades, the ordination of 12 young men — eight of whom were from the new community "Famille Marie Jeunesse" — before a crowd of nearly 12,000 people elicited extraordinary emotion, joy, eruptions of applause, gratitude and abundant tears from those in attendance." 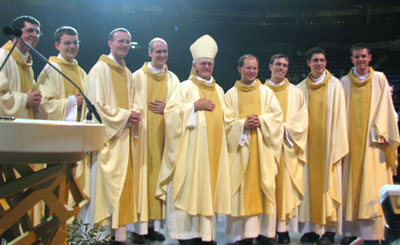 The eight new priests with their Bishop

The Eucharist, gift of God

Let us seek to know the causes of the food crisis

The life of Christ in our lives

The Eucharist and the mission of the Church

Being witnesses to the Eucharist

Receive the Eucharist with a pure heart

The Eucharist, a mystery to be lived