All farmers under ten acres must disappear

As in every other country, the Financiers have decreed the death of small farms in Poland, for they are the “pet hate” of globalism. The Polish farmers did not let the Communists seize their land in the 1950. Now they won't let the Financiers do the same thing. The following information is taken from the Jan. 10, 2002 issue of the U.S. Catholic weekly “The Wanderer”:

WARSAW – As Poland moves toward “full membership” in the European Union, its strong peasantry may be headed for the dustbin of history. A casualty of Brussels' bureaucratic efficiency, reported the Christian Science Monitor January 2.

Reporting from Stryszow, Poland, Aric Farnam revealed that European Union agricultural policies call for the liquidation of all farms under ten acres – a death sentence that will affect 1.6 million of the country's two million farms.

“Smallholders are running up against the big-is-beautiful agricultural policies of the European Union, which Poland hopes to join by 2004,” wrote Farnam.

For years, Poland's farmers have suffered under EU agriculture policies, leading to strikes, road blockades and demonstrations, and anti-European Union sentiment resulted in a surprisingly strong showing at the polls last September, when an unexpected 10.2% of the vote was given to anti-EU parties.

One of the major fear factors leading to surprisingly strong showings by the League of Polish Families, a hard-line Catholic party, was suspicion that large chunks of Western Poland – the heart of Poland's peasantry – would fall into the hands of wealthy foreigners, looking for cheap land and well-maintained farms and estates.

Farnam reported that Brussels' bureaucrats claim the small Polish farms are “inefficient, unsanitary, and perpetuate poverty. EU agricultural policy requires that Poland modernize and restructure its farming sector over the next eight months. That means instituting regulations that would keep small farmers from selling their produce, and push more than a million farmers off their land.

“But most Polish farmers are saying no, fearful that they will end up as an even poorer class of urban unemployed.”

Farnam quoted one smallholder as saying: “The Communists tried to force us off of our land in the 1950s, and they failed. We are staying. This is the only life we know, and it suits us fine. Who are those politicians to say our farm is too poor.

“The average farmer here in Southern Poland owns just 10 acres, but most have snug homes, a car, amd even a few other luxuries,” Farnam wrote, even though their produce sells for next to nothing: Wheat is five cents a pound, and five gallons of milk goes for $4.00.

“In its annual report on candidate states issued last month, the EU ranked the great number of small inefficient farms in Poland among the country's most serious barriers to accession. Agriculture accounts for 25% of employment in Poland, as opposed  to 4% in the EU. 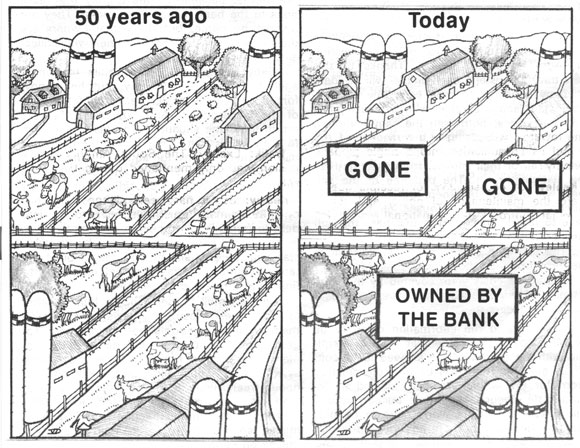 “The European Commission,” Farnam continued, “maintains that Polish farmers will not be eligible for the same EU subsidies as old members, yet must still comply with standards designed for larger and more modern farms, leaving many Poles wondering if joining the EU is worth the trouble. Since 1996, preliminary restructuring and the implementation of EU standards have contributed to a drop in farm incomes of more than 30% in Poland, a problem compounded by a massive influx of subsidized, factory-farm products from Western Europe to Polish markets...

“According to Rose, the same policies devastated his country, putting 1.2 million British farmers out of business and cutting remaining farm incomes by 70%. The results, he says, were pollution, loss of biodiversity, stock epidemics, unhealthy food, and shattered communities.

“`I am in Poland to urge you to fight for the future of your beautiful, diverse, small-scale farms', he said. `Say no to the intensive farming ethic that has destroyed my country'.” (End of The Wanderer's article.)

Unfortunately, this campaign to reduce the number of farms is global, and Canada is no exception. An article of the Canadian Press released on Feb. 23, 2002, reported that “the Canadian farming industry has been hit with the largest decline in employment in almost 35 years, according to a Statistics Canada report released Feb. 22. Numbers, complied from 1998 to 2001, showed a decrease of 26% in Canadian farming employment, leaving only 313,000 in the industry at the end of 2001.

“The report also states the number of farmers approaching retirement is also high, with 15% expected to retire within the next five years. Farming profits have remained almost stagnant since 1996 and have steadily declined over the past 25 years. In 1975, net profits for farming across the country stood at $2.6-billion, significantly more attractive than last year's rate of $1.1-billion.”

The Polish farmers, who have seen the example of farmers ruined in other nations, are absolutely right to defend their small farms. Pope John XXIII wrote in his encyclical letter Mater et Magistra (n. 115): “It is necessary to modify economic and social life so that the way is made easier for widespread private possession of such things as durable goods, homes, gardens, tools requisite for artisan enterprises and family-type farms.”

Let us call for the implementation of the Social Credit principles, to free farmers and everybody from the snatches of the International Financiers!