on Wednesday, 01 January 2003. Posted in Microchips

The world Financiers are so power hungry that money for them is not enough: they want to control everything and everybody. They will use the latest technology to control your every thought and action through a microchip implanted under your skin. This chip will first come in the form of mandatory ID cards for everyone, in the guise of security, to fight terrorism. Then, under the pretext that your identity can be stolen, the chips will be embedded under your skin. What they will not tell you is that these same chips can be altered to be mind-control devices as well. Seems far-fetched? Just look at the recent developments:

In the September, 2002, issue of Popular Science Magazine, a new I.D. card was revealed that is to be imposed upon all U.S. citizens. The card has the letters USID in the upper left with the words “United States Identification” under them. Then, the words Department of Homeland Security appear, under which is the social security number and, under that, the date of birth. Then, there is the name of the individual with basic statistics including city of residence. To the far right on the card is a laser-engraved photo with a RFID or radio frequency identification device in the forehead of the individual.

The background on the card is the truncated pyramid with the all-seeing eye. There is also a memory strip containing 20 megabytes of data including information about your fingerprints, iris scans, face scans, heartbeat characteristics, and DNA sequences. (In claiming to protect you, you will be more vulnerable for identity theft, and even framing for crimes that you did not do. By placing your blood at a crime scene, evil people could implicate you in crimes that you did not commit.) More than 30 countries, from Italy to Malaysia, have already introduced “smart” ID cards.

Visitors to the U.S.A. from the fall 2004 must have microchip IDs (that include biometric data like retina and fingerprint scans) in their passports. The U.S.A. is pushing Canada to do the same. That is why one sees Canadian Immigration Minister Denis Coderre pushing for such a national ID card that would include thumb-prints and iris scans (As reported on February 7, 2003). Privacy Commissioner George Radwanski said such a card would be useless against determined terrorists, and it would create a “Big Brother” state.

Paying with your fingerprints

On May 16, 2002, the Houston Chronicle reported that at “Kroger stores, customers are getting their groceries without cash, check, or credit card. They rely on a new machine called SecureTouch-n-Pay. Shoppers can enroll free of charge to use the finger-image machine, officially known as a biometric electronic financial transaction processing system. About 10 to 15 people per store sign up each week and enroll in the fingerprint identity verification system. Their fingerprint is scanned, and the purchases are automatically charged to their account.”

On May 10, 2002, Jeff and Leslie Jacobs, along with their 14-year-old son, Derek, received national coverage from the U.S. news media, when they had tiny chips implanted in their arms. Each grain-of-rice sized chip, (called VeriChip, and manufactured by the Florida-based company Applied Digital Solutions), took only about a minute to insert under local anesthesia.

In October, 2002, Applied Digital Solutions launched a national campaign to promote the device (VeriChip), offering $50 discounts to the first 100,000 people who register to get embedded with the microchip. The rice-size device costs $200. Those implanted must also pay for the doctor's injection fee and a monthly $10 database maintenance charge.

ADS also promotes a subdermal chip, called Guardian Angel, which sends and receives data and which can be continuously tracked by GPS (Global Positioning Satellite) technology. The transceiver's power supply and actuation system are unlike anything ever created. When implanted within a body, the device is powered electromechanically through the movement of muscles, and it can be activated either by the 'wearer' or by the monitoring facility."

Every product will get chipped

There is a new tracking technology that is currently being developed at Massachusetts Institute of Technology. Their stated goal is to tag every item in the world! Everything you buy from shoes to shirts will be embedded with its own tiny electronic tag that can be read as you exit the store, automatically billing your account without the benefit of cash. Computers will read your GPS-enabled chip for your ID and match the e-PC code to bill your account.

The generic name for this technology is RFID, which stands for radio frequency identification. RFID tags are miniscule microchips, which already have shrunk to half the size of a grain of sand. They listen for a radio query and respond by transmitting their unique ID code. Most RFID tags have no batteries: they use the power from the initial radio signal to transmit their response.

Retailers adore the concept. Wal-Mart and the U.K.-based grocery chain Tesco are starting to install "smart shelves" with networked RFID readers. In what will become the largest test of the technology, consumer goods giant Gillette recently said it would purchase 500 million RFID tags from Alien Technology of Morgan Hill, Calif. The company won't reveal how much  it charges for each tag, but industry estimates hover around 25 cents. The company does predict that in quantities of 1 billion, RFID tags will approach 10 cents each, and in lots of 10 billion, 5 cents a tag. 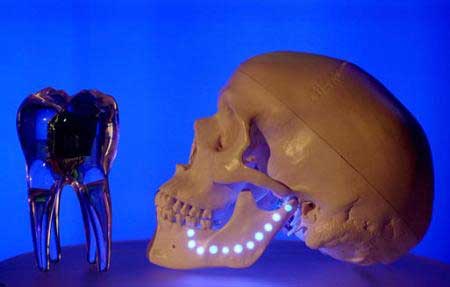 Tired of losing your cell phone? Having other people listen in on your conversations? Two British inventors on June 28, 2002, unveiled a prototype of a device that could solve all those problems with mobile phones. There's only one drawback — your dentist would have to install this thing inside one of your molars.

Unofficially known as the "telephone tooth," the device would allow you to receive phone calls, listen to music, without anyone nearby hearing a thing.

The "telephone tooth" is a small device placed in in a person's back molar that includes a wireless, low-frequency receiver and a gadget that turns audio signals into mechanical vibrations, which would pass from the tooth directly to the inner ear as clear sounds.

The user also would keep a tiny object outside his body to turn the cell phone on and off, and to program it.

On May 13, 2002, the newspapers reported that by implanting electrodes the width of a hair in rats' brains, U.S. scientists have created remote-controlled rodents that could be commanded to turn, climb, jump or navigate piles of rubble, an advance they say could someday assist in search and rescue efforts. Movement signals are transmitted from a computer to the rat's brain via a radio receiver strapped to its back.