Limiting the world population to 500 million?

The ten commandments of the New World Order Engraved on the strangest monument in AmericaOn one of the highest hilltops in Elbert County, Georgia, stands a huge granite monument. Five massive slabs of polished granite rise out of the earth in a star patte

On one of the highest hilltops in Elbert County, Georgia, stands a huge granite monument. Five massive slabs of polished granite rise out of the earth in a star pattern. The rocks are each 16 feet tall, with four of them weighing more than 20 tons apiece. Together they support a 25,000-pound capstone. Four ancient languages are engraved on the capstone, including Babylonian Cuneiform, Sanskrit, Egyptian Hieroglyphics, and Classical Greek. Engraved in eight different languages on the four giant stones that support the common capstone are ten guides, or commandments. That monument is alternately referred to as The Georgia Guidestones or the American Stonehenge. Though relatively unknown to most people, it is an important link to the Occult Hierarchy that dominates the world in which we live.

The origin of that strange monument, unveiled in March 1980, is shrouded in mystery because no one knows the true identity of the man or men who commissioned its construction. All that is known for certain is that in June 1979, a well-dressed, articulate stranger visited the office of the Elberton Granite Finishing Company and announced that he wanted to build an edifice to transmit a message to mankind. He identified himself as R. C. Christian but it soon became apparent that was not his real name. He said that he represented a group of men who wanted to offer direction to humanity.

There is also a highly intricate astrological significance to the Georgia Guidestones, which make it that much more ominous. There are precise notches that parallel the movement of the sun, from its solstices to its equinoxes, while its outer core marks the lunar-year cycle. There is even a stargazing hole, which locates the North Star, Polaris. And lastly, during the noon hour, the sun is positioned right at the center of the capstone, a highly symbolic occult design to say the least.

A message consisting of a set of ten guidelines or principles is engraved on the Georgia Guidestones in eight different languages, one language on each face of the four large upright stones. Moving clockwise around the structure from due north, these languages are: English, Spanish, Swahili, Hindi, Hebrew, Arabic, Chinese, and Russian. They read as follows:

4. Rule passion – faith – tradition – and all things with tempered reason.

5. Protect people and nations with fair laws and just courts.

10. Be not a cancer on the earth – Leave room for nature.

Not surprisingly a tablet not too far from the monument reads, “Let these be guidestones to an Age of Reason”. The Age of Reason was a book written by Thomas Paine, a prominent 18th century Freemason. Its intent was to destroy the Judeo-Christian beliefs upon which the American Republic was founded. 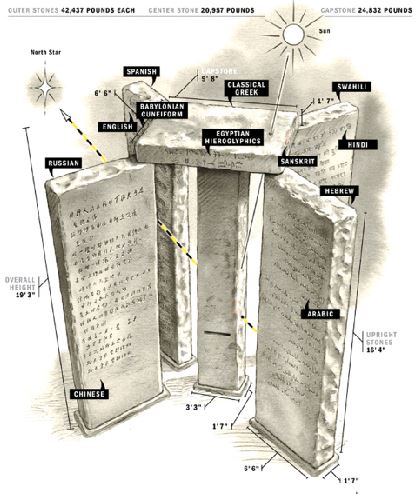 As you can see, these “commandments” entail sinister prospects for the future of humanity. This monument confirms the fact that there was a covert group intent on: (1) Dramatically reducing the population of the world, (2) Promoting environmentalism, (3) Establishing a world government, (4) Promoting a new spirituality.

Look at how ominous the very first commandment is: Limiting the population of the earth to 500 million will require the extermination of nine-tenths of the world’s people!

Certainly the group that commissioned the Georgia Guidestones is one of many similar groups working together toward a New World Order, a new world economic system and a new world spirituality. Behind those groups, however, are dark spiritual forces. Without understanding the nature of those dark forces it is impossible to understand the unfolding of world events.

It is obvious that these are ten the commandments of the New Word Order. Since Satan is using the promoters of a world government to herald the emergence of a universal False Messiah, one can conclude that the Georgia Guidestones may well contain the ten commandments of the Anti-Christ.