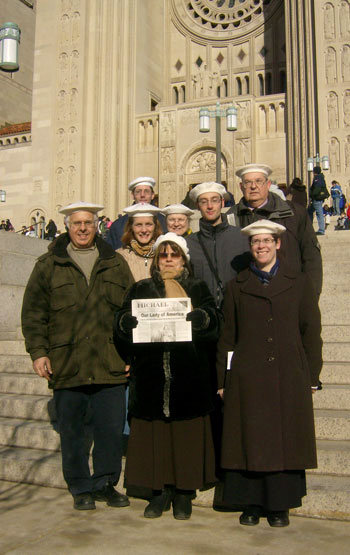 January 22, 2009 marked the 36th anniversary of the Supreme Court’s decision on Roe vs. Wade. EWTN reported as many as 400,000 people (about 300,000 youth) took part in the March for Life in Washington, DC. With a van filled with 55,000 leaflets on the beautiful message of Our Lady of America, we left Massachusetts on the morning of January 21st and headed to Washington.

We went directly to the Basilica of the Immaculate Conception, which is the National Shrine for the United States and assisted at the Vigil Mass, which was presided over by Cardinal Rigali from Philadelphia. Afterwards we offered our leaflets to those leaving the Basilica. The following morning we returned to assist at Mass and once again offered our leaflets to those pilgrims who had traveled from all over the United States, Canada and even parts of Europe to take part in the Pro Life March.

From there we headed over to the National Mall in downtown Washington, which is the main gathering area for the speakers and marchers. Hundreds of thousands of marchers began arriving; young people, seminarians, nuns, priests, brothers and even many of the older generation congregated to the spot and we were kept very busy all day trying to supply as many people as we could reach with our leaflets.

During this time, people were setting up their banners, and organizing themselves to begin marching towards the Supreme Court building on Constitution Avenue. After the crowd had continued onwards, we proceeded towards the Union Station, where all the buses were waiting to take the pilgrims back to their respective homes. There we offered bundles of our leaflets to the persons in charge of the buses, and many priests took some for their various parishes. We passed almost all of our leaflets, with the great help of Our Lady of America, who opened hearts to us through Her beautiful message.

We would like to thank all of those who helped us in this distribution. There were about 35 volunteers not including the many people who took large stacks and enthusiastically passed them among the crowd themselves. In our immediate group we had Adrienne O’Donnell, Lynn Mason, Marie Anne Jacques, Pascal Richard, Melvin Sickler & Francois Cright who had come all the way from Ontario and Quebec, Canada. Yves & Anne-Marie Jacques and six of their children came from Massachusetts and many friends from their parish of Our Lady of Czestochowa also helped in the distribution. Tom and Colleen Polyanski were with us from Maryland and The Franciscan Friars of the Immaculate from Connecticut. Dominic Roberto from Pennsylvania took 20,000 leaflets to spread in his area. We thank you for your precious collaboration during this successful leaflet distribution.

This message of Our Lady of America is directed particularly to the youth of America "who are willing wholeheartedly to follow Our Lady in her great battle against evil" and who will "bear the special title of "Torchbearers of the Queen." You are truly fulfilling this desire of "the Queen." This beautiful new leaflet can be ordered from us in any quantity, please feel free to call us at 1-888-858-2163.