British biologist Robert G. Edwards (photo at right), whose contribution to the technology of in-vitro fertilization has left 80 million embryos dead (and made 4 million couples parents), has been awarded the 2010 Nobel Prize in physiology or medicine.

Not long before this, Henry Morgentaler was awarded the Order of Canada, one of the highest honors that any Canadian can receive. This nomination prompted several Catholic honorees to return their title in protest. One begins to wonder what the criteria for these honorary nominations are, especially when murderers such as these men are receiving them!

Archbishop Ignacio Carrasco de Paula, head of the Pontifical Academy for Life, which speaks for the Vatican on medical ethics issues, told a news agency; “Without Edwards, there would not be a market on which millions of ovocytes are sold... and there would not be a large number of freezers filled with embryos in the world. In the best of cases they are transferred into a uterus, but most probably they will end up abandoned or dead, which is a problem for which the new Nobel Prize winner is responsible.” (These embryonic cells are also used in many medications, cosmetics, etc.)

Henry Morgentaler (photo at right) opened his first abortion clinic in 1969 and performed thousands of procedures, which were illegal at the time. Despite this, he continued to practice his trade of murder without legally paying for his crimes, killing thousands of innocent babies... all the while advocating the usual drivel about women’s “choice.”

Infertility is defined by present day healthcare as when a couple is unable to conceive for a one-year period of time. Once this couple has been declared “infertile”, in-vitro fertilization is promoted to “assist” them in achieving a pregnancy. In-vitro (literally, “in glass”) fertilization (IVF) is the beginning of a new human being outside the mother’s body.

The first step of an IVF procedure is to obtain a healthy egg from the woman who is seeking to become pregnant. A doctor does this during a laparoscopy, under general anesthesia. He inserts a laparoscope (a camera with a miniature flashlight on its head) into an incision near the woman’s navel. He locates a ripe egg that is about to be released from the follicle and extracts it with an aspirating tube. Doctors using more advanced techniques use ultrasound and make a “band-aid” incision under local anesthesia.

A technician places the retrieved egg in a Petri dish filled with a nutrient solution and exposes it for half a day to a few drops of sperm. If the egg is fertilized, he monitors it for proper growth. At the third or fourth day, (approximately the 8 or 16-cell stage), the doctor inserts the embryo into the woman’s uterus with a catheter or tube which he passes through the cervix.1

On July 25, 1978, Louise Brown, the first baby conceived in a Petri dish, was born. Since then, tens of thousands of such babies have been born, about one-third of them in the United States. Doctors Robert Edwards and Patrick Steptoe, who produced Louise Brown, discarded 99.5 percent of the ova fertilized in their lab over a period of 12 years. This means they had failed in their first 200 attempts at transferring the embryo to the uterus.2

He required the parents to agree to abort Louise if there was the slightest hint of an abnormality in her, so that the reputation of his new “science” would be protected. This eugenics attitude has been passed down to latter-day IVF clinics.

The first child conceived through IVF, then frozen, thawed, implanted and born is Zoe Leyland of Melbourne, Australia, who was born on March 28, 1984. Her mother was “superovulated” and produced 11 eggs which were then fertilized. Ten of these were deliberately destroyed through selective abortion or died naturally.5

The Centers for Disease Control (CDCs) released their first annual consumer report, which examined the success rates of 281 fertility clinics, in December 1997 and December 2001. In 1995, nearly 60,000 assisted reproduction procedures produced 11,315 live births, for a success rate of about 19 percent. By 1999, this success rate had risen to just over 25 percent (25.2%), with 16,588 live births resulting.

One of the many ugly ethical problems that fertility drugs and IVF have created is an alleged “need” for “pregnancy reduction” abortions. Doctors tell a woman that she is carrying too many preborn babies and an abortionist selectively kills one or more of them. 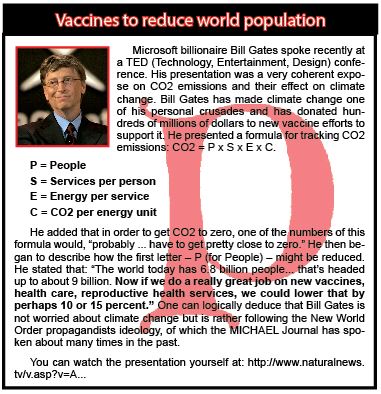 Mark Evans, a specialist in maternal and fetal medicine at Hutzel Hospital in Detroit, invented the “pregnancy reduction” abortion. He says he does 100 of the procedures a year, and believes that about 800 to 1000 are done annually in the United States. Mothers of quadruplets opt for “pregnancy reduction” 90% of the time, and 70% of the mothers of preborn triplets “reduce” their pregnancies.7

Two doctors described the “pregnancy reduction” procedure in the New England Journal of Medicine; Using ultra-sound to locate each fetus, the doctors would insert a needle into the chest cavity of the most accessible fetus and place the needle tip directly into the heart of the baby. Potassium chloride was then injected into the heart and the heart was viewed on the ultrasound screen until it stopped beating. Even at 9 weeks, 3 of the 12 fetuses selected for elimination presented problems. The heart continued to beat and the procedure had to be repeated.8

The U.S. Congress’ Committee on Small Business found that many unregulated IVF enterprises deliberately implant too many embryos just to increase their chances of success, after which they kill them.

IVF success rates are so discouraging that there are some centers trying to do better in terms of creating babies by using multiple [embryo] implants. It shows at the forty-one [leading] centers there were an average of three embryos used. Some centers use more than that. When they do, they sometimes create multiple pregnancies, three, four, five or six babies. Then they use fetal reduction, which means killing some fetuses to preserve the health of the mother and to help the other fetuses survive. That is a serious procedure.9

As with all immoral acts, “doctors” and “mothers” need newspeak to insulate themselves from the reality of what they are doing. The term “pregnancy reduction” is an example. Dr. Seymour Romney suggests we call the “roulette killing” of some of the babies in a multiple pregnancy “enhanced survival of multifetal pregnancies,” or ESMP for short.10