To request social credit from Mary

Written by Louis Even on Saturday, 01 August 2015. Posted in Social Credit 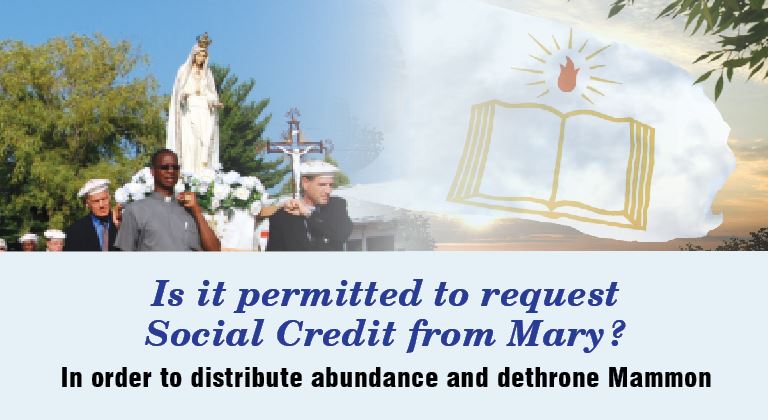 Somebody wrote to us:

“I am subscribed to your paper. I find it beautiful and interesting. But in your last issue, a picture shows a sign that reads, ‘0 Mary, Queen of the World, give us Social Credit.’ I wonder if it is permitted to request Social Credit from Mary.”

A doctrine, not a party

Perhaps this new subscriber thinks that this prayer means: Get the Social Credit party to come to power! If it was so, our correspondent could well be shocked. But that is not the case at all. MICHAEL is spread by the White Berets, who do not take charge of any electoral campaign, do not belong to and are not connected with any political party, no more with the party that dared to call itself “Social Credit” than the others.

Social Credit is a doctrine, a philosophy, and not a party. Those in the past who used the words “Social Credit” to designate a political party in a vulgar race for power prostituted a noble concept.

To all, the necessities of life

Social Credit is an economic and social doctrine that presents a new conception of the distribution of earthly goods. Among other things, a Social Credit economy would guarantee all and each a part of the production of their country. To all, not only to those who earn a salary. To all, children, sick, old people, women and girls at home, to those who cannot be employed and to those who are as well. To all and each, a part at least sufficient to cover the basic necessities of life. Without any condition other than the existence of a sufficient amount of goods to answer these needs.

In Canada, as well as in all other industrialized countries, the productive capacity is more than sufficient to supply all the necessities of life. In the face of such great possibility, it is inexcusable to leave even one single human being destitute and deprived of the essentials.

To request Social Credit from Mary is to ask, through her interfcession, this distribution of abundance, instead of its impoundment or destruction in front of unsatisfied human needs. It is to address to Mary a demand similar to what Jesus has taught us to address to our Heavenly Father: “Give us this day our daily bread.”

“Give us.” “Us” means everybody, not only those who earn money. All men, for we are all brothers, all children of God, and God has not created earthly goods only for certain categories of men, but for all.

In the middle of a world of abundant production, it required the Popes to recall this truth that all men are entitled to a share of the earthly goods. Pius XII, among other Popes, in his radio-address of June 1st, 1941, states:

“Every man, as a reason-gifted being, has by the fact of his nature the fundamental right to use the goods of earth.”

Such a right has neither to be granted nor refused by the government, nor by any public or private institution. It is a right that each one has by the very fact he is a human being. An individual and inelienable right which “cannot by any means be suppressed,” the Pope states. However, he points out:

“It is reserved to human will and the juridical forms of the peoples to regulate with more detail the practical realization of that right.”

But what are governments doing to establish a legislation ensuring the practical realization of that right? They have financial rules that create hindrances instead of making things easier. Employment conditions, when progress is increasing the flow of production while diminishing the necessity for employment; to have to be employed when 16 million Canadians in the work force are sufficient to supply 35 million Canadians with the production required for their needs.

Social Credit would guarantee a first level of life, without condition, to those 35 million people, while recognizing the right to a remuneration, besides this first income, for the 16 million people still employed in production.

To that end, the Social Credit economy would have a money system that serves, instead of a system that leads and conditions the life of men.

The great modern economic heresy is to consider money a commodity, an end instead of a pure means. And end for all enterprises. If today a shoe factory, for example, does not bring in money to the entrepreneur, it closes down, even if there are people who still need shoes. Its primary end is not to supply men with shoes, but to make money.

In his radio-address, Pius XII defined national economy: “The activities of men combining their work in the national community.”

“National economy aims at nothing but to ensure without interruption the material conditions in which the individual life of the citizens will be able to develop fully.”

Here is the foundation of a real human economy, and especially a Christian economy: “To ensure,” not to submit to conditions that cannot be fulfilled by all.

To ensure what without interruption? To ensure the “material conditions in which the individual life of the citizens will be able to develop fully.” To develop “fully,” not a quarter or half of it, not a development limited by the smallness of a share granted after humiliating, prolonged and repeated means tests, which aim to degrade the human person instead of making his self-development easier.

And it is not so much collective life that must develop fully as, always according to the text, the “individual” life of the citizens: the life of each human person.

Nothing of this is made easier, much less guaranteed, in the economy corrupted from top to bottom by the present financial system. The financial system controls all of the economy instead of being submitted to it with a view to its true end. It is Mammon installed as manager between God’s gifts and men, the children of God. And the governments of our nevertheless Christian countries accept this management, this dictatorship of Mammon, this perversion of the specific ends of economy.

Modern material progress should relieve men of their worries about material bread and allow them to consecrate themselves to other human tasks, nobler, more cultural, more spiritual, more enriching for man in his entirety than the sole economic task. This is what a Social Credit economy would make easier.

To request Social Credit from Mary is therefore to ask her to put an end to the heresy of money as an end rather than as a means; to the cult of Mammon; to the perversion of economic life; to the enslavement and degradation of human persons by the dictatorship of a small group of money masters.

The Social Crediters of MICHAEL leave no stone unturned to spread the light of Social Credit, to win acceptance for the Social Credit conception of the distribution of wealth, to remind people of the end of economy, which is the service of human needs and not the pursuit of money. But to our efforts, we add the appeal to Heaven, for the satanic powers behind the financial dictatorship are so entranched that governments dare not to attack them. They have succeeded in shutting up people who should speak out against this monster, which is a source of injustice, undeserved sufferings, conflicts, revolts, disorders, wars, revolutions, that led to Communism and other dictatorial regimes.

To those who, instead of asking for information, prefer to shrug, through laziness or prejudice or because their vested interests in the system make them close their eyes on legalized injustices, I will just quote a few sentences from a priest who took the trouble to make a thorough study of the subject. This priest is Father Peter Coffey, now deceased, but then a Doctor in Philosophy and professor of metaphysics and logics at the famous Maynooth College, in Ireland. He wrote, on March 23, 1932, in a letter to a Canadian Jesuit:

“The accuracy of the analysis carried out by Douglas has never been refuted, and his Reform proposals with their famous price-regulation-formula, are THE ONLY reform that will go to the root of the evil.

“Personally I am convinced that capitalist finance must inevitably breed wars, revolutions and artificial starvation of millions in a world of potential plenty.

“I have studied the whole subject for 15 years, and I believe that such a financial reform as proposed by Douglas is essential to the reinstatement of a Christian economic system of widely diffused ownership, and is therefore the only alternative to a revolutionary violent and Godless Communism.

”As to whether the constructive Proposals for reform advocated by Douglas are possible in the concrete — with the mass-psychology of a doped public and all the propagandist power of the Capitalist Press against them — that is in the lap of the gods! Only — as I see it — the alternative to their adoption is the chaos of Communism. All the intent of the tragic transition from Capitalism to Communism now centers exclusively in finance.”

To ask Heaven to knock down the obstacles to Social Credit is therefore to ask for a powerful weapon to be opposed to the existing financial dictatorship.

If one finds quite normal to pray to the Blessed Virgin for the relief of a head or stomach disease, why should one be scandalized by seeing the Social Crediters requesting from Mary the coming of a Social Credit economy, against the artificial starvation of a multitude of human beings, against the management of Mammon, against the advance of a centralized financial power that is being set up under the pretext of relieving the victims of a system that one refuses to broach?