Written by Louis Even on Tuesday, 01 May 1956. Posted in An Efficient Financial System

The importance of money 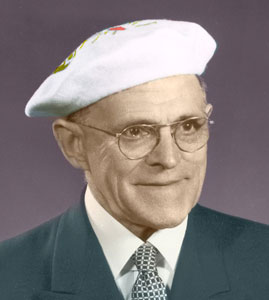 Under past economic systems where my neighbour would produce what I needed, and I, what my neighbour needed, bartering was the proper thing to do.

But this primitive economy is long gone. Nowadays, except for some of the farmers’ products, everyone’s products are intended for the public market, and everyone requires the public market to provide them with all they require. Under such an economic system, money plays a vital role.

Man no longer works alone. Production means are pooled. Manpower is pooled. There are employers and employees. There exists a division of labour. As far as global productivity is concerned, great progress has been achieved : More products are thus thrown upon the open market.

The employer will no doubt reward his employee for his work. But this reward cannot consist of products made by the employee. If Paul makes shœs year round, his employer will not pay him with shœs. Other goods are needed by Paul and his family. If Jim works in a paper mill year round, he will want something other than wood pulp in return for his services.

That “something” is what Paul and Jim, or their wives, will choose on the open market, according to their families’ needs.

If either Paul or Jim’s employer has no money, he will be unable to hire workers or to run his factory. His production will stop for lack of money. Physically, the production of shœs or wood pulp would remain possible but, financially, such production would be impossible. It would not be made.

In the same way, if all of the Pauls and Jims, if all of the families in the country are provided with enough money, they will be able to choose, on the public market, the products they need. But if they lack money, they will not be able to do so, no matter how many products there are on the market. Unsold products will pile up, producers will reduce their activity and lay off employees, thus creating unemployment which will further slow down the distribution of goods.

The above is true-life history. How many manufacturers have had to close down in part or in whole, temporarily or for good because they lacked the money that the banks would refuse to lend them ? And how many among the consumers — fathers, mothers, entire families, young men and young women — have had to suffer want, to do without necessities, or contract long-term debts just to ward off starvation simply because they did not have the means to pay for the products offered on the market !

Decisions were taken with respect to finance, and not as a function of realities as is often the case today.

This is also true of public administrations. Aqueducts can easily be built when towns have the money to pay for them. When they lack the means to pay, they have to wait or borrow the money, thus paying more to financiers who produce absolutely nothing.

Whether to satisfy private needs or public needs, it is finance that makes the final decision. Yet, men most certainly did not invent the financial system so as to be penalized, nor to be placed under trusteeship.

It is this flaw which, introduced gradually into the financial system, has turned it into a dictator, when it was conceived to serve men.

Financial problems ought not to exist. Today, money can easily be made. This is attested by the fact that a world that went without money for ten years did find overnight all the money, all the billions it needed, to wage a global war that would last six years.

Social Crediters argue that “whatever is physically possible and desirable should, by that very fact, be made financially possible.”

It is not a matter of promising the moon. It is a matter of committing ourselves to reaching an end that can readily be attained. We are not the only ones who say that this can be done. A man well versed in the ways of finance, Graham Towers, who was also the first governor of the Bank of Canada, held the same position.

This was in 1939. A few months later, war broke out. And subsequent events proved that it was quite easy to render financially possible all that was materially possible. There was no purely financial problem as far as conducting the war was concerned.

President Roosevelt called these purely financial problems “nonsense” — and so they are ! When his country entered the war, he declared publicly that he would not allow the war effort to be handicapped by financial nonsense.

But what the president failed to do was to prevent the financial barons from making this a temporary measure only, and from entering these credits in the nation’s books as an accumulation of debts upon the nation once war was over.

Is it physically possible to provide enough food, clothing, housing, and medical care in order that all people might have their basic needs met ?

No one would dare deny that it is possible — physically possible. Today, if needs are not met, it is because the financing of production is lacking, or else, because the money required to answer needs is missing.

The same applies to the needs of municipalities, school boards and other public bodies. In as much as public development projects are physically possible, they must be made financially possible. Money must reflect realities. It must not limit realities. New money must be created whenever new wealth is made, and money must be cancelled out only at the rate at which consumption takes place, the rate at which wealth disappears.

Only then will you have a humane economy. Not an economy that is designed by bureaucrats and politicians, but an economy that is regulated by the consumers themselves, private and public. An economy that is not directed, but one that answers the clearly-stated needs of free men possessing the means (money) to demand what they wish to obtain.