There Is No Unemployment Problem — There Is a Dividend Problem

Written by Gilberte Côté-Mercier on Wednesday, 01 February 1961. Posted in In This Age of Plenty (book)

In this age of plenty - Chapter 36

Unemployment is not a problem. On the contrary, it's a blessing. It's an objective; a goal sought for centuries by scientists, by universities, by intelligent people.

Unemployment, free time, leisure: do not all people wish for this fervently? Did not studies throughout the evolution of civilization, in a great part, have as a goal to develop science in such a way, more and more, so that machines would be added to human hands, even to reach the point of completely replacing human labour, and to produce an output infinitely greater than mere manual labour can? Did we not succeed in inventing machines which do the work in our place? Electronics even leads us to replace the human minds for calculations. Isn't this marvellous? Yes, indeed!

What is marvellous is the genius and the discoveries, the plentiful production stemming from these discoveries, to end up with so much production with much less work. So, people should now be able to relax and take a rest! Of course, since producing more while working less must certainly mean “to be able to rest”! Don't you think so? To be unemployed means to stop working, to rest. (God rested on the seventh day of the Creation, says the Bible. This is why man is commanded to stop working, to rest, on Sundays.)

When unemployment becomes widespread, it means that a great number of workers are at rest, and that the products for their needs come to them, just the same.

So if unemployment becomes widespread, in every country in the world, one must rejoice, since it represents both rest and the existence of useful goods, the possibility of resting while the basic necessities of life are being produced, just the same.

Well, despite all of this, people are not thrilled about unemployment; they rather moan about it. They complain about progress; they bemoan the fact that machines are working in place of them and giving more results, without tiring them. The whole world moans over progress, the machine, rest, unemployment.

A lack of money

Some people might say: “Well, when we are unemployed, we have no money!”

There is no unemployment problem. And it is because authorities persist in wanting to settle the problem of unemployment — a problem which does not exist — that they settle nothing at all!

There are some people who propose to put the machines away, and to harness men in the place of the machines to allow them to earn wages. Is this not stupid, especially since the machines can produce more in less time and without any sweat whatsoever? Why not give free money to the workers, and then let them watch the machines do all the work? This would be money given to people for doing nothing, instead of letting the machines do nothing.

Some might retort: “Giving money to people for doing nothing would be a dividend!” Exactly, it would be a dividend. And therein lies the problem: it is not an unemployment problem, but a dividend problem. It is not a production problem, but a distribution problem. One must not seek to make people work in the place of machines, but seek to distribute the products of the machines to people who have needs, without forcing these people to work, since the machines are working in their stead.

— But, who will be paying for this dividend? — Society, since it is a social dividend. — But will not society tax us for it? — Not at all. If society was to tax us, it would be removing money from us. It would be the opposite of giving us money, the opposite of the dividend. We must get free money, money given to purchase progress. It is not taxes that we need.

— But from where will society take this money to give to everyone? From where will Canada take so much money to give out to all Canadians? — From the accounting ledgers. Money is basically a matter of bookkeeping; it is figures. The monetary system is put into function by the banks. And at the head of our banking system, we have the Bank of Canada.

The Bank of Canada must see to the issue of necessary money in order for each Canadian to get a dividend, each month — let us say of at least $800 — so that each Canadian can purchase his share of the products from progress, products manufactured by the machine.

Finished with the headache of unemployment

And what about unemployment? Well, it will no longer be an issue. There will no longer be what is called the unemployment problem, if everyone gets a dividend. The storekeepers will sell their products. The manufacturers will manufacture more. The unemployed will be called back to work. And all desired products will be sold. And when there are too many products in comparison with needs (when the supply is greater than the demand), the production will slow down, increasing leisure, spare time. And the dividend will increase as the mechanized production increases. The fruits of our labour will always be paid for by our wages. And the fruits of the machines will be paid for by the dividends.

Without the social dividend, progress makes starving unemployed workers. With the dividend, the unemployed will be financed. Unemployment will be called leisure for free men, time available for free activities. The wealth of great lords is leisure. A really rich man is one who can dispose of his time as he pleases, not one who is harnessed to earn a living like a beast of burden.

The socialists and leftists in our universities and State schools, in our trade unions, in our media, and in most associations, want man today to continue to be harnessed. They call for full employment. On the contrary, the Social Crediters want man to be really enriched by progress, to be liberated by the machine. They want man to dispose of his time for his culture, for studying the arts, philosophy, for charity; they want man to be really civilized! Social Credit is a doctrine of high civilization, of true Christianity. To be hired is to get trashed by the controllers, who are thirsty for little or great power, political and civil power — absolute power in the countries under the yoke of Moscow, or more and more tyrannical power in the so-called free countries which are really under the yoke of International Finance.

As long as our university scholars do not call for the social dividend, one may question what is the use of enlarging universities, and to pay for everyone's education. Today's progress is not distributed; machines are put away, men are harnessed like horses, and are left starving amidst plenty. Yet, our universities have already cost us millions. What a success our sacrifices for our schools have given us! Look at the unemployed without bread; look at those who are hired to work with pick and shovel. It was not really worth the trouble to be so learned. Before enlarging and multiplying schools, it would be far better to teach Social Credit in the schools that we now have; to teach students, and teachers as well, about the dividend, and to make them realize that there is no unemployment problem, but rather a social-dividend problem. 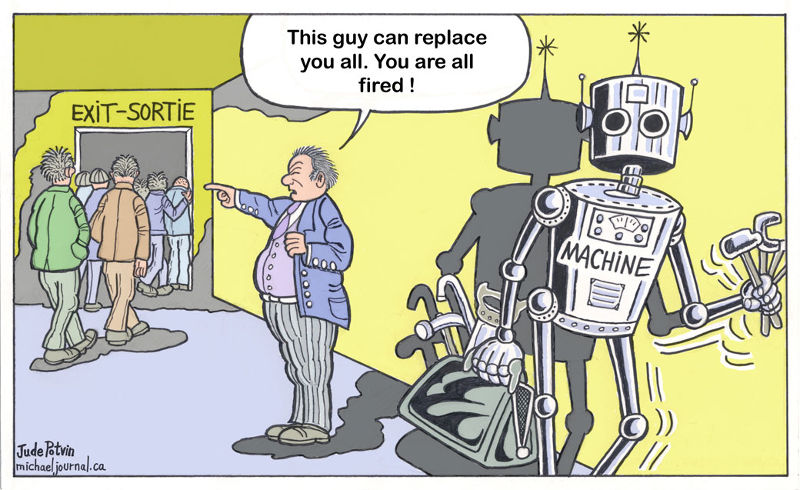