The pen that rules the world

Written by Louis Even on Sunday, 01 June 1941. Posted in Social Credit

This article, written by Louis Even in 1941 during World War II, still applies today:

Do you see this pen?

It is the banker's pen. It writes figures in his ledger. 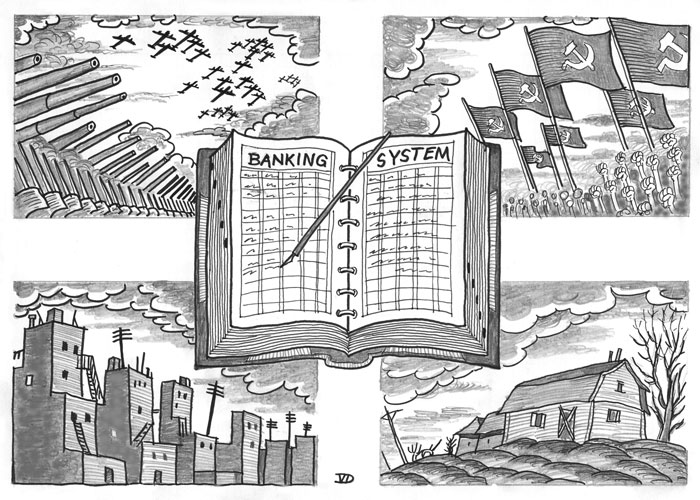 When an industrialist, a businessman, or the government itself comes to borrow money from the bank, the banker inscribes this loan in his ledger. He does not lend paper money nor coins. The money he inscribed will increase the account of the borrower. It is new money that will be distributed in the nation by the borrower.

When the borrower collects money throughout the nation, through his sales or purchases, to pay the loan back, the banker will inscribe again the same amount in his ledger, but it will be added to the account of nobody. Nobody can draw cheques anymore on this repayment. It is now dead money.

A loan creates, gives birth to new money; the repayment of a loan cancels money, puts it in a coffin. All this takes place in a bank, and nowhere else.

The bankers ask the borrowers to bring back to them more money than was created, and nobody except the bankers can create money. If the repayments are made as agreed, there is less money left in circulation in the nation. If an individual cannot meet his payments, the banker will seize the properties used as security for the loan. For some borrowers to be able to pay back their loans in full, there must be, inevitably, other borrowers who cannot meet their loans, since more money must be returned to the bank than what was created by the bank. (Don't forget, only banks can create money.)

Bankruptcies of industries, of businesses and farms are therefore a natural outcome of the present banking system.

As for governments, they can never pay back all that they borrowed; they just add the sum to the public debt. The public debt represents money that does not exist, but that the bankers want to be paid back just the same.

The public debt keeps growing, and so does the interest on this debt. Taxes keep increasing, the pockets of the taxpayers are emptied, and everybody has to do without.

When loans come faster than repayments, a kind of temporary prosperity exists. This is what happens with wars. Once the war is over, it is time to pay back the loans, and the unemployment rate rises again.

One needs money to finance wars, but don't worry, they will never lack money for wars. They never did. The pen of the banker is ready to write more figures for wars. (The war in Iraq is another proof of it.) It is in peacetime, for peace and works of peace, that money is lacking.

Look at the drawing below. Where can wealth be found? It can be found above, with cannons and airplanes for war. (In 2003, it can be found in missiles and nuclear bombs.) It can also be found, in appearance, in the march of the Communists for power. The Bolshevik Revolution of 1917 was financed by the big banks of New York City. (It is also the big banks that are preparing World War III to impose upon us all a Communistic world government.)

Look at the bottom of the drawing: on the left, you can see the slums of cities, where human capital vegetates and suffers. The pen of the banker is not interested in human lives; they are not profitable for the bank.

On the right you can see an abandoned farm. The farmer in question could not sell his production with a profit, since money had become too scarce, because of the banker's pen that requires more money than it creates. This farm no longer yields production; it is a destruction of what human beings need. The family of this farmer suffers today because of the pen of the banker. And how many others are on the same path!

Only the banker's pen does all of these things. The pen of the government only signs the debts. This is why the right to create and destroy money must be taken away from the banker's pen. We need a social money, a social credit, for the common good of all the members of society.