Written by Louis Even on Sunday, 16 October 2016. Posted in In This Age of Plenty (book)

In this age of plenty - Chapter 9

The situation can be summed up in this inconceivable way: All the money in circulation came from a bank. Even metal and paper money come into circulation only after it having been released by a bank.

Now, banks put money into circulation only by lending it out at interest. This means that all the money in circulation came from the banks, and must someday be returned to the banks, with the added interest.

Banks remain the owners of the money. We are only leasing it. If some people manage to hang on to their money for a long period of time, or even permanently, others are necessarily incapable of fulfilling their financial commitments.

An increasing number of bankruptcies, for both individuals and companies, mortgages upon mortgages, and continued growth of public debts, are the natural fruits of such a system.

Claiming interest on money as it is created is both illegitimate and absurd, antisocial and anti arithmetic. The monetary defect is therefore a technical defect as well as a social defect.

As the country develops, production-wise and population-wise, more money is needed. But it is impossible to get new money without contracting a debt which collectively cannot be paid.

We are left with two choices: We either stop development or go deeper into debt; we either join the unemployed or we contract unpayable loans. All countries now face this dilemma.

Aristotle, and later Saint Thomas Aquinas, wrote that money does not breed money. But the banker only creates money under condition that it should breed more money. Since neither governments nor individuals create money, no one creates the interest claimed by the banker. Even when legalized, this way of issuing money remains vicious and insulting.

Forfeiting of power and abject poverty

Sovereign Government has become a signatory of debts owed a small group of profiteers. The minister, who represents millions of men, women and children, signs unpayable debts. The banker, who represents a clique interested only in profit and power, manufactures the country’s money.

This is a striking aspect of the forfeiting of power spoken of by the Pope: "Governments have surrendered their noble functions and have become the servants of private interests."[1]

The Government, instead of ruling the Country, has become a mere tax collector; and its largest expenditure is none other than the payment of interest on the national debt.

There are laws to ensure that the creators of money be repaid. There are no laws to prevent a human being from dying of extreme poverty.

As for individuals, the scarcity of money leads them to adopt a dog eat dog mentality. In front of abundance, people must fight to get a hold of some of the precious tokens that give access to abundance. Ensues unbridled competition, patronage, denunciations, dictatorship of labourers, domestic strife, etc.

A small number of individuals preys on the others; the greater number laments itself, with many in the most degrading poverty.

The sick remain without care; children are poorly or insufficiently nourished; talents cannot be developed; the young can neither find a job nor start a home or family; farmers lose their farms; industrialists go bankrupt; families struggle along with difficulty — with no other justification than the lack of money.

The banker’s pen imposes privation on the people, servitude on governments. 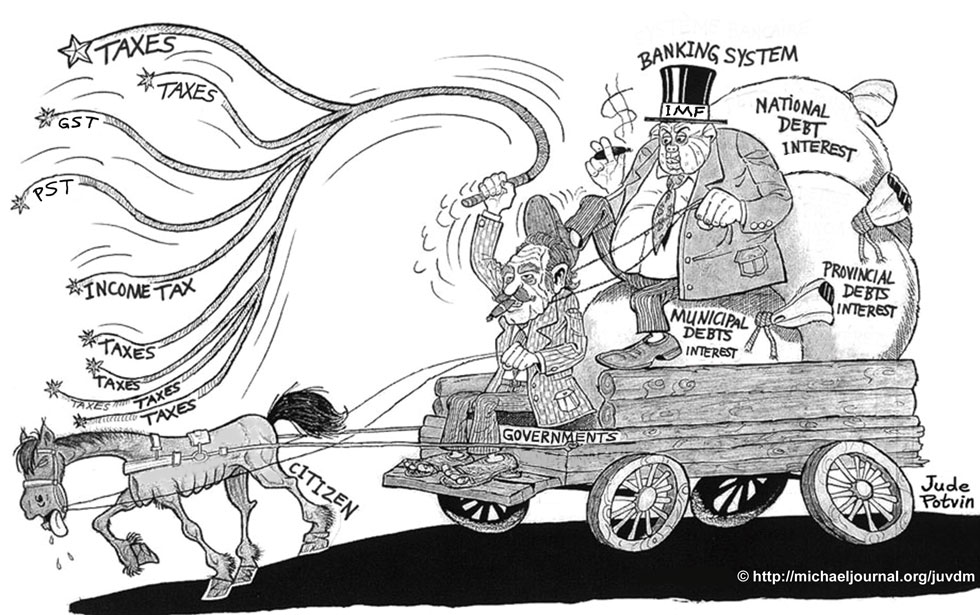