The Goldsmith Who Became a Banker — A True Story

Written by Louis Even on Thursday, 01 October 1936. Posted in In This Age of Plenty (book)

In this age of plenty - Chapter 26 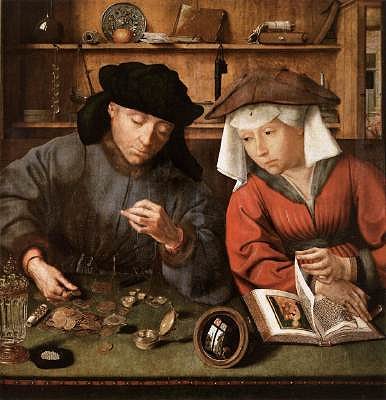 Let us go back in time, say a few centuries ago, to a Europe that is already old but where little progress has been made, where the art of war and persecution is foremost, but a Europe that is slowly awakening to the stories told by the adventurers and world-travelers. It might have been during the time when Jacques Cartier climbed Mount Réal, led by the old Indian Chief who wanted him to marvel at the magnificent scenery of forests and rivers before which, even a Native’s soul, could not remain indifferent. Or was it before Columbus had set sail for the great unknown in trying to reach Asia by traveling west?

In those days, there was little money used in everyday trading. Most transactions consisted of barter-exchanges. Only the kings, the lords, the wealthy and the more important merchants owned gold and used it to pay for the expenses incurred for their armies or to obtain foreign goods.

But the wars between lords or between nations and armed robberies were causing the gold and the diamonds of the wealthy to fall into the hands of thieves. Therefore, gold owners made a habit of entrusting their treasures to the goldsmiths who owned well protected vaults because of the precious metal they worked with. They took possession of the gold; they gave a receipt to the depositor; they safeguarded the gold and charged a fee for doing so. Of course, the owner could claim his gold at all times, in full or in part, whenever he felt like it.

The merchant who left Paris for Marseilles, or Troyes for Amsterdam, could provide himself with gold to make his purchases. But, again, there remained the danger of being attacked along the road; he then convinced his seller in Marseilles or Amsterdam to accept, instead of gold coins, a signed receipt attesting to his claim on part of the treasure on deposit at the goldsmith's in Paris or Troyes. The goldsmith's receipt bore witness to the funds’ existence.

The supplier, in Amsterdam or elsewhere, eventually managed to get his own suppliers in London or Geneva, in return for transportation fees, to accept the receipt he had received from his French buyer. In short, little by little, the merchants began to exchange these receipts rather than the gold itself, so as not to move the gold unnecessarily and so as not to be attacked by thieves. Therefore, a buyer, rather than retrieving a gold bar from the goldsmith to pay off his creditor, gave the latter the goldsmith's receipt which thus gave the creditor a claim on the gold that was kept in the vault.

Instead of the gold, it was the goldsmith's receipts that were changing hands. For as long as there was a limited number of sellers and buyers, it was not a bad system. It was easy to follow the journey taken by the receipts.

But the goldsmith soon made a discovery that would affect mankind in a much greater way than Christopher Columbus’s memorable journey. He learned, through experience, that nearly all of the gold that was left with him for safekeeping remained untouched in his vault. Hardly more than one-in-ten of the gold owners ever came to withdraw some of the precious metal. They would rather use his receipts in their business transactions.

The thirst for profit, the longing to become rich more quickly than by handling a jeweler’s tools, sharpened the mind of our man, and instilled daring into him. “Why,” he told himself, “why not become a gold lender!” A lender, mind you, of gold that did not belong to him. And since he did not possess a righteous soul like that of Saint Eligius (St. Eloi was the Master Engraver for French kings Clotaire II and Dagobert I, in the seventh century), he hatched and nurtured the idea. He refined the idea even more: “To lend gold which does not belong to me, at interest, needless to say! Better still, my dear master (was he talking to Satan?), instead of the gold, I will lend a receipt, and demand payment of interest in gold; that gold will be mine, and my clients' gold will remain in my vault to back up new loans.”

He kept the secret of his discovery to himself, telling not even his wife who wondered why he often rubbed his hands in pure glee. The opportunity to set his plan in motion was not long in coming, even though he did not have “The Globe and Mail” or “The Toronto Star” in which to advertise.

One morning, a friend of the goldsmith actually came to see him and asked for a favor. This man was not without fortune — a home, or a farm with arable land — but he needed gold to settle a transaction. If he could only borrow some, he would pay it back with an added surplus; if he failed to do so, the goldsmith would seize his property, which far exceeded the value of the loan.

The goldsmith did not have his arm twisted for very long before telling his friend, with a disinterested look on his face, that it would be dangerous for him to leave with such a large sum of money in his pocket: «I will give you a receipt; it is as though I were lending you the gold that I keep in reserve in my vault; you will hand your creditor this receipt and if he comes around, I will give him the gold. You will owe me this much interest».

Most of the time, the creditor never showed up. He would pass on the receipt to someone else. In the meantime, the gold lender’s reputation grew. People came to him. Thanks to similar loans, which the goldsmith granted, there was several times more receipts in circulation than actual gold in the vault.

The goldsmith had in fact put money into circulation, at a great profit to himself. He quickly got over the nervousness he first felt at the thought of a rush on gold involving a great number of people holding receipts. He could, to a certain extent, continue to safely play his game. What a windfall: To lend what he did not have, and to draw interest upon it, thanks to the confidence that people had in him, a trust that he took great care to cultivate! He risked nothing, as long as he had, to back up his loans, a reserve that his experience told him was enough. If, on the other hand, a borrower did not meet his obligations and did not repay the loan when due, the goldsmith would acquire the property given as collateral. His conscience waned rapidly and his initial scruples no longer bothered him.

The creation of credit

Moreover, the goldsmith thought it wise to change the formula and upon lending money, instead of writing: “Received from John Smith...” he would write: “I promise to pay the bearer...” This promise circulated the same as gold money. Incredible, might you say. Come now, look at today’s dollar bills. Read what it written on them. Are they so different, and do they not circulate as money?

A fertile fig tree, the private banking system, the creator and master of money, had grown out of the goldsmith's vault. His loans, without displacing any gold, had become the banker's credit creations. The earlier receipts had changed, taking the form of simple promises to pay on demand. The credits paid by the banker were called deposits, which lead people to believe that the banker only lent out the amounts he got from the depositors. These credits entered into circulation by means of checks that people issued to one another. They displaced, in volume and in importance, the Government’s legal tender, which would only play a secondary role from then on. The banker created ten times more currency in circulation than the State did.

The goldsmith turned banker made another discovery: he realized that putting plenty of receipts (credits) into circulation would accelerate business, industry, construction; whereas restriction of credits, he had practiced at a time when he first feared a run on the bank for gold, would paralyze the expansion of business. There appeared to be, in the latter case, what seemed to be overproduction while people were doing without; it is because products did not sell due to a lack of purchasing power. Prices would go down, bankruptcies would multiply, the banker's debtors could not meet their obligations, and the lender would seize the properties given as collateral.

The banker, very shrewd and skillful when it came to gain, saw his chances, magnificent chances. He could monetize the wealth of others for his own profit: by doing it liberally, he could cause prices to rise, by doing it with parsimony, he could cause prices to fall. He could therefore manipulate the wealth of others as he pleased, thus taking advantage of the buyer in times of inflation, and of the seller in times of recession.

The banker, master of the universe

The banker thus became master of the universe, he held the world at his mercy. Periods of prosperity and periods of depression alternated. Humanity bowed down before what it thought were natural and inescapable cycles.

Meanwhile, scholars and technicians were striving to triumph over the forces of nature and to develop better means of production. The printing press was invented, education became widespread, cities and better housing were developed. The sources of food, clothing, and living comfort were increased and improved upon. Man overcame the forces of nature, he harnessed steam and electricity. Transformation and development occurred everywhere — except in the monetary system.

And the banker surrounded himself with mystery. He kept alive the trust that a captive people had in him. He went so far as to have the media, whose finance he controlled, proclaim that banks had taken the world out of barbarism, that they had opened and civilized the continents. The scholars and wage-earners were to be considered as secondary instruments in the march for progress.

For the people, there was misery and contempt; for the financial exploiter, riches and honors! Like his worthy successor, Herbert Holt (the chairman of a large Canadian bank, in 1936), who was honored, adulated, sired, the financial exploiter demanded respect from the people that he bled: «If I am rich and powerful while you are suffering the stranglehold of poverty and the humiliation of social assistance; if I was able, at the peak of the Depression, to make 150% profits each year, it is because of your foolishness, and for my part, the fruit of a wise administration».

This article was written by Louis Even and was first published in the October, 1936 issue of the “Cahiers du Crédit Social.” (Social Credit Notebooks)