The Bank of Canada must finance our country, debt-free

Thanks to the sacrifices that have been made for over sixty years by the “White Berets” of MICHAEL and “Vers Demain”, more and more people in high places are discovering the absurdity of the present financial system, and the urgency for the Federal Government to create its own money, interest free, instead of borrowing it at interest from private banks. Here are excerpts from a pamphlet published in 1992 entitled “The Deficit Made Me Do It!”, edited by Ed Finn, of the Canadian Centre for Policy Alternatives (www.policyalternatives.ca), in which three economists—Harold Chorney, of Concordia University in Montreal, John Hotson, of the University of Waterloo, and Mario Seccareccia, of the University of Ottawa—“debunk the myths about government debt,” and repeat, in their own words, what Louis Even and the Social Crediters of MICHAEL have been explaining since 1939. (An updated version of this pamphlet, entitled “10 Deficit Myths”, was issued in January, 1996,)

Here is a text that makes a change with the conventional speeches of economists that are disconnected from reality. Moreover, this text points out the real problems and solutions concerning the public debt, at a time when several people are talking about slashing government spending—even social programs, like the pensions and unemployment insurance—to reduce the deficit. The subtitles are from MICHAEL:

Governments these days find it easy to defend cuts in services and programs. All they have to do is point to their annual deficits and their total accumulated debts. This public debt provides the politicians with a convenient excuse for cutting spending or raising taxes. Or both. “We’re broke,” they tell us plaintively. “We can’t afford to increase public services, or even keep them at their present level.”

A lesson of war

But it doesn’t take an economist to see that in fact they could. All you have to do is imagine what the government would do if it got involved in another Gulf War — or if that war were still raging. Would the Finance Minister have brought down the same kind of budget? Would he have said, “We’d like to keep on fighting, but we’re broke, so we’re calling our troops back”? Not on your life!

Did Canada surrender half way through World War II because the national debt had grown even larger than the Gross Domestic Product (GDP)? Of course not! Somehow the extra money was found. If it wasn’t by raising taxes or borrowing from the private banks, why, the Bank of Canada simply created all the money the government needed—and at near-zero interest rates, too!

When World War II ended, the national debt relative to the national income was more than twice as large as it is now. But was the country ruined? Did we have to declare national bankruptcy? Far from it! Instead, Canada’s economy boomed and the country prospered for most of the post-war period.

The Bank of Canada has failed in its duty

Why isn’t the same thing happening today? Why was a much larger national debt shrugged off in 1945, while today’s much smaller debt (as a percentage of GDP) is being used as an excuse to let the economy stagnate?

The answer can be found at the Bank of Canada. During the war, and for 30 years afterward, the government could borrow what it needed at low rates of interest, because the government’s own bank produced up to half of all the new money. That forced the private banks to keep their interest rates low, too.

Since the mid-1970’s, however, the Bank of Canada, with government consent, has been creating less and less of the new money, while letting the private banks create more and more. Today “our” bank creates a mere 2% of each year’s new money supply, while allowing the private banks to gouge the government— and of course you and me, as well—with outrageously high interest rates. And it is these extortionate interest charges that are the principal cause of the rapid escalation of the national debt.

Thousands of years of sad experience with the concentration of wealth and debt slavery caused all the ancient books of wisdom—including the Bible and the Koran—to condemn the charging of immoderate rates of interest... The conventional wisdom, however, is that inflation is the greatest threat to the economy and must be restrained by raising interest rates. This flies in the face of the common-sense observation that rising prices (inflation) are caused by rising costs, and that interest rates are costs. So raising them will raise prices, not lower them.

Also raised by this policy, of course, is the income of the money-lenders, which explains why they subscribe so fervently to the perverse doctrine that high interest rates are somehow anti-inflationary... Yet, most of the economic textbooks that deplore rising wages don’t even mention the tax and interest pushes. And it is not because they are complex ideas—rather, they are simple and obvious — but because it would be so embarrassing for economists to admit they’ve made a boner of such magnitude: that their theory of monetary policy violates basic principles of scientific logic.

The creation of money

One of the most pervasive myths about the government deficit is that governments which spend more than they receive in revenue must borrow the difference, thus increasing the public debt.

In fact, a government can choose to create the needed additional money instead of borrowing it from the banks, the public, or foreigners.

Business and the conservatives in politics and the media are horrified by the suggestion that the government exercise its right to create more money. They claim it would precipitate another ruinous bout of inflation.

But money creation is money creation—whether by a private bank or the Bank of Canada. And a government in debt only to the government’s own bank is not really in debt at all. If it wants to go through the rigamarole of having the Treasury “borrow” from the central bank and later pay interest, that is a minor matter of bookkeeping. As long as the central bank’s profits are returned to the Treasury, the results are much the same as if the Treasury had created the money itself.

There is no reason why the growth of Canada’s money supply (averaging about $22 billion annually in recent years) could not be more substantially created by the Bank of Canada. If that policy had been followed, the federal government would not have been obliged to add to its debts to pay interest on old debts.

A return to the policies of the World War II era, when the Bank of Canada produced almost one-half of the new money at near-zero interest, would do wonders for the economy, while greatly shrinking the deficit.

It is ludicrous for the government to put billions of dollars into circulation by borrowing from the private banks, when it can create the extra money it needs, virtually free.

We have to keep in mind that our monetary economy only grows when the money supply grows. Under the present debt-driven system, the only way we can increase the money supply is by borrowing it into existence from the private banks, thereby increasing our indebtedness to them.

It can’t be stressed too much that the private banks, unlike non-bank lenders, create the money they lend. They do not—as is so widely imagined, even by the bankers themselves—lend their depositors’ money. The amount of new money created by a bank loan, however, is only sufficient to pay back the principal. No money is created to pay the interest, except that which is paid to the holders of bank deposits. That’s why debts must continually grow faster and faster in order for each layer of additional debt and interest to be paid.

If that strikes you as a very dumb and dangerous way to operate a monetary system, you’re right. Clearly it would be much safer and more sensible to have at least a large amount of the needed new money spent into circulation debt free by the federal government— or lent by it interest free to the junior levels of government which lack the power to create money. Reform of the monetary system is therefore the key to controlling the deficit and lowering the public debt. (End of the three economists’ pamphlet.) 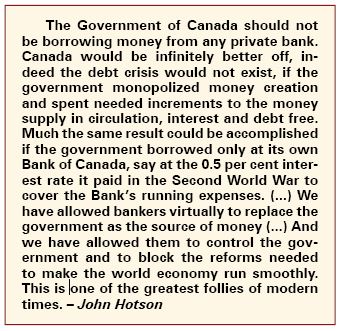