Written by Louis Even on Thursday, 15 March 1945. Posted in In This Age of Plenty (book)

In this age of plenty - Chapter 32

We believe that there is nothing in the world that has lend itself to more abuse than money has. Not because money is of itself a bad thing. On the contrary, money is probably one of man's most brilliant inventions. It gives exchanges greater flexibility, it promotes the sale of goods that answer needs, and it makes life in society easier.

But, to worship money is to worship an idol. To think that money is alive and that it can give birth to more money, goes against nature.

Beginning in the days of the Old Testament, followed by Protestants and later by corrupt Catholics, everyone has sided with the theory and mainly the practice that money must bear interest. And in spite of all the Christian teaching to the contrary, the practice made so much headway that, so as not to lose in the hellish competition around the fertility of money, everyone must behave today as though it were natural for money to breed money. The Church has not abrogated her laws of old, but it has become impossible for Her to insist on their application.

The methods used to finance today’s crusade, World War II, in which we have become the acolytes of Churchill, Roosevelt and Stalin to defend Christianity, have solemnly consecrated the rule by which money must bear interest,  whether it be money that is thrown into the sea or money that is thrown into the flames of burning cities. We refer here to the Victory Bonds that finance destruction, that produce nothing but that must bear interest anyway.

So that our readers might not pass out thinking of the savings they invested in industry or otherwise, let us make a few distinctions.

If money cannot grow on its own, there are things that money can buy that would logically bear fruits. If I invest $5,000 to purchase a farm or some animals, seeds, trees, machinery, by applying some intelligent work to these things, other things will be produced.

The $5,000 was an investment. By itself it has not produced anything; but thanks to this $5,000, I have been able to buy things that have produced.

Let us suppose that I did not have this $5,000. But my neighbour had it and he did not need it for several weeks. He lent it to me. I think it would be proper for me to show my gratitude by letting him have a small portion of the products that I obtained thanks to the productive capital that he has provided.

It is my work that has made his capital profitable. But this very capital represents work that was accumulated. There are therefore two of us whose activities, past activities in his case, present activities in mine, that have caused products to appear. The fact that he waited to draw upon the country's production, by not using the money he received as a reward for his work, allowed me to get the means of production that I would not have gotten otherwise.

We can therefore share the fruits of our collaboration. There remains to determine, through agreement and equity, what part of production is owed to capital.

What my lender will get in this case is, strictly speaking, a dividend. (We have divided the fruits of production.)

A dividend is perfectly justified when a production bears fruit.

This is not exactly the meaning we give to the word “interest”. Interest is a claim made by money, as a function of time only, and without regard to the results of the loan.

Here is one thousand dollars. I invest it in federal, provincial or municipal bonds. If the bonds bear 4% interest, I will receive 40 dollars in interest every year, just as surely as the earth goes around the sun once every year. Even if the capital is lost, I will still get my 40 dollars. That is the meaning of interest.

There is nothing that justifies this claim, apart from the fact that it is customary. This claim does not rest upon any principle.

In practice, money that is deposited at the bank is invested indirectly in production. Bankers are professional lenders. Depositors entrust their money to the bankers because they know that the bankers are more likely to make a profit, without their having to worry about anything.

The small interest that the banker enters to the depositor's credit from time to time, even at fixed rates, is in fact a dividend. It is a part of the benefits that the banker, with the collaboration of investors, has obtained from productive activities.

For the record, let us say a word on the morality of investments.

Many people are not the least preoccupied by the usefulness or the harmful effects of the activities that their money will finance. As long as it yields profits, they say, it is a good investment. And the more profit it yields, the better the investment.

A pagan would not reason any differently.

Besides, it would be preferable that the investor and entrepreneur be more closely associated. The smaller industry of old was sounder: The investor and entrepreneur were the same person. Today, the cornerstore owner is still in the same position. The chain stores are not. The co-operatives and small businesses help to keep the relation alive between how money is used and those who own it; they also allow for the development of smaller businesses that exceed the means of a single individual.

In the case of companies that offer market shares, the money comes without its owner. This is a generalized evil. We have already explained (in the October 1942 issue of the Vers Demain Journal) how this problem could gradually be solved by introducing corporate ownership of big industry. The members of an industry would gradually become its owners, without causing financial harm to its present owners. But this would first require a Social Credit system.

The growth of money

Going back to the opening qestion: Should money claim interest? We are therefore inclined to answer: Money can claim dividends if physical profits were obtained. Otherwise, the answer is no.

If contracts are drafted in a different way, if farmers must pay back interest, even though the crop has failed that year; if the farmers of Western Canada must honor loans at 7% interest when the Financiers who lead the world cause prices to fall to one-third of what they were, this changes nothing to the principle. It simply proves that trickery was substituted to reality.

But if money can claim dividends, when there is an increase in production, there also needs to be an automatic increase of money following this growth in products. Otherwise, the dividend, while being perfectly justified, cannot be distributed without doing prejudice to the public from whom it is extracted.

In our earlier example, the lender is entitled to a share of the goods I produced since I have increased my production thanks to the $5,000 he provided. This can readily be achieved by my giving him a share of the new products. But if it is money that he wishes to receive, it is quite a different matter. If there is no increase of money in the hands of the public, my increased production creates a problem: more goods are being offered, but there is no increase of money in front of them. I might succeed by displacing another retailer, but he will in turn become the victim.

It could be said that the $5,000 must have contributed to increasing the amount of money in circulation. Yes, but I must retrieve from circulation the $5,000 plus what I call a dividend, what others call interest.

Thus, the problem is not settled. And in our economic system, it cannot be. For money to increase, it is necessary that the bank—the only place where the increase might be created—should lend money elsewhere. But in lending it, the bank exacts a repayment that is also greater. The problem snowballs.

A Social Credit system would settle this matter and many other matters.

The dividend is a legitimate, a normal and logical thing. But the present system does not allow its being distributed without hurting someone down the road.

This is undoubtedly the reason why so many people condemn dividends. Note that the Communists and the Socialists oppose dividends, but never speak out against interest. It has never crossed their minds to denounce the source of evil: the creation of money by private institutions, and the lending of this money, at interest, from the moment it is issued.

Yet, this is an untold horror: Life in an organized society, together with man’s work and the progress of science cause wealth to be created; but bankers are the ones who create money based on this wealth, and declare themselves to be the owners of this money. They will not issue money unless it is done through an interest bearing loan.

The other horror is that of governments that resort to loans to finance public works. How can a government be called sovereign if it does not have the right to create money as needed, where needed and when it is needed, or to create more money when production increases.

And to this horror, our Federal Government, through its Victory Bonds, adds immorality, by promising interest on capital that does not produce so much as a blade of grass.

Put one billion dollars into cannons, bombs, and such things; then, run after the fruits born by this production so as to distribute them in dividends to the investors. It is shattered brains, scattered entrails, mutilated bodies, ruins, tears, blood, hatred that should logically be offered as interest to those who subscribe to the Victory Bonds, since these are the true fruits of their investment.

As regards the repayment of the capital, a government that does not acknowledge that it has the right to create money, ought to have the honesty to tell those who buy these bonds: Give us your money, it will be returned to you as wages for your work in the war industry; then, I will take it back from you, bit by bit, to repay to you the money that you invested in these bonds.

This article was first published in the March 15, 1945 issue of the Vers Demain Journal. 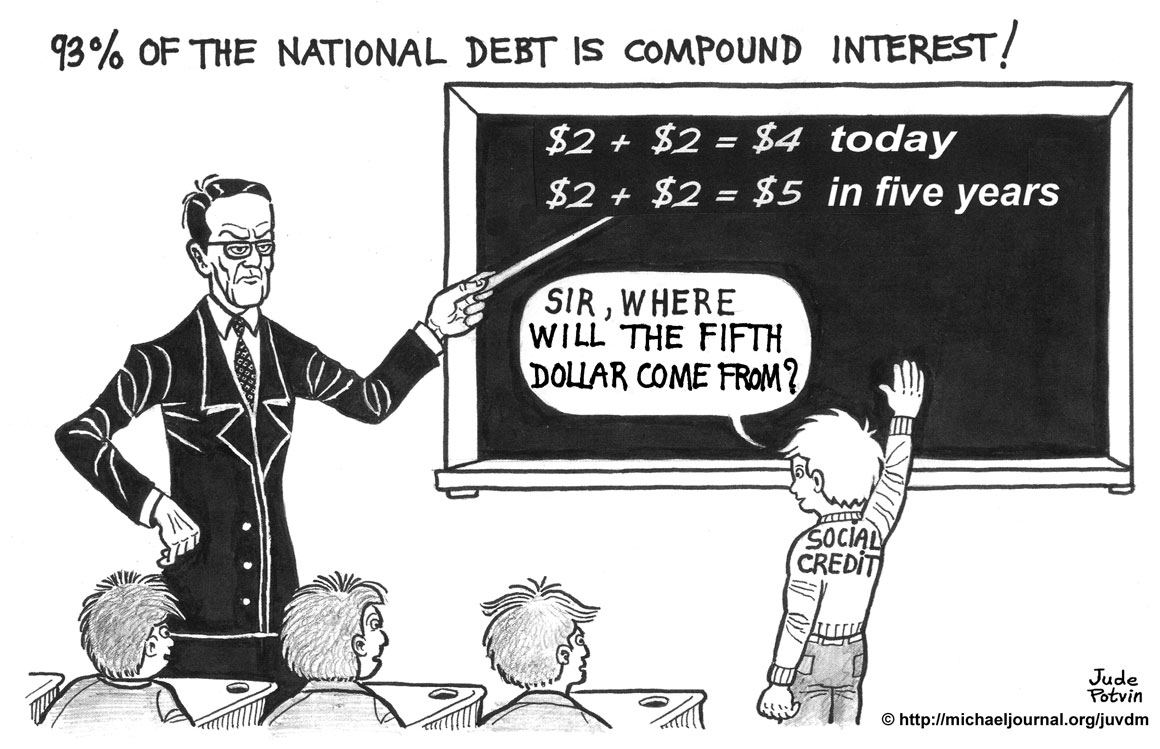