How to finance public works in a Social Credit system

Written by Alain Pilote on Sunday, 01 May 2011. Posted in Social Credit

A bridge built without taxes

Nobody likes to pay taxes but most of the people think that taxes are necessary. Yet, if the financial system were in conformity with reality, most taxes would have no reason to exist. Clifford Hugh Douglas, the founder of the Social Credit school, wrote in Warning Democracy:

“It is well understood that taxation in its present form is an unnecessary, inefficient and vexatious method of attaining the ends for which it is ostensibly designed. But while this is so, there is, of course, a sense in which, while private enterprise and public services exist side by side, taxation is inevitable. Public services require a provision both of goods and human service, and the mechanism by which these are transferred from private enterprise to the public service must in its essence be by a form of taxation.”

In his booklet called A sound and efficient financial system, Louis Even explains this point:

“When the government has, let us say, a road built, or a piece of road, does this hinder or reduce in the least the production of milk, butter, vegetables, clothing, shoes or other consumer goods? Is not this production, on the contrary, activated because the wages distributed to the workers on the road stimulate the sale of these consumer goods?

“Now, in the present system, the government imposes taxes on the taxpayers to pay the workers on the road. It takes away money which would buy the consumer goods, to pay for the construction of the road.

“This system is not in keeping with reality. If the country is capable of producing at the same time both private and public goods, the financial system must supply the money to pay for both. There is no reason to reduce the private sector's standard of living for the public sector's standard of living, when the country's production can feed both.

“Under a Social Credit financial system, money would come automatically to finance all the production that is physically possible and requested by the population, whether it is private or public.”

Since new money belongs to society, simple justice requires it to be issued by society, not by private banks. This is precisely what is proposed by the "Social Credit" system — a set of financial proposals expressed for the first time in 1918 by Scottish engineer Clifford Hugh Douglas: instead of having money created by the banks, a banking credit, one would have money created by society, a social credit.

It is good at this point to remind our readers, especially the new ones, that whenever the words "social credit" are mentioned in this paper, we do not speak about the political parties that may be labelled under this name but about C.H. Douglas' financial proposals, which could be applied by any political party in office.

How would this "social money" be issued? The government would appoint a commission of accountants, an independent organism called the "National Credit Office," which would be charged with setting up accurate bookkeeping, where money would be nothing but the exact financial reflection of economic realities: money would be issued as new goods are made, and be withdrawn from circulation as these goods are consumed. Thus there would be a constant balance between the capacity to produce and the capacity to pay, between prices and purchasing power.

This method of issuing money therefore involves no government control whatever: money would not be issued according to the whims of the accountants or the men in office, but according to the statistics of production and consumption, according to what the Canadians produce and consume.

Moreover, because wages are not sufficient to purchase all of existing production, the National Credit Office would give each citizen a monthly dividend, a sum of money, to fill the gap in the purchasing power, and to ensure each person, a share in the goods of the country. This dividend would be based on the two biggest factors to modern production: the inheritance of natural resources and the inventions of past generations. Both are free gifts from God and therefore belong to all. Those who would be employed in production would still receive a salary but everyone, employed as well as unemployed, would receive a dividend. In Canada, this dividend could be at least $1,000 per month per person. 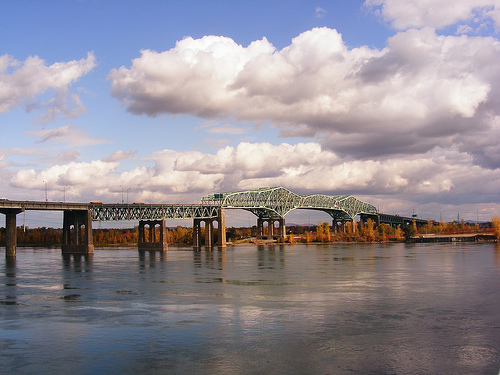 And how would services and public works be financed in such a social money system? Whenever the population would want a new public project, the government would not ask: "Do we have the money?" but: "Do we have the materials and the workers to realize it?" If they are available, the National Credit Office would automatically create the required money to finance this new production.

Let us suppose the population wants a new bridge, that costs $500 million to build. The National Credit Office then creates $500 million to finance the construction of this bridge. And since all new money must be withdrawn from circulation as the new production is consumed, then the money created to build the bridge must be withdrawn from circulation as this bridge is consumed.

How can a bridge be "consumed"? Through wear and depreciation. Let us suppose the engineers who built this bridge expect it to last 50 years. This bridge will therefore lose one fiftieth of its value every year: since it costs $500 million to build, it will depreciate by $10 million every year. It is therefore $10 million that will have to be withdrawn from circulation every year, during 50 years.

Will this withdrawal of money be done through taxation? No, this is not necessary at all, says Douglas, there is another way, which is much simpler, to withdraw money from circulation — the method of the adjusted price (also called the compensated discount). Douglas said in London on January 19, 1938:

"The immense, complex, irritating and time-wasting taxation system, which keeps hundreds of people busily working, is a complete waste of time. The results which are supposed to be achieved by the system of taxation could be achieved without any book-keeping at all; they could be achieved entirely through the price system."

How would this adjusted price work? The National Credit Office would be charged with keeping an accurate accounting of the nation's assets and liabilities, which requires only two columns: one to write down all that has been produced in the country during the given period (assets), and one for all that has been consumed (liabilities). So, in the example mentioned above, the bridge's $10 million annual depreciation would simply be written down in the "consumption" column and added to all the other kinds of consumption or disappearance of wealth in the country during the given year.

How to calculate the national accounts and the adjusted price

Let us consider the first column, the assets:

A country becomes richer in goods when it develops its means of production: its machines, factories, means of transportation, etc. These are called capital goods.

A country is richer in products when it produces items for consumption: wheat, meat, furniture, clothing, etc. These are called consumer goods.

All these factors will thus be inscribed in the first column, the assets of the nation.

Accordingly, the opposite column, the liabilities, will represent the opposite situation, the reduction of wealth in the nation:

A country’s goods are reduced when there is destruction or wear of the means of production: burnt factories, worn-out machines, etc. This is called depreciation. (This is where the $10 million yearly depreciation of the bridge is inscribed.)

A country’s goods are also reduced when they are consumed. Eaten food, worn-out clothing, etc., are not available any more. This is destruction through consumption.

A country’s goods are reduced again when they leave the country: for example, there will be less apples, butter, bacon, in Canada, if this country sends these products to England. This is called exportation.

Now let us suppose that a year’s return gives:

The real cost of the production that is priced at $1,200 billion is therefore $900 billion. The population must therefore be able to reap the fruit of its labour — the $1,200-billion production — by paying only $900 billion for it. Besides, we have seen before that money must be withdrawn from circulation as goods are consumed: if $900 worth of goods and services are consumed in the country during a year, it is $900 billion that must be withdrawn from circulation, no more no less.

How can Canadians get $400 billion worth of goods and services while paying only $300 billion ? This is quite simple, the retail price of all goods and services only has to be reduced by 1/4 — a 25% discount: the National Credit Office therefore decrees a 25% discount on all retail prices during the following term. For example, if an article is priced at $400, I will pay only $300 for it.

But if the retailer wants to stay in business, he must recover $400 for the sale of that product, for the price of $400 includes all the costs of the retailer, including his profit. That is why Douglas speaks about a "compensated discount": in the example mentioned above, the retailer will be compensated by the National Credit Office, which will pay him the $100 that was discounted.

For each of his sales, the retailer will only have to present his sale vouchers to the National Credit Office, which will reimburse the discount granted to the consumer to him. Thus, nobody is penalized: the consumers obtain the goods which, otherwise, would have remained unsold and the retailers recover all their costs.

So, with a "social credit" (or social money) system, as proposed by C.H. Douglas, the government could finance public works and supply services to the population without having to bother them with any form of taxation. All those who think that taxes are too high should therefore hasten to study and make such a "social credit" system known.