Written by Louis Even on Thursday, 01 May 2014. Posted in Social Credit

The origins of the Movement founded by Louis Even

It is Louis Even who wrote the following article, in 1964. He did not sign it, and he speaks of himself in the third person.  It is in the last months of 1934 that Louis Even read for the first time a book on Social Credit.  Mr. Even was then working at Garden City Press, printing shops of the Industrial and Educational Publishing Company, at Ste-Anne de Bellevue, near Montreal. The president of the company, J. J. Harpell, was more than a businessman: he wanted to promote the intellectual development, the general knowledge, of his employees. To this end, he had established the Study Circle of Gardenvale (by the name of the post office located in the same printing shop). Each week, during the winter months, the 120 or so employees of the establishment met together every Friday night in the hall of the City Hall for a lesson of which Louis Even was the teacher.

From electricity to money

For the lessons of the 1934-35 winter, the topic studied was electricity: what everyone should know in matters of electricity. A proper book written by Dr. W. L. Goodwin and translated by Louis Even had been printed the preceeding summer especially for this winter course.

Besides, Mr. Harpell had already been set on the track by the honorable Fielding, minister of Finances of the liberal government in Ottawa. Until his entry to the ministry, Mr. Fielding had been editor of the Journal of Commerce, printed at Garden City Press. Relations between Mr. Harpell and Mr. Fielding were close. And one day, Mr. Fielding, then minister of Finances, had told Mr. Harpell: “If you want to know where the financial power resides in Canada, look towards the banks and the insurance companies.”

It was therefore decided, right from that winter of 1934-35, that the course of the following winter would bear on the study of money and credit. And everyone set out to find a book on that topic, an existing book or manuscript that would be printed at Garden City Press.

The call for a book was launched in The Instructor, organ of the circle published during the winter months. Answers came: books, pamphlets, a few manuscripts. Upon reception, Mr. Harpell looked them over, and passed them on to Mr. Even to have his opinion. 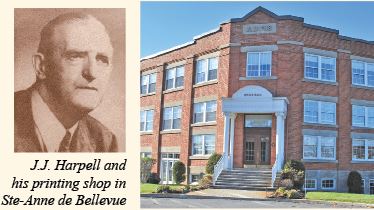 Among the works thus received there was, for example, a large manuscript of Gerald Grattan McGeer, mayor of Vancouver and federal deputy for Vancouver-Burrard (since the senator), who wanted to remedy the Depression that then raged by an abundance of public works that the government would finance by creations of money. The theory may have been generous, but surely a bit wild, and it placed too much importance on the State enterprises. Nevertheless, the work of G. G. McGeer was printed by Garden City Press for the author himself who entitled it The Conquest of Poverty.

There was also another manuscript, less voluminous, by Mrs. A. I. Caldwell of Bristol, New Brunswick. This lady was the sister of the great fish exporter of St. John, N.B., Mr. McLean (made senator since), a man well informed on the present monetary system. It is the manuscript of Mrs. Caldwell, entitled Money – What is it?, that was chosen as the manual for the next winter course of the Study Circle of Gardenvale. It was translated into French by Louis Even.

A book was received also, written by Sylvio Gesell, whose theory has made a good number of disciples in many countries. Gesell recommended a taxed money to promote its circulation: the bearer of a bill (paper money) would have to stick to the back of it, on the 1st and 15th of each month, a stamp equal to 2 per cent of the value of the bill. These stamps, of course, would have to be bought, and no one would accept a ticket that would not be stamped to date. ‘At the end of two years, the bill would be taken out of circulation, since there would be no more place for the stamps, but the sum of these stamps’ would have given the government the price of the bill: the new bill was thus pre-paid. Louis Even did not like this theory too much: it would force the individual to spend his money rapidly, so as not to see his money melt gradually between his hands. It is contrary to the freedom of choice of the individual.

One day, the mail brought a simple pamphlet of 96 pages entitled From Debt to Prosperity by J. Crate Larkin, of Buffalo. It was a summary of the monetary doctrine of Douglas. Louis Even began reading it on the train he took daily between Montreal and Ste-Anne de Bellevue. He was immediately conquered.

He recognized there a group of principles which, once applied, would make a “perfect” monetary system: a system of finance flexible enough to answer to all the situations of economics, bending itself to the economical facts instead of dictating to them or contradicting them, respecting absolutely the freedom of choice of the individuals, serving faithfully the production and consumption, answering to the demands of the social sector as well as to those of economics.

And immediately, also, Louis Even thought to himself: “Everyone must be made aware of this!” From then on all his thoughts would go to the means for realizing this wish.

Two more books, more developed than Larkin’s pamphlet, were also received about Social Credit: Social Credit for Canada by W. A. Tutte, and Economic Nationalism by Maurice Colbourne. Afterwards Louis Even acquired other works by Douglas himself and others on the same topic. All in English.

At the request of Louis Even, Mr. Harpell had a French translation printed of Larkin’s pamphlet From Debt to Prosperity. It was a beginning of French literature printed about Social Credit. Louis Even had made the translation from English.

In 1959, our Movement held a congress in Allardville, New Brunswick, Canada. On that occasion, Mr. Even explained how he came across Social Credit:

“As far as I am concerned, every day of my life (and I am sure it will be the same for me on the other side of the veil as well) I will be blessing the Good Lord for putting Social Credit upon my path in this life. I will always remember that fateful day in 1934 when I was riding on the train that was taking me from Montreal to my job in Sainte Anne de Bellevue. I was privileged to read a 96-page pamphlet that explained Social Credit to me (J. Crate Larkin’s booklet, From Debt to Prosperity.) I was not looking for Social Credit on that particular day. However, I was looking for something that would put an end to the stupid financial crisis with which we were all struggling during that time.

“I had read many things that day besides having worked at my regular job. I was a professor for the workers of our printing house, of which there were more than 100 workers. Every week we held a study-session with the workers. We had chosen for that particular day a session on the question of money and credit. Therefore, we were looking for documentaries on the subject. I had read many manuscripts, a few small pamphlets and different books that had been sent to us. In all of these documentaries, I found that efforts were made to improve the situation. But there were things that were ridiculous; there were problems in all of them. They were saying that one could come to the help of the people but not without requiring something. Not without the condition that programs were put together, or that a dictatorship was installed, or that socialism was established in order to come to the help of the people.

“When I came upon Social Credit, I said: ‘This is fantastic!’ It hit me straight between the eyes like a thunderbolt, and I made up my mind immediately that I had just discovered a “truth” on my path. The other books all had shadows in their overall portrayal of the problems with the financial system at that particular time. There were no grey areas in Social Credit’s overall picture of the exact problem with the financial system. A very great truth had fallen onto my path.

“After reading a few pages on Social Credit, even before I completed the entire book, when I saw what Social Credit was all about, I said to myself: ‘This is so wonderful that all people have to come to know what Social Credit is. It came upon my path; it has to be put onto the path of all people.’ It is Providence who put Social Credit onto my path, and even though I was not very wealthy at that particular time in my life and I did not know how to go about making this great truth known to everyone, I had the desire to do so. I was practically vowing that I would start to make this great truth known to everyone as soon as possible. I kept working at my regular job, and I could only give time to the cause of Social Credit on weekends. Then one day, thanks to the initiative and support of Mrs. Gilberte Cote-Mercier, I was able to leave my regular job at the printing house (Sept. 4, 1938) , and become a Full-time Pilgrim for the great Social Credit cause.”

During the winter of 1935-36, all the employees at Garden City Press were made aware of Douglas’ doctrine during the weekly courses on money and credit.