Give The People Money

Sir Walter Murdock KCMG, 1874-1970, was the founding Professor of English and later Chancellor of the University of Western Australia. A very popular academic, he was an essayist famous for his intelligence, wit and humanity. In 1970, just prior to his death, Western Australian’s second university “Murdock University” was named after him.

I have often heard people say that this Major Douglas scheme, in which I believe, is quite impracticable because it is so complicated that no one can understand it. It isn’t so bad as that, but it is complicated, and it must be complicated for a very plain reason: that the present money system, which it seeks to modify, is complicated. If you think the present system, under which you and I live, is easily understood, depend upon it, you don’t understand it...

Circumstances have forced people to do a lot of thinking in the last few years, and the result of this reflection is that certain statements which would have been violently disagreed with a few short years ago may now be taken for granted in any discussion.

One of these is that the world is suffering from an unexampled depression, in the midst of unexampled wealth. The world’s inhabitants are in the position of persons dying of thirst on a raft in the middle of a fresh-water lake. I don’t need to insist on that, at this time of day; there are few persons who will not agree that the age of scarcity is over, and that we live in an age of plenty. The problem which has puzzled the world from immemorial ages — the problem of how to produce enough food and other necessities of existence for the needs of the world’s population — has been solved once for all...

An invention which enables a machine to do the work of men obviously throws men out of work; so that what the scientists and inventors thought to be a blessing they were conferring upon mankind turns out to be a heavy curse. You would say off-hand, wouldn’t you, that it would be an entirely blessed thing if we could have machines to do all the dirty work necessary, all the beastly drudgery, and set men free for better and pleasanter activities?

Not at all; the machinery that does the dirty work for us throws men out of any sort of work and produces an unprecedented volume of misery...

Before I come to the remedies proposed by Major Douglas, I must mention one more paradox. That is the paradox of the so-called financial experts. These experts, who have learned the economics of an age of scarcity and have apparently learned nothing since, have only one piece of expert advice to give us: Economise!

To the persons dying of thirst on a raft in a freshwater lake their sage counsel is — Drink less! To people living in a world wealthier than ever before they say: “You must lower your standard of living.” Here in Australia, they put their hands together and devise a plan for restoring prosperity by cutting down wages and diminishing the buying power of the people, when any spark of common sense should tell us that to lessen people’s power of buying could only result in an increase of unemployment and a deepening of the depression.

The result of the combined wisdom of the economists is that the world keeps getting more inextricably into the mire; and that is why I, for one, am not profoundly impressed when authorities tell me not to meddle in these matters that are too high for me, but to leave everything to the experts.

The key to the situation lies in an answer to the question: What is money? What is this mysterious entity which people haven’t enough of, so that they can’t afford to get any good of the fact that they are living in an age of plenty?

Money simply means tickets for the exchange of goods. Whether printed on metal or on paper, money means tickets. Money is not a commodity, but a means of exchanging commodities, a very ancient device for doing away with the intolerable cumberousness of barter. 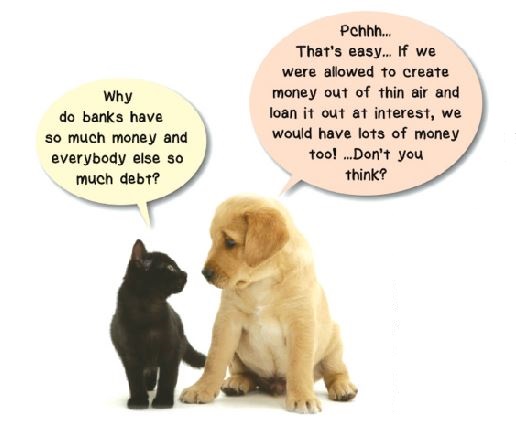 The world is not suffering from a lack of goods today, but from a lack of tickets for the exchange of goods... Instead of creating the right amount of money to carry on all the business possible in the world, we limit the business to make it fit the amount of money there is. We close factories, we limit production, we throw men out of work, we starve people, simply and solely for lack of money; and yet money is a thing we can create in precisely whatever quantities we choose.

Who does, in actual fact, create money? In old times it was created by governments, and by governments only; and any private person who tried to encroach on this prerogative of the king by making counterfeit coins or bank notes could be put in prison or, even in England not so very long ago, hanged.

With the invention of the cheque system — an admirable device in many ways — the power of creating and cancelling money passed, without the public noticing what was happening, out of the hands of the king into the hands of bankers.

What do banks make money out of? They make it out of nothing, as all the leading authorities on banking are agreed. They create it with a pen, when and to what extent they please; and they destroy it when they please. Every time a bank grants a loan, it creates money; every time it calls in a loan, it destroys money. The banks, controlling the volume and the flow of money, control the lives and destinies of men; and governments eat out of their hands.

Having re-assumed control of the monetary system, the first task of government will be to deal with the present shortage of money, to bridge the gap between production and consumption. One of the great services of Major Douglas was his discovery that, with our present financial arrangement, no industry can possibly pay out, in wages, salaries and dividends, enough money to pay the cost of the goods it produces, and that is true of all industries.

This is the famous A + B Theorem, of which the orthodox economists are so fond of exposing the fallacy; but the facts, as someone has noticed, continue to behave as if they were in the pay of Major Douglas.

Major Douglas proposes to finance the consumer, to bridge the disparity between production and the power of buying products, in two ways. First, by treating every man, woman and child as a shareholder in the national business and issuing to each a National Dividend, calculated on the real value of the nation’s assets. Second, by enabling all goods to be sold below cost price, the loss being made good by issues of national money.

The problem is how to create more money without causing a drop in the value of money; and the answer is that money must be created in exact proportion to the real wealth in the community and that arrangements must be made not only for its issue, but for its cancellation. If you will take the trouble to look farther into this matter you will find that the Douglas proposals contain in them no threat of inflation or deflation.

When I try to expound the scheme to friends, they say: “I can’t see the fallacy in your argument; but it’s too good to be true. If what you say is true, then the empire of poverty is over at last, and within a few months the world will be entering on an era of universal plenty; no, we have heard of these utopian dreams before; it’s far too good to be true.”

Now my reply to that is this: If, a century ago, someone had announced that within 100 years the immemorial problem of production would be solved, and that man would possess the knowledge and the machinery to produce in abundance all the material goods he could need, most people would have laughed the prophet to scorn, and said : “It’s too good to be true!” But it is true; everyone agrees that it is true.

And if someone else had prophesied, fifty years ago, that in fifty years the earth was going to be a planet on which misery and destitution would stalk abroad amid an unprecedented plenty of material goods, people would have said : “No, impossible; it’s too bad to be true.” But it is true; that evil dream has come true, as we all know if we keep our eyes open.

I regard it as the bounden duty of everybody to do what in him lies to awaken the world from this nightmare; and that is why I commend to your close attention the Douglas proposals, which to the best of my belief would result in making money our invaluable servant, instead of, as at present, our despotic master.