Written by Louis Even on Wednesday, 01 January 2014. Posted in Social Credit 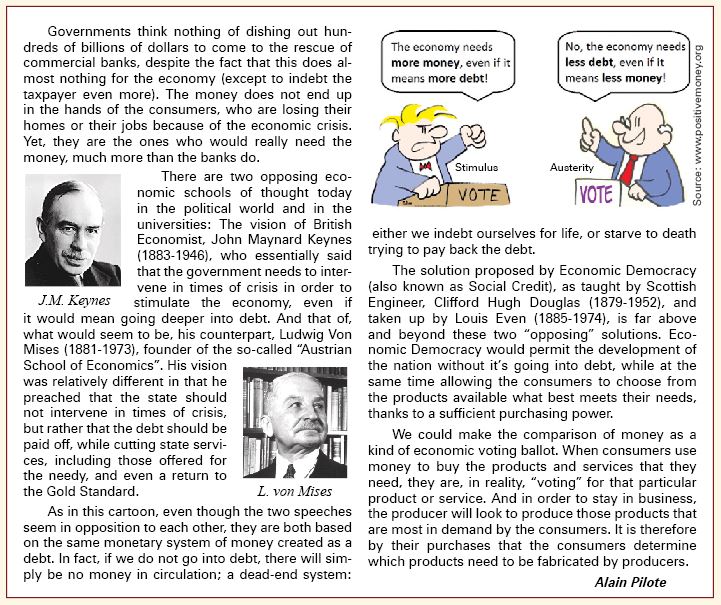 The following article was written by Louis Even in 1936. The numbers and prices mentioned here are from 1936 (e.g. a stove is priced at $48.00), but both the diagnostic and solution proposed still remain valid today. We must not stop halfway and finance only production, we need to also finance consumption. The production is not made in order to be admired in store windows, but rather, to be consumed, in response to the needs of all men. In today’s financial system, what is actually happening is that the financing of production and/or consumption can only come about by incurring perpetual debts.

This article has as its goal to place the consumer in the role that rightfully belongs to him. The consumer is the great forgotten one of the present economy. Yet, is not everyone a consumer? To assert the sovereignty of the consumer is to assert the sovereignty of society as a whole, and not just a few individuals. Social Credit recognizes this sovereignty; is there any better way of professing democracy — economic democracy? To speak of democracy within the present system, where consumers are restrained by the lasso of a clique of financiers is, to say the least, to fool ourselves and others.

Certain enthusiasts of Fascism proclaim the need of a government of strong men, or at least, of one strong man, who rules without consulting those governed. Others offer the Communist ideal; another form of dictatorship nourished by bitter hatreds and accompanied by bloody destruction. Still, others hold to the party system, in which, they say, the people choose their leaders. (Is it really these leaders who govern?)

Under all these forms of rule in our world today there remains an actual dictatorship, one which controls the destinies of nations because it controls the money. It is of no consequence to this dictatorship which type of government is in place. The international bankers who regulate as they see fit the credit of the nation, care little about “who makes the laws” of the nation. They remain indifferent to any reforms advocated. To them it does not matter, as long as the administration of credit is left to them. And even more curious is the fact that, in general, even our best sociologists will carefully examine everything else, but will not touch upon this tender spot. But it is precisely around this strategic point that there stands a shrewd sentinel. As powerful as he is silent, he keeps watch and does extremely well in finding scapegoats.

Production is no longer a problem today. Steam, electricity, oil, chemistry, automation,… these are all at the service of man. He should be living like a king, yet poverty reigns everywhere. With mountains of products waiting to be purchased, and so many needs still unsatisfied, products still continue to accumulate, and the needs become still more desperate.

Production exists in order to be consumed; consumption is the end, the reason, for the existence of production. Why then is production, which is presently operated at one-third lower than its full capacity, not regulated according to the needs of the consumer, rather than according to the amount of money allowed to circulate by irresponsible controllers? Instead of the potential for consumption regulating the production, it is the potential for money that regulates production. And this potential has its dependency upon a group of tyrants whose one goal is to keep that money scarce.

Production in itself is not real wealth. It is the need for consumption that gives production its true value.

We can mechanize the industries in order to multiply the production, but if these products do not reach the consumer, then there is no real improvement in the level of material comfort. As long as the products remain in the warehouses and in the stores, they will do nothing to add to the well-being and comfort of families or individuals. Progress is not measured by the level of production, but by the level of consumption. Therefore, it is in the area of consumption that progress should be measured. Consumption presupposes production; you cannot have the former without the latter, but it is possible to have the latter without the former. Production without consumption becomes a burden; a liability. A store filled with products that do not sell must liquidate. The producer whose goods are not in demand must cease producing. It is the consumer who animates the industry. Why then is he the one that is sacrificed?

Instead of financing production, would it not be better to think in terms of financing consumption? The consumer in turn would finance the producer by his purchases.

In today’s system the money-creators issue new money everyday, but this money is mostly for production only. But with products and money both on the same side, how will the products reach the consumer? For the producer, it is no better. For him, this new money created by the banks is a debt to which he is bound to the bankers to repay, both in capital and in interest. And the producer will have to draw this capital and interest from the public, the same consumers whose pockets are already empty! Either the producer will despair from not being able to sell his products, or the consumer from not being able to buy them and possibly both.

Faced with this ridiculous situation, those who govern (but who are not really governing at all!) grovel at the feet of these bankers. They beg them for crumbs to hand out as a dole to the sons and daughters of the nation. The bankers, in return, grant just enough so as to prevent any revolt from the people, while at the same time creating for them new bonds (or chains) to enslave them. Humanity may suffer and perish — but the system, the control of money by men who have neither hearts nor feelings, but who are considered as gods, must be preserved. Has there ever been a more exacting form of idolatry?

This diabolical game is played out in America, Europe, and every civilized country in the world. “There are in the world thirty million unemployed receiving assistance, and some thirty million without assistance. Counting their dependents, this adds up to 250,000,000 living persons who are undernourished”. (From, “Vu”, May 30, 1936.)

The journal here quoted also adds, that each year, according to the official statistics of fifty civilized countries, 2,400,000 persons die of hunger and 1,200,000 others commit suicide for reasons which are directly linked to lack of food.

It would be so simple for mankind to thrive if we would only distribute the daily bread which is so abundantly furnished to us by our Heavenly Father. It is to Him that we are indebted for all the natural wealth, as well as for the arms and brains capable of transforming this natural wealth and making it available to send out to the four corners of the earth!