Every citizen should get a dividend

Written by Louis Even on Thursday, 01 October 2015. Posted in Dividends

Who owns the national credit?

Here are the main sources of the real credit, of the production capacity of any national community.

First, there are the natural resources of the country — land, forests, rivers, minerals etc. —without which nothing could be produced. Who owns these natural resources? Who put them there? They are obviously free gifts from the Creator to all men, who are the stewards of these resources.

Second, a part of the real credit is the skills and efforts of the people who exploit these resources, who transform raw material into finished goods, to produce goods that answer the private and public needs of the population.

Third, there are also the inventions, the improved production processes, the ever-increasing contribution of various forms of energy that increase the productive capacity of the nation, while reducing the need for human energy in the activities related to the production, transport, and distribution of goods. All these items can be classified under the name “progress”. This “progress” is passed on from one generation to the next, making the current generation the heir of the previous ones.

Here therefore, is what the production capacity of a country is based on: the free resources given by the Creator, the efforts and know-how of the population, and the heritage from past generations.

In this article we will be talking about the financing of distribution of this productivity, specifically about the periodical national dividend to every member of the national community, to all and each. Pius XI wrote, in the Encyclical Letter Quadragesimo Anno:

“For then only will the economic and social organism be soundly established and attain its end, when it secures for ALL and EACH those goods which the wealth and resources of nature, technical achievement, and the social organization of economic affairs can give.

“These goods must be sufficient to supply all needs and an honest livelihood, and to uplift men to that higher level of prosperity and culture which, provided it be used with prudence, is not only no hindrance but is of singular help to virtue.”

“All and each” means all and each without exception. Ten years after this Encyclical of Pius XI, his successor, Pope Pius XII, in his June 1, 1941 radio address, also stressed the aim of any national economy, namely, the satisfaction of the basic needs of every individual:

“Material goods have been created by God to meet the needs of all men, and must be at the disposal of all of them, as justice and charity require.”

“All men” means all men. And the Pope points out that it is an individual right that cannot be conditioned by any financial system. This right is not given by the government or any system; it is a birthright, a fundamental right tied to every human being as long as he is alive. Lawmakers must recognize this right, and facilitate its realization. Here are the exact words of the Pope:

“Every man indeed, as a reasonable being, has, from nature, the fundamental right to make use of the material goods of the earth, though it is reserved to human will and the juridical forms of the peoples to regulate, with more detail, the practical realization of that right.”

The “juridical forms of the peoples” are the laws. These laws must see to it that this individual right is attained. The Pope added: “Such an individual right cannot, by any means, be suppressed, even by the exercise of other unquestionable and recognized rights over natural goods.”

“The national economy, which is the fruit of the activities of men combining their work in the national community, tends to do nothing but to ensure, without interruption, the material conditions in which the individual life of the citizens will be able to develop fully.”

Note: not a nationalized or State-controlled economy, but a “national economy”, the one that results from the various activities of the people who live in the same country, ruled by the same laws. This economy doesn’t have to hire every individual in production, but it must distribute the fruits of production to every citizen; whether he is, or is not hired in production. If the national economy does that, concluded the Pope, the nation will be prosperous, even with less total production than another country that will produce more, but where some of its citizens remain deprived as with reckless laissez-faire financial capitalism or with State Socialism.

Taxing the haves to give to the have-nots?

No country has yet maintained these objectives of a sound national economy. In many countries, the physical means to produce are very developed, in many countries even over-developed, but in all countries there is a system that still badly finances the distribution of goods.

The best-intentioned governments claim that every citizen should benefit from the production of his country; they even try to manage this through some social security measures, but it always continues submitting to the established financial rules; reckless individualistic profit-seeking or State coerced socialism. Other countries, former colonies, have their autonomous production potential limited by financial restrictions.

The way for consumers to obtain products or services is to pay for them with money, with purchasing power. Usually, money can be obtained, first of all, by being hired in production — wages to the employees, or profits to the employers or to those who supplied the capital. This means only a certain part of the population can get money. Yet, all of the population of a country must get some money to live. To that end, the governments taxes those who have money, to give some to those who don’t have any.

This redistribution of money requites a vast system of inquiries, massive records and bureaucratic controls, causing discontent and frustration among taxpayers, while humiliating those who receive welfare aid. This does not begin to describe the delays and all those who are forgotten in all of this red tape.

Why is this? Because the rule of the present financial system is that the claims on production must be earned, or in other words, that all the purchasing power available must first be distributed among those who supply work and capital, as if production was the fruit of these two factors only.

There is a huge flaw in this statement, as we examined at the top of this article which we now review. Production depends not only on capital and human labor, but also on natural resources, which are a free gift from God to meet the needs of all men, and which must be at the disposal of all, as Pope Pius XII said. Without air, water, earth and raw materials, all the money invested and all the efforts of workers will produce absolutely nothing.

To say that every human being, from birth, is entitled to some claims on production, is not socialism, nor a condemnation of private ownership of the means of production; it simply acknowledges that this production also has a social function to carry out, in the name of simple justice.

Another great factor in today’s production is the progress realized in the techniques of production, which is the fruit of the inventions, discoveries, knowhow, passed on and accumulated from generation to generation. This progress is a common inheritance, and no one can claim to be the sole heir. This common inheritance (called by Douglas “cultural inheritance”) is a much larger factor in production than the current efforts of workers. It is inherited from past generations, and all must benefit from it.

You people all know about money or capital invested in a business: he who invests his money asks for a share in the profits of this business, and this share is called a dividend. Nobody will question the right of the investor to a dividend, even though this investor did not himself work in this business. If he does supply human labor, he will also get a salary, on top of his dividends.

The same reasoning should apply to every citizen: all must receive a periodical dividend based on their inheritance (progress and natural resources), and those who are employed must on top of their pay for their work receive a dividend.

Progress-capital can rightly be called real capital. This factor of production is much more effective than the money-capital- which, by itself, can produce nothing, since it is nothing but figures written on pieces of paper or coins—a permit to produce, a claim on products.

If those who have invested money in a business are entitled to an industrial dividend, those who are the co-heirs of natural resources and progress are all the more so entitled to a national dividend, especially when one considers that in many cases, the way money was accumulated for these investments is highly questionable. For example, some businesses will increase their capital by selling their products with profits that are large enough to assign part of them to finance the future development of these businesses. This is called “self-financing”. But, in reality, is this not a capital supplied by the consumers who buy the products? And yet, these consumers get no dividends from these businesses!

The increment of association

One of the positive moral effects of the application of the Social Credit proposals will be to have private property automatically accomplish its social function (solidarity and the common good), without any harm to the private owner, and to the benefit of every member of the national community.

This is because, at the very basis of Social Credit, there is the principle, highly proclaimed by Douglas, that every member of an association must benefit from the advantages resulting from this association. The members of a group do not exist for the group; it is the group that exists for them. So each one of the members of this group must individually benefit from the enrichment due to this association (increment of association). Douglas rightly applies this principle to the whole national community, which is in keeping with the teachings of all the recent Popes.

In a Social Credit economy, the purchasing power for new production coming for sale in the market will therefore come from two sources: from wages to those who are employed, and from dividends distributed to all. As progress, automation, computerization, even the use of robots increases, and the need for human labor therefore decreases, the percentage of the total purchasing dollars from these dividends should increase.

In industrialized countries, this part of production due to progress is quite considerable, and the national dividend to all in these countries should therefore be sufficient to guarantee at least the basic necessities of life, and gradually, within a short period of time, aspiring to the words of Pope Pius XI, “be sufficient to supply all needs and an honest livelihood, and to uplift men to that higher level of prosperity and culture which, provided it be used with prudence, is not only be no hindrance, but is of singular help to virtue.” (Encyclical Letter Quadragesimo Anno.)

With a dividend to all, one will no longer talk about welfare recipients, or people who live at the expense of others, but of shareholders, of true capitalists.This dividend to all is possible, provided the present financial system is corrected. The proper economic order would no longer submit physical realities to the orders of a miniscule financial oligopoly, but rather would finance automatically the constructive activities of free producers answering the needs expressed by consumers with the economic means to choose freely. 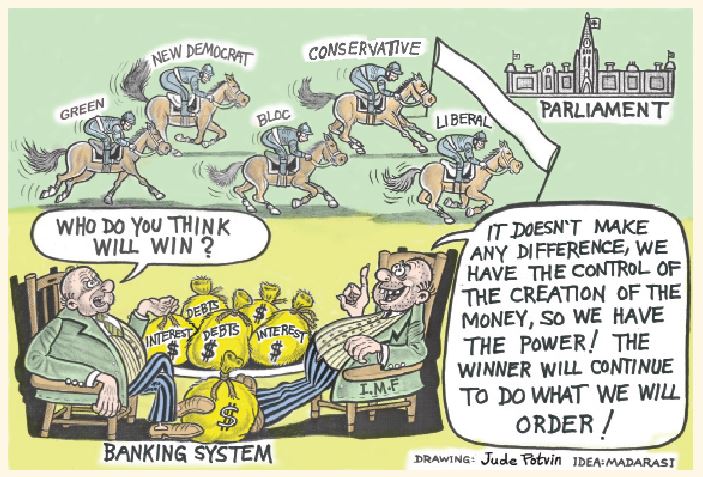