A Basic Income through a Social Dividend

Finland will give $1,200 a month to each citizen

For over 75 years, the Social Crediters of MICHAEL and Vers Demain have supported the idea of a social dividend – an amount of money to be given each month to each citizen, with no conditions attached, i.e. whatever our assets and whether we be employed or not. This would allow every citizen to be recognized as the co-heir of the natural resources and of progress (all the discoveries that have been passed down over the centuries), what the inventor of the Social Credit Principles, the Scottish engineer Clifford Hugh Douglas called the “cultural heritage”.

This idea of a universal basic income (UBI) has made its way into the people’s mind, at times under other names—basic income guarantee (BIG), universal income, guaranteed annual income, etc.—in part because we have to recognize the failings of our present social policies, and because the technological progress eliminates the need to employ workers, thus depriving people of an income. As early as 1930, the economist John Maynard Keynes wrote in a book titled “Economic Possibilities for our Grandchildren”:

“We are being afflicted with a new disease of which some readers may not yet have heard the name, but of which they will hear a great deal in the years to come – namely, technological unemployment. This means unemployment due to our discovery of means of economising the use of labour outrunning the pace at which we can find new uses for labour.”

New technological discoveries that were made since 1930 only serve to confirm the above. “The 4th Industrial Revolution”, the main topic of discussion at the Davos Economic Summit, held in Switzerland in January 2016, will eliminate 5 million jobs in the major world economies: Following the first revolution (the invention of the steam engine), the second (electrical power and assembly lines), the third (electronics and robotics), now comes the fourth that will combine several factors already at work such as the internet, unprecedented processing power, huge storage capacity, mobile devices, etc.

This probably explains why, in the last few months, a lot has been said throughout the world concerning the possibility of establishing a “basic income” that would guarantee all citizens access to basic necessities.

An example of this comes from Finland where Prime Minister Juha Sipilä announced in December of 2015 that beginning in 2017, the Finnish Government will give each citizen a monthly universal allowance of 800 euros (approximately 1200 CAN dollars) to fight poverty. According to Mr. Sipilä, the Finnish Government would even save money by eliminating all existing social programs and by replacing them by a single equivalent payment. This would cut administrative costs by half by decreasing the amount of bureaucracy and the size of the civil service.

In the Netherlands, since January 2016, the City of Utrecht has carried out an experiment involving some 300 individuals where an adult receives 900 euros, and a couple or family is given 1,300 euros a month. In Switzerland, the federal popular initiative (or referendum) for an unconditional basic income for all that was launched on April 11, 2012, has gathered over 126,000 signatures when 100,000 were needed for a referendum, which will be held on June 6, 2016, so that each Swiss citizen might receive an annual income equal to 35,900 CAN dollars.

Towards the end of February 2016, Philippe Couillard, the Premier of Quebec, announced that he was giving François Blais, the present Minister of Social Solidarity, the mandate to study the feasability of such a basic income for Quebec. François Blais is an expert on the subject. While a teacher at Quebec City’s Laval University, he wrote a book titled “A Basic Income for All: An Introduction to the Principles for a Universal Allowance”.

Mr. Blais argues that this non-taxable income, granted from birth until death, would replace today’s social security measures: welfare, allowances for the familiies and for the retirees, income tax credits to individuals and companies, bursaries and loans to students, and more. Easier to manage, this measure would lighten the administrative structure, and would also encourage people to go to work since the allowance would not be lessened, even if its beneficiary should receive a salary (as now happens to welfare recipients when they go back to work).

In its 2016 budget delivered on Feb. 26, the province of Ontario announced a universal basic income pilot project set to unroll this year.

At the party’s 2014 policy convention, the Liberal Party of Canada adopted a resolution to create a basic annual income. Liberal-appointed Senator Art Eggleton recently put forward a motion calling on the federal government to sponsor a pilot project to study the idea.

In 1976, The Alaska Federal Fund was set up, an independent fund the capital of which is based on the State’s mining and oil revenues, that allows the distribution, on the 30th of June of each year, of a universal dividend to each citizen of Alaska. A 1999 referendum (won by an 84% majority) prevents the State from diverting any part of the Fund towards other activities. The largest amount distributed to date was $ 2,072, in 2015. Furthermore, there is no income tax and no sales tax in Alaska.

An experiment was carried out with 1,000 people in Namibia, a South African country. This took place in the Otjivero-Omitara township, some 100 kilometers from Windhoek, the capital city. Every month, during two years beginning on January 1, 2008, each registered citizen was given 100 Namibian dollars.

Within a few months’ time, criminality had gone down, food security had increased, school absenteeism had gone down, and micro-businesses were founded that revitalized the socio-economic fabric of the village. As a whole, the global income of the village’s inhabitants rose by 29%. This was more than the increase in income provided by the program.

In the 1970s, the Canadian town of Dauphin, in Manitoba, conducted an experiment based on a universal minimum income called “Mincome program”. From 1974 to 1979, each citizen was issued an allowance. The purpose was to see whether money distributed directly to citizens could replace social programs. The experiment was brought to an end without there being a report published. Only later, in 2007, did a researcher, Dr. Evelyn Forget, an economist and professor with the department of community health services at the University of Manitoba, undertake the analysis of the results obtained during the experiment. In her report called “The town with no poverty,” published in 2011, Dr. Forget noticed a 15% drop in hospitalizations, as well as a significant decrease in work-related accidents. The researcher also noticed a drop in hospital emergency visits for car accidents and marital abuse.”

How to pay for this income?

As can be seen, the idea is being discussed, but the problem remains: How to pay for this basic income? Social Credit answers: Through a social dividend to be financed by new interest-free money that would be created by a National Credit Office or by the Nation’s Central Bank. No need therefore to tax the wealthy or to tax industry. This recognizes that we are all capitalists, all coheirs of progress and of the country’s natural resources.

Justice consists in giving everyone his due, and what is owed everyone is a social dividend. MiCHAEL has published hundreds of articles on this topic that can also be found on its website. (Alain Pilote’s book “Economic Democracy in Ten Lessons” carries a chapter on the dividend.) Billions of dollars were used to bailout the banks following the 2008 crises. Why not help the citizens directly by giving them money?

The number of those promoting a basic income who realize that this cannot be done without it being accompanied by a monetary reform whereby the State takes back its sovereign prerogative to create the nation’s money, is growing. One can read on the website of the French Movement for a Basic Income:

“Nobel prize winner in Economics for 1988, Maurice Allais, world-known specialist and promoter of a basic income, suggested taking away from the banks the monopoly to create money. His suggestion was not acted upon. As globalization progressed, the power the commercial banks exercised over the creation of credit increased and as well became less and less regulated. From the 1930s on, other economists have described what this inevitably lead to: speculation bubbles, skyrocketting debts, ever-increasing inequalities, unemployment and poverty.

“We will not explain in details the mechanisms whereby money is created by the banks and the harmful consequences that could ensue. Many of the members of the Mouvement Français pour le Revenu de Base are aware of these and will not be misled… For these members, it is illusory to think that a basic income that did not take into consideration the creation of money, could possibly lead to social peace. Furthermore, they believe that a basic income arrived at by redistribution, as might be first implemented, could lead to the exact opposite, if political forces were to use it as a diversion to maintain a social status quo they know to be iniquitous. It is of the greatest importance that we study basic income policies that include money creation, policies that could even be based entirely upon it. “

Let us carry on with the education of the people.  Let us ask for a basic income to be financed tax-free by our country’s Central Bank. 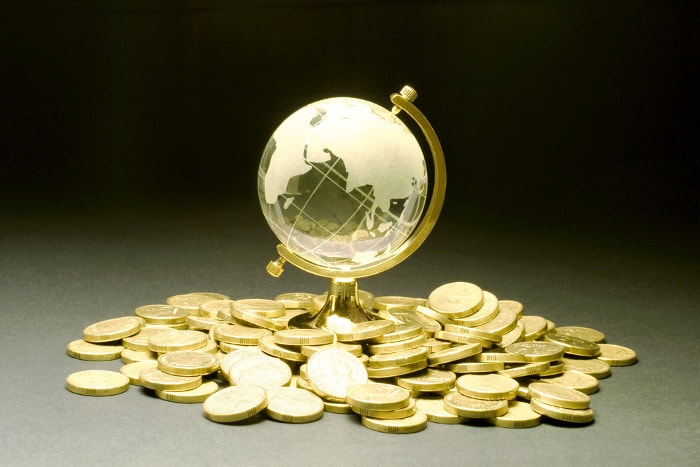