Why Pope John Paul II is a saint 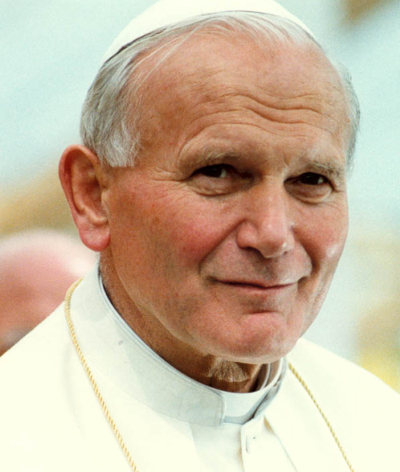 ROME, JAN. 28, 2010 (Zenit.org) Pope John Paul II was the same in public and in private: "transparent, sincere, integral," according to the postulator of his canonization cause. Monsignor Slawomir Oder made this reflection Tuesday when he presented a volume that he has written in collaboration with Saverio Gaeta. It presents more than 100 testimonies related to the Polish Pontiff’s cause for canonization.

"Why He Is a Saint: The True John Paul II Explained by the Postulator of the Cause of Beatification" was presented in Rome with a presentation from the leader of the Vatican’s saint congregation, Cardinal Jose Saraiva Martins.

The details in the book that grabbed international attention are regarding the Holy Father’s practices of mortification, including flagellation and sleeping on the floor.

Cardinal Saraiva Martins, however, highlighted the depth of the Pontiff’s prayer. He confessed how overwhelmed he was by the profundity of the Pope’s recollection when he invited someone to dine and the visit began with a silent prayer in the private chapel.

"He was as though absorbed in God," the cardinal said. "He was a man of God and his intense prayer was a true evangelization."

The prelate also pointed out the Pope’s profound devotion to Mary and mentioned the "joy," the "happiness" that John Paul II felt in the year 2000, after the beatification of the shepherds of Fatima, Francisco and Jacinta Marto, on May 13.

A witness stated that when asked, "Do you see the Virgin?" the Pope answered, "No, but I hear her." Another witness, though, said John Paul II confided that he "saw" her.

The book notes that the Holy Father had a sweet tooth and has other insights into the Pope’s personality: He once answered a religious who expressed her "concern" for "Your Holiness": "I am also concerned about my holiness!"

Monsignor Oder highlighted the Pope’s "humanity" and his ability to perceive in all persons "the imprint of God." And Cardinal Saraiva Martins noted that humanity and holiness are one thing: The more holy one is, the more "human" one is.

Though John Paul II has already been proclaimed venerable – Benedict XVI approved the recognition of his heroic virtues in December – a miracle still needs to be confirmed before his beatification. That means rumors that the beatification is coming in October are still just that: rumors.

Monsignor Oder explained that a case studied by the Vatican was the now well-known cure of Sister Marie Simon-Pierre. The young French nun of the Little Sisters of Catholic Motherhood suffered Parkinson’s disease (as did John Paul II).

Monsignor Oder said this case was chosen due to, among other things, its "simplicity." He further noted how the nun suffered from the same illness as the Pope and, finally, how her cure enabled her to take up her activities again at the service of nascent life, a cause that was dear to John Paul II.

What the book contributes as a novelty are unpublished documents from 114 testimonies related to the canonization cause.

There are documents from the Polish secret service, mentions of the Italian secret service, a letter of resignation in case of incapacity due to illness (in Italian), an open letter to Ali Agca in Polish (never published) and testimonies on his mystical life.

The book notes how the Polish secret service spied on Karol Wojtyla even before his ordination, then as a priest and bishop. In the 60’s, a whole structure was dedicated to his vigilance.

The volume reveals how it was his chauffeur, Jozef Much, who informed Archbishop Wojtyla of the death of John Paul I, which greatly affected him. A strong migraine forced him to cancel an appointment.

Before taking the plane to Rome, his chauffeur expressed the hope that he would return soon. "I don’t know," the next Pope would answer, "in a serious tone with an air of sadness."

Suspicions that the Polish prelate would one day be the Bishop of Rome had surfaced as many as two decades before.

When he was appointed auxiliary bishop of Krakow, his bishop, Eugeniusz Baziak, took him by the arm and led him to some priests in the waiting room, saying: "Habemus Papam" (we have a Pope).

Co-author Saverio Gaeta pointed out that the subtitle of the book ("The True John Paul II Explained by the Postulator of the Cause of Beatification") does not mean that other biographies are not "true," but that the John Paul II described in the book is the one known personally by witnesses.

The book was published in Italian by Rizzoli.