Why a Feast of Christ the King?

“To fight the plague of anti-clericalism,” said Pius XI

To understand the meaning of the Feast of Christ the King, and by extension, why Christ can be recognized as the King of a nation, as it is now the case in Poland, in spite of an epoch marked by pluralism, one must refer to the origins of this feast, which was instituted by Pope Pius XI in his encyclical letter “Quas Primas”, dated December 11, 1925. This feast was originally celebrated on the last Sunday in October (the Sunday before All Saints’ Day). Since the liturgical reform of 1969, Catholics celebrate it on the last Sunday of the liturgical calendar, towards the end of November, under the name of the“Solemnity of Our Lord Jesus Christ, King of the Universe”. Here are large excerpts from this encyclical of Pius XI:

In the first Encyclical Letter which We addressed at the beginning of Our Pontificate to the Bishops of the universal Church (Ubi Arcano, December 23, 1922), We referred to the chief causes of the difficulties under which mankind was laboring. And We remember saying that these manifold evils in the world were due to the fact that the majority of men had thrust Jesus Christ and His holy law out of their lives; that these had no place either in private affairs or in politics: and we said further, that as long as individuals and states refused to submit to the rule of our Savior, there would be no really hopeful prospect of a lasting peace among nations. Men must look for the peace of Christ in the Kingdom of Christ; and that We promised to do as far as lay in Our power. In the Kingdom of Christ, that is, it seemed to Us that peace could not be more effectually restored nor fixed upon a firmer basis than through the restoration of the Empire of Our Lord.

We were led in the meantime to indulge the hope of a brighter future at the sight of a more widespread and keener interest showed in Christ and His Church, the one Source of Salvation, a sign that men who had formerly spurned the rule of our Redeemer and had exiled themselves from His kingdom were preparing, and even hastening, to return to the duty of obedience.

It has long been a common custom to give to Christ the metaphorical title of “King,” because of the high degree of perfection whereby he excels all creatures... But if we ponder this matter more deeply, we cannot but see that the title and the power of King belongs to Christ as man in the strict and proper sense too. For it is only as man that he may be said to have received from the Father “power and glory and a kingdom,” (Daniel 7:13-14) since the Word of God, as consubstantial with the Father, has all things in common with him, and therefore has necessarily supreme and absolute dominion over all things created.

Moreover, Christ himself speaks of his own kingly authority: in his last discourse, speaking of the rewards and punishments that will be the eternal lot of the just and the damned; in his reply to the Roman magistrate, who asked him publicly whether he were a king or not; after his resurrection, when giving to his Apostles the mission of teaching and baptizing all nations, he took the opportunity to call himself king (Matthew 25:31-40), confirming the title publicly (John 18:37), and solemnly proclaimed that all power was given him in heaven and on earth (Matthew 28:18). These words can only be taken to indicate the greatness of his power, the infinite extent of his kingdom.

This kingdom is spiritual and is concerned with spiritual things. That this is so the above quotations from Scripture amply prove, and Christ by his own action confirms it. On many occasions, when the Jews and even the Apostles wrongly supposed that the Messiah would restore the liberties and the kingdom of Israel, he repelled and denied such a suggestion. When the populace thronged around him in admiration and would have acclaimed him King, he shrank from the honor and sought safety in flight. Before the Roman magistrate he declared that his kingdom was not of this world. The gospels present this kingdom as one which men prepare to enter by penance, and cannot actually enter except by faith and by baptism, which, though an external rite, signifies and produces an interior regeneration.

This kingdom is opposed to none other than to that of Satan and to the power of darkness. It demands of its subjects a spirit of detachment from riches and earthly things, and a spirit of gentleness. They must hunger and thirst after justice, and more than this, they must deny themselves and carry the cross. Christ as our Redeemer purchased the Church at the price of his own blood; as priest he offered himself, and continues to offer himself as a victim for our sins. Is it not evident, then, that his kingly dignity partakes in a manner of both these offices?

It would be a grave error, on the other hand, to say that Christ has no authority whatever in civil affairs, since, by virtue of the absolute empire over all creatures committed to him by the Father, all things are in his power. Nevertheless, during his life on earth he refrained from the exercise of such authority, and although he himself disdained to possess or to care for earthly goods, he did not, nor does he today, interfere with those who possess them.
Thus the empire of our Redeemer embraces all men… Nor is there any difference in this matter between the individual and the family or the State; for all men, whether collectively or individually, are under the dominion of Christ. In him is the salvation of the individual, in him is the salvation of society. “Neither is there salvation in any other, for there is no other name under heaven given to men whereby we must be saved.” (Acts 3:12.)

He is the author of happiness and true prosperity for every man and for every nation. “For a nation is happy when its citizens are happy. What else is a nation but a number of men living in concord?” (St. Augustine.) If, therefore, the rulers of nations wish to preserve their authority, to promote and increase the prosperity of their countries, they will not neglect the public duty of reverence and obedience to the rule of Christ.

The plague of anti-clericalism

If We ordain that the whole Catholic world shall revere Christ as King, We shall minister to the need of the present day, and at the same time provide an excellent remedy for the plague which now infects society. We refer to the plague of anti-clericalism, its errors and impious activities.

This evil spirit, as you are well aware, Venerable Brethren, has not come into being in one day; it has long lurked beneath the surface. The empire of Christ over all nations was rejected. The right which the Church has from Christ himself, to teach mankind, to make laws, to govern peoples in all that pertains to their eternal salvation, that right was denied. Then gradually the religion of Christ came to be likened to false religions and to be placed ignominiously on the same level with them. It was then put under the power of the state and tolerated more or less at the whim of princes and rulers. Some men went even further, and wished to set up in the place of God’s religion a natural religion consisting in some instinctive affection of the heart. There were even some nations who thought they could dispense with God, and that their religion should consist in impiety and the neglect of God.

The rebellion of individuals and states against the authority of Christ has produced deplorable consequences. We lamented these in the Encyclical Ubi Arcano; we lament them today: the seeds of discord sown far and wide; those bitter enmities and rivalries between nations, which still hinder so much the cause of peace; that insatiable greed which is so often hidden under a pretense of public spirit and patriotism, and gives rise to so many private quarrels; a blind and immoderate selfishness, making men seek nothing but their own comfort and advantage, and measure everything by these; no peace in the home, because men have forgotten or neglect their duty; the unity and stability of the family undermined; society in a word, shaken to its foundations and on the way to ruin.

If to Christ our Lord is given all power in heaven and on earth; if all men, purchased by his precious blood, are by a new right subjected to his dominion; if this power embraces all men, it must be clear that not one of our faculties is exempt from his empire. 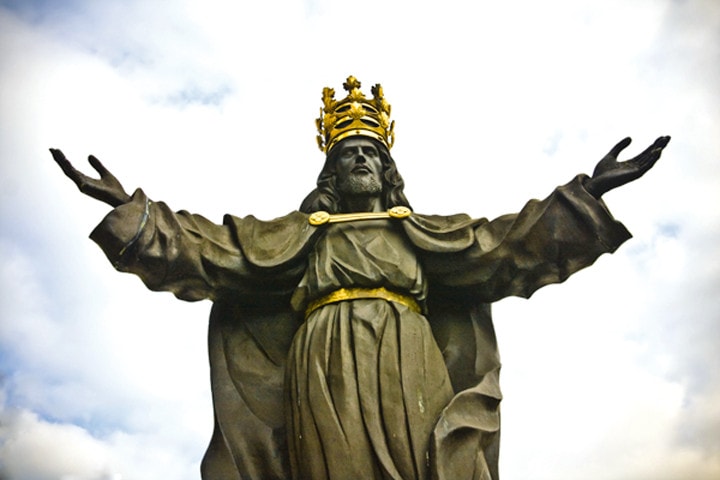