Vatican: Receiving the Eucharist kneeling will be the norm at papal liturgies 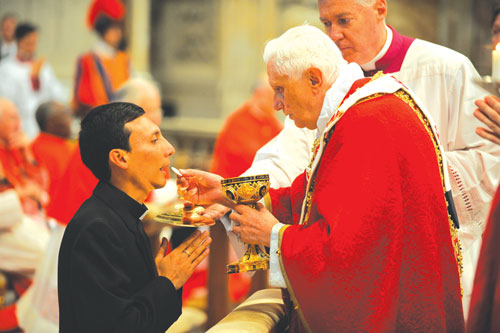 VATICAN CITY (CNS) – Receiving the Eucharist on the tongue while kneeling before the pope will become the norm at papal liturgies, said the Vatican’s liturgist.

While current norms allow the faithful to receive the Eucharist in the hand while standing, Pope Benedict XVI has indicated a preference for the more traditional practice, said Msgr. Guido Marini, master of papal liturgical ceremonies.

Kneeling and receiving Communion on the tongue highlights "the truth of the real presence (of Christ) in the Eucharist, helps the devotion of the faithful and introduces the sense of mystery more easily," he said in a June 26, 2008 interview with the Vatican newspaper, L’Osservatore Romano.

Pastorally speaking, he said "it is urgent to highlight and recover" these aspects of the sacredness and mystery of the Eucharist in modern times.

Generally at papal Masses, those receiving Communion from the pope stand and the majority choose to receive on the tongue.

But starting with a May 22 Mass outside the Basilica of St. John Lateran, two ushers placed a kneeler in front of the altar and the chosen communicants all knelt and received on the tongue.

At a June 15 Mass in the southern Italian port city of Brindisi, the pope again distributed Communion to the faithful on the tongue while they were kneeling.

In the Vatican newspaper interview, Msgr. Marini was asked if this practice was destined to become the norm in all papal celebrations, and he replied, "I really think so." (Editor’s note: This is how Holy Communion was distributed by the Pope in Sydney, Australia, during World Youth Day.)

He said "it is necessary not to forget that the distribution of Communion in the hand, from a juridical standpoint, remains up to now an indult," which is an exemption from a general requirement that is granted by the Vatican to the bishops’ conferences which have requested it. He said the pope’s adoption of the traditional practice of distributing Communion "aims to highlight the force of the valid norm for the whole church."

However, the pope’s preference for the traditional practice is not meant to "take anything away from the other" permissible form of standing or receiving the Eucharist in the hand, he said.