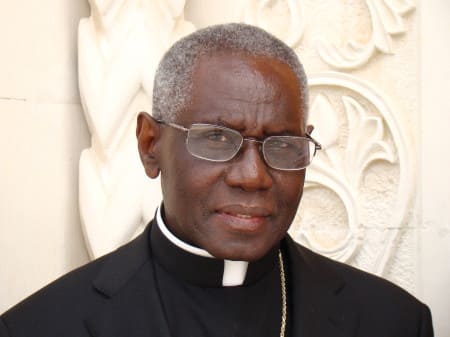 Invited for the 700th Anniversary of the Diocese of Luçon, in France, Cardinal Robert Sarah (a native of Guinea, Africa, and prefect of the Congregation for Divine Worship and the Discipline of the Sacraments since 2014) praised those martyred during the French Revolution of 1789. In his homily at the Mass celebrated on Saturday evening, August 12th, in Puy-du-Fou, a historical theme park founded 40 years ago to emphasize the history of the people of Vendée, a region in Western France, he recalled especially their resistance to the revolutionaries who wanted to ban Catholicism.

The castle of the Puy-du-Fou, with its hurting ruins, abandoned by man, seems to rise like a cry towards Heaven. Its ripped entrails remind the world that, faced with the hatred of the Faith, a people stood up: the people of the Vendée!

My dear friends, by giving life to these ruins every night, you are giving life back to the dead! You are giving life to all these people of the Vendée who died for their faith, for their churches and for their priests… You give life to these 300,000 men, women and children who fell victims to the Reign of Terror! You give voice to all those that the “Terreur” wanted to silence, because they refused to have torn from them the freedom to believe and to celebrate the Holy Mass! You honor those whom atheistic ideology wanted to drown in oblivion. (…)

Your work is necessary! For in our day, we seem to have become numb! Faced with the dictatorship of relativism, and a terrorism that once again seeks to tear God from the hearts of our children, we need to rediscover the freshness of mind, the joyful and fervent simplicity of these saints and these martyrs.

My brothers, the people of the Vendée were putting into practice that which today’s reading teaches us, God is not in thunder and lightning, He is not in the power and the clamor of arms. He is hidden in the murmur of the breeze! (1 Kings 19:11-13.) Faced with the planned and methodical onslaught of the “Terreur”, the Vendéens knew full well that they would be crushed. Nevertheless, they offered their sacrifice to the Lord while singing. They were that murmuring breeze, the breeze that appeared to be swept away by the powerful storm of the infernal columns. But God was there. His power revealed itself in their weakness!

History – true history – knows that deep down the peasants of the Vendée were victorious. Through their sacrifice, they stopped the lie of ideology from reigning supreme. Thanks to the Vendéens, the Revolution was forced to drop its mask and reveal its true face: its hatred of God and of the faith. Thanks to the Vendéens, priests did not become the servile slaves of a totalitarian state; they would remain free servitors of Christ and of the Church. The Vendéens heard the call Christ makes in today’s Gospel: “Take courage, it is I; do not be afraid” (Mat 14:27). When the storm raged, when their boat took on water from all sides, they were not afraid: such was their certainty that beyond death, the Heart of Jesus would be their sole homeland!

My friends, we Christians need this spirit of the people of Vendée! We need their example! Like them, we must leave our sowing and harvesting, leave our furrows in order to wage the battle, not for the interests of men, but for God!

Who shall stand up today for God? Who shall dare to confront the modern persecutors of the Church? Who shall have the courage to arise, armed only with the Rosary and the Sacred Heart, to face the columns of death of our times; relativism, indifferentism and the contempt of God? Who shall tell this world that the only liberty worth dying for is the liberty to believe?

My brothers, just like our Vendéen brothers of old, we are called today to witness, which means martyrdom! Today in the East, in Pakistan, in Africa, our Christian brothers are dying for their faith, crushed by the columns of persecuting Islamism.

And you, people of France, people of the Vendée, when will you at last stand up with the peaceful weapons of prayer and charity to defend your faith? My friends, the blood of martyrs runs through your veins. Be faithful to it! Spiritually, we are all sons of the martyred Vendée! Even we Africans who have received so many missionaries from the Vendée, who came to die in our lands in order to proclaim Christ! We owe it to ourselves to be faithful to their heritage! 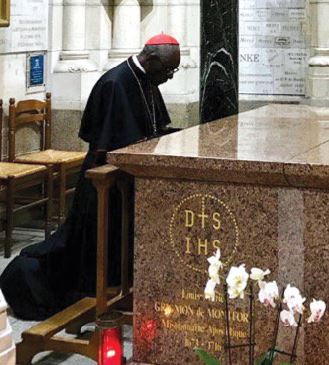 Earlier in the day, Cardinal Sarah prayed at the tomb of St. Louis-Marie Grignion de Montfort in Saint-Laurent-sur-Sèvre, Vendée.

The soul of these martyrs surrounds us in this place. What are they telling us? What do they want to pass on to us? First of all, their courage! When it comes to God, there can be no compromise! The honor of God is not open to discussion! And it must start with our personal life of prayer and adoration. It is time, my friends, for us to revolt against the practical atheism that is stifling our lives! Let us pray as families, let us leave the first place to God! A family that prays is a family that is alive! A Christian who dœs not pray, who dœs not leave room for God through silence and adoration, will end up dying!

From the example of the Vendéens, we must also learn to love the priesthood. It is because their “good priests” were threatened that they went into revolt. As to you, the younger ones, if you want to be faithful to the example of your elders, love your priests, love the priesthood! You must ask yourselves the question: and I, am I also called to be a priest, following in the footsteps of all these good priests who were martyred by the Revolution? Will I also have the courage to give my whole life for Christ and for my brothers?

The martyrs of the Vendée also teach us the sense of forgiveness and mercy. Faced with persecution and with hatred, they kept alive in their hearts the responsibility for peace and forgiveness. Remember how their chief, Bonchamp, ordered 5,000 prisoners to be released a few minutes before dying. Let us be able to confront hatred without resentment and without bitterness. We are the army of the Heart of Jesus, and as He, we want to be full of sweetness!

Finally, we must learn from the martyrs of the Vendée that sense of generosity and of gratuitous giving. Your ancestors did not fight for their interests. They had nothing to gain. Today, they give us a lesson in humanity. We are living in a world marked by the dictatorship of money, of benefits, of riches. The joy of gratuitous giving is everywhere despised and trampled upon.

But only a love that is generous, the disinterested gift of one’s own life, can vanquish the hatred of God and of men that is the matrix of all revolutions. The Vendéens have taught us to resist against all these revolutions. They have shown us that facing the infernal columns, as when facing the Nazi extermination camps and the communist Gulag, facing the barbarity of Islamism, there is only one answer: the gift of self, of one’s whole life. Only love conquers the powers of death!

Even now, perhaps more than ever, the ideologues of the revolution want to annihilate the natural place for gift of self, of joyful generosity and of love! I am speaking of the family! Gender ideology, the contempt of fruitfulness and of fidelity, are the new slogans of this revolution. Families have become the new Vendées to exterminate. Their disappearance is being methodically planned, as was that of the Vendée in the past.

These new revolutionaries are worried by the generosity of large families. They mock Christian families, because these embody everything that they hate. They are ready to attack Africa with new infernal columns in order to pressure families, and to force upon them sterilization, abortion and contraception. Africa, like the Vendée, will resist! Families everywhere must be the joyous spearheads of revolt against this new dictatorship of egoism!

Is is now in the heart of every family, of every Christian, of every man of goodwill that an interior Vendée must arise! Every Christian is, spiritually, a Vendéen! Let us not allow generous and gratuitous giving to be stifled within us. Let us learn, as the martyrs of the Vendée, to draw this gift from its source: in the Heart of Jesus. Let us pray that a powerful and joyful interior Vendée may arise in the Church and in the world! Amen!