The Rosary is a powerful weapon against heresies

on Wednesday, 01 January 2003. Posted in Encyclical letters & Other documents of the Magisterium

In his new Apostolic Letter on the Rosary, Pope John Paul II mentions Pope Leo XIII's Encyclical Letter “Supremi Apostolatus Officio” on the Rosary, written in 1883. Here are excerpts from this letter: 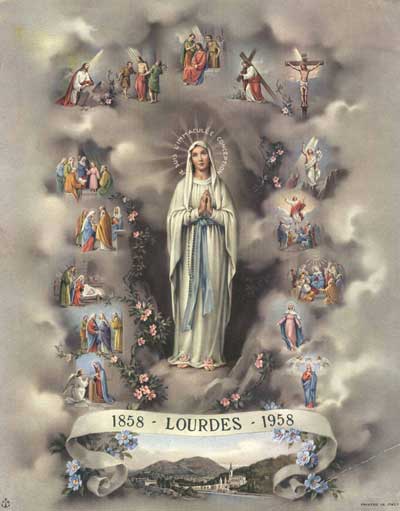 It has always been the habit of Catholics in danger and in troublous times to fly for refuge to Mary, and to seek for peace in Her maternal goodness; showing that the Catholic Church has always, and with justice, put all her hope and trust in the Mother of God. And truly the Immaculate Virgin, chosen to be the Mother of God and thereby associated with Him in the work of man's salvation, has a favour and power with Her Son greater than any human or angelic creature has ever obtained, or ever can gain. And, as it is Her greatest pleasure to grant Her help and comfort to those who seek Her, it cannot be doubted that She would deign, and even be anxious, to receive the aspirations of the universal Church.

This devotion, so great and so confident, to the august Queen of Heaven, has never shone forth with such brilliancy as when the militant Church of God has seemed to be endangered by the violence of heresy spread abroad, or by an intolerable moral corruption, or by the attacks of powerful enemies. Ancient and modern history, and the more sacred annals of the Church, bear witness to public and private supplications addressed to the Mother of God, to the help She has granted in return, and to the peace and tranquility which She had obtained from God. Hence Her illustrious titles of helper, consoler, mighty in war, victorious, and peace-giver. And amongst these is specially to be commemorated that familiar title derived from the Rosary by which the signal benefits She has gained for the whole of Christendom have been solemnly perpetuated.

There is none among you, venerable brethren, who will not remember how great trouble and grief God's Holy Church suffered from the Albigensian heretics, who sprung from the sect of the later Manicheans, and who filled the South of France and other portions of the Latin world with their pernicious errors, and carrying everywhere the terror of their arms, strove far and wide to rule by massacre and ruin. Our merciful God, as you know, raised up against these most direful enemies a most holy man, the illustrious parent and founder of the Dominican Order. Great in the integrity of his doctrine, in his example of virtue, and by his apostolic labours, he proceeded undauntedly to attack the enemies of the Catholic Church, not by force of arms; but trusting wholly to that devotion which he was the first to institute under the name of the Holy Rosary, which was disseminated through the length and breadth of the earth by him and his pupils.

Guided, in fact, by divine inspiration and grace, he foresaw that this devotion, like a most powerful warlike weapon, would be the means of putting the enemy to flight, and of confounding their audacity and mad impiety. Such was indeed its result. Thanks to this new method of prayer — when adopted and properly carried out as instituted by the Holy Father St. Dominic — piety, faith, and union began to return, and the projects and devices of the heretics to fall to pieces. Many wanderers also returned to the way of salvation, and the wrath of the impious was restrained by the arms of those Catholics who had determined to repel their violence.

The efficacy and power of this devotion was also wondrously exhibited in the sixteenth century, when the vast forces of the Turks threatened to impose on nearly the whole of Europe the yoke of superstition and barbarism. At that time the Supreme Pontiff, St. Pius V, after rousing the sentiment of a common defence among all the Christian princes, strove, above all, with the greatest zeal, to obtain for Christendom the favour of the most powerful Mother of God. So noble an example offered to heaven and earth in those times rallied around him all the minds and hearts of the age. And thus Christ's faithful warriors, prepared to sacrifice their life and blood for the salvation of their faith and their country, proceeded undauntedly to meet their foe near the Gulf of Corinth, while those who were unable to take part formed a pious band of supplicants, who called on Mary, and unitedly saluted Her again and again in the words of the Rosary, imploring Her to grant the victory to their companions engaged in battle.

Our Sovereign Lady did grant Her aid; for in the naval battle by the Echinades Islands, the Christian fleet gained a magnificent victory, with no great loss to itself, in which the enemy was routed with great slaughter. And it was to preserve the memory of this great favour thus granted, that the same Most Holy Pontiff desired that a feast in honour of Our Lady of Victories should celebrate the anniversary of so memorable a struggle, the feast which Gregory XIII dedicated under the title of “The Holy Rosary.”

Since, therefore, it is clearly evident that this form of prayer is particularly pleasing to the Blessed Virgin, and that it is especially suitable as a means of defence for the Church and all Christians, it is in no way wonderful that several others of Our Predecessors have made it their aim to favour and increase its spread by their high recommendations...

Moved by these thoughts and by the examples of Our Predecessors, We have deemed it most opportune for similar reasons to institute solemn prayers and to endeavour by adopting those addressed to the Blessed Virgin in the recital of the Rosary to obtain from Her Son Jesus Christ a similar aid against present dangers. You have before your eyes, Venerable Brethren, the trials to which the Church is daily exposed; Christian piety, public morality, nay, even faith itself, the supreme good and beginning of all the other virtues, all are daily menaced with the greatest perils.

Nor are you only spectators of the difficulty of the situation, but your charity, like Ours, is keenly wounded; for it is one of the most painful and grievous sights to see so many souls, redeemed by the blood of Christ, snatched from salvation by the whirlwind of an age of error, precipitated into the abyss of eternal death. Our need of divine help is as great today as when the great Dominic introduced the use of the Rosary of Mary as a balm for the wounds of his contemporaries.

That great saint indeed, divinely enlightened, perceived that no remedy would be more adapted to the evils of his time than that men should return to Christ, who “is the way, the truth, and the life,” by frequent meditation on the salvation obtained for Us by Him, and should seek the intercession with God of that Virgin, to whom it is given to destroy all heresies. He therefore so composed the Rosary as to recall the mysteries of our salvation in succession, and the subject of meditation is mingled and, as it were, interlaced with the Angelic salutation and with the prayer addressed to God, the Father of Our Lord Jesus Christ.

We, who seek a remedy for similar evils, do not doubt therefore that the prayer introduced by that most blessed man with so much advantage to the Catholic world, will have the greatest effect in removing the calamities of our times also...

And you, Venerable Brethren, the more you have at heart the honour of Mary and the welfare of human society, the more diligently apply yourselves to nourish the piety of the people towards the great Virgin, and to increase their confidence in Her. We believe it to be part of the designs of Providence that, in these times of trial for the Church, the ancient devotion to the august Virgin should live and flourish amid the greatest part of the Christian world.

May now the Christian nations, excited by Our exhortations, and inflamed by your appeals, seek the protection of Mary with an ardour growing greater day by day; let them cling more and more to the practice of the Rosary, to that devotion which our ancestors were in the habit of practicing, not only as an ever-ready remedy for their misfortunes, but as a whole badge of Christian piety. The heavenly Patroness of the human race will receive with joy these prayers and supplications, and will easily obtain that the good shall grow in virtue, and that the erring should return to salvation and repent; and that God who is the avenger of crime, moved to mercy and pity may deliver Christendom and civil society from all dangers, and restore to them the peace so much desired.