The power of the Medal of St. Benedict 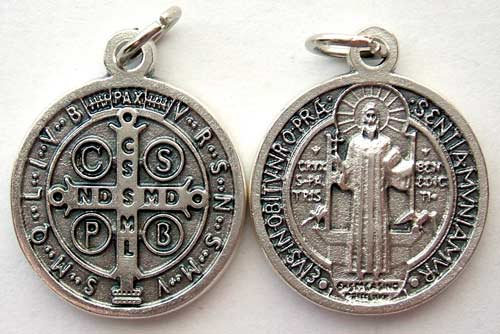 St. Benedict was the father of Western monasticism. He was born in Nursia, Italy, in 480. Beginning in 520, he founded twelve monasteries in the region of Subiaco. The foundation at Monte Cassino (529) became the cradle of his Order. His twin sister was St. Scholastica. Benedict died on March 21, 542.

St. Benedict had a profound veneration for the Holy Cross and for our Saviour Crucified. In virtue of the sign of the Cross, he wrought many miracles and exercised great power over the spirits of darkness. In consequence of the great veneration in which St. Benedict was held from the early Middle Ages, it followed that a medal was struck. His medal has exceptional powers against the demons of Hell.

The medal of Saint Benedict is one of the sacramentals of the Church. The value and power of the medal must be ascribed to the merits of Christ Crucified, to the efficacious prayers of St. Benedict, to the blessing of the Church, and especially to the faith and holy disposition of the person using the medal.

The front of the medal shows St. Benedict holding a cross in one hand and the book of his Rule in the other. Flanking him on either side are the words: Crux S. Patris Benedicti (The Cross of the Holy Father Benedict). Below his feet are these words: Ex S M Casino MDCCCLXXX (From the Holy Mount of Cassino, 1880). On that date, Monte Cassino was given the exclusive right to produce this medal.

Inscribed in the circle surrounding Benedict are the words: Ejus in obitu nostro presentia muniamur (May his presence protect us in the hour of death).

The other side of the medal is where the real exorcistic force reveals itself. In the center is the Cross. Benedict loved the Cross and used it to drive away demons.

The four large letters at the angles of the Cross: C.S.P.B. stand for Crux Sancti Patris Benedicti (The Cross of the Holy Father Benedict).

Encircling the Cross in a circle around the right margin are these letters V.R.S.N.S.M.V., meaning Vade retro Satana; nunquam suade mihi vana (Begone Satan! Suggest not to me thy vain things).

Around the left margin of the circle are these letters: S.M.Q.L.I.V.B., meaning Sunt mala quae libas; ipse venena bibas (The drink you offer is evil; drink that poison yourself). At the top of the circle is the word PAX (Peace).

No special way of carrying or applying the medal is prescribed. It may be worn around the neck, attached to the Scapular or the Rosary, or simply carried in one’s pocket.

Often it is placed in the fields, the foundations of buildings, or attached to automobiles to call down God’s blessing and the protection of St. Benedict. No particular prayer is prescribed, as the devout wearing itself is a continual silent prayer.