The Pope of Our Lady of Fatima 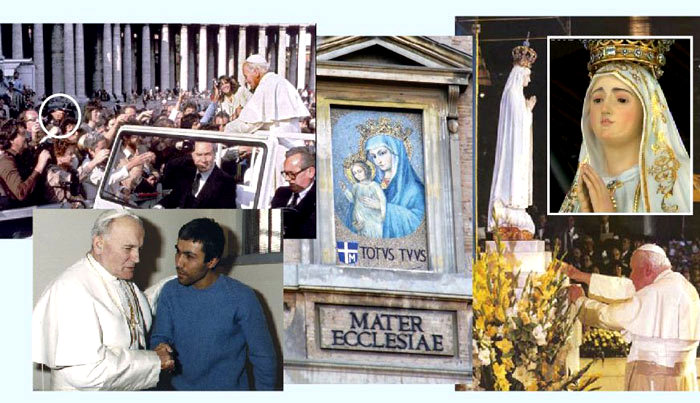 On May 13, 1981, in St. Peter's Square, exactly 64 years after the first apparition of the Virgin Mary to the three shepherd children in Fatima, Portugal; Turkish gunman Mehmet Ali Agca took aim at the Pope with a handgun (circled at left, above). Four bullets hit John Paul II, two of them lodging in his lower intestine, the others hitting his left hand and right arm.

The bullet missed his central aorta by a few millimetres — had it not missed this, the Holy Father would have been killed instantly. The Pope, who lost nearly three-quarters of his blood and suffered shock from blood loss, underwent five hours of emergency intestinal surgery at the hospital.

While he was in the hospital, Pope John Paul reviewed the Church’s documentation of Fatima and the Third Secret of Fatima. He was convinced that Our Lady of Fatima had saved his life. Later that year, he had a mosaic of the Virgin Mary (Mater Ecclesiae — Mother of the Church) installed on St. Peter’s Square. He went three times afterwards to the shrine of Fatima in Portugal (1982, 1991 and 2000) — to thank the Virgin Mary. On March 25, 1984, to fulfill the request of Our Lady of Fatima, the Pope consecrated the world — including Russia — to the Immaculate Heart of Mary and Communism collapsed soon afterward.

On Dec. 27, 1983, when Pope John Paul II visited Mehmet Ali Agca, his would-be killer in jail, the man asked him: “Why didn’t you die? I know that my aim was true and I know that the bullet was very powerful and mortal.” The Pope responded: “One hand fired the shot. Another (the hand of the Virgin Mary) guided it.”

As a measure of his gratitude, John Paul gave the bullet that was extracted from his abdomen to the shrine; the bullet today forms part of the crown of the statue of the Virgin of Fatima. During John Paul's 2000 visit to Fatima, the third part of the message the Virgin gave to the three children in 1917 was revealed; it was a description of the assassination attempt on Pope John Paul: the “bishop clothed in white” who prays for all the faithful is the Pope. As he makes his way with great effort towards the Cross amid the corpses of those who were martyred (bishops, priests, men and women religious and many lay persons), he too falls to the ground, apparently dead, under a burst of gunfire.