The Pope insists on individual confession

Written by Yvette Poirier on Tuesday, 01 January 2002. Posted in Confession

Celebrations with general absolution are forbidden 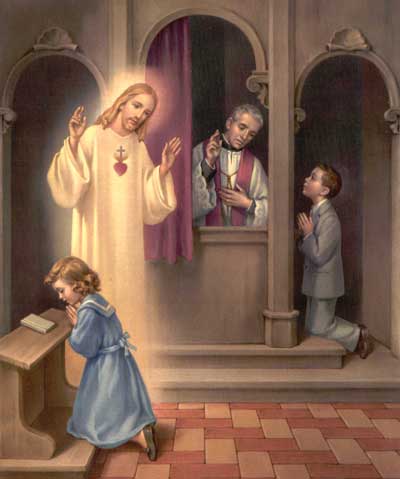 Pope John Paul II recently asked all the Bishops in the world to put an end, in parishes, to penitential celebrations with general absolution, and to make parishioners rediscover the importance of the Sacrament of Penance, through individual confession. For example, Cardinal Jean-Claude Turcotte, of Montreal, Canada, sent, on Oct. 22, 2001, a letter to all the priests of his Diocese about this request of the Holy Father. Here are some excerpts:

“The faculty of absolving collectively penitents during Advent and Lent has therefore been withdrawn. The aim of this letter is to inform you officially about this decision. It is important for us to stand by the universal Church by respecting, as faithfully as possible, the norms established for this issue. The work begun to help the faithful of our Diocese rediscover the richness of the Sacrament of Penance must therefore continue.”

Another Canadian Bishop, from the Maritimes, wrote to his faithful: “When we made our Ad Limina visit to Rome in September, two Congregations were very clear about General Absolution. Either we brought it to an end or we would receive detailed orders telling us how to do it. Faced with these alternatives, there is no choice... The truth is that there is a much larger problem. We need a massive education on the Sacrament of Confessions and all its elements. Among the things to teach are the following:

“That Jesus gave to the Church the power to forgive sins, and that this power is exercised by the priest in the Sacrament of Confession. Do all Catholics understand and believe this?

“That to be forgiven our sins, there must be sorrow and a sincere plan and desire to change. Therefore, for example, people living in sinful relationships have to end them, before they can make an honest and valid confession. Do all Catholics know and believe this?”

Several Bishops have abided by the request of the Pope and asked their priests to put an end to this practice of general absolution, but unfortunately, many priests do not want to obey to the orders of their Bishops. Let us pray for these recalcitrant priests so they will humbly submit to the teachings of the Catholic Church, which is led by the Holy Spirit as regards dogma and morals.

The Sacrament of Penance is not an invention of man. It is Our Lord Himself who instituted it when He said to His Apostles: “Whose sins you shall forgive, they are forgiven them; and whose sins you shall retain, they are retained” (John 20:23). This power to forgive sins has been given by Our Lord to His Apostles and all of their successors, the Bishops and the priests.

In his Letter to the priests for Holy Thursday 2001, Pope John Paul II recalled the importance of the Sacrament of Penance:

“We need to declare with firmness and conviction that the Sacrament of Penance is the ordinary means of obtaining pardon and the remission of grave sins committed after Baptism. We ought to celebrate the Sacrament in the best possible way, according to the forms laid down by liturgical law, so that it may lose none of its character as the celebration of God's mercy.”

The Prefect of the Congregation for Divine Worship

In October, 1999, Cardinal Jorge Arturo Medina Estevez, Prefect of the Congregation for Divine Worship and the Discipline of the Sacraments, spoke about the Sacrament of Penance and “general absolutions” at the Special Assembly for Europe of the Synod of Bishops, gathered in the Vatican:

“The constant teaching of the Church affirms that the Sacrament of Reconciliation is composed, like travail, of pain for sins committed, the resolution to sin no longer, the integral confession of sins to the priests, and his absolution. The Church's doctrine and norms admit that in cases of the danger of imminent death and other well-determined cases, the priest may absolve penitents without prior integral confession of sins, as long as penitents desire to do this afterwards, as soon as possible.”

In many parishes, “general absolutions” have led the vast majority of parishioners to abandon individual confession. This is wrong, as Cardinal Medina Estevez points out:

“It is necessary to emphasize that individual and integral confession of sins is the only ordinary way to celebrate this sacrament, and that `general absolutions' are an absolutely exceptional form, for occasions when it is impossible to have recourse to the ordinary form.”

General absolutions can be given only in extraordinary circumstances, like a sinking ship: a priest on board, seeing the impossibility of hearing the individual confession of all the people on the boat before it sinks, asks them to examine their consciences, sincerely regret their sins, and he gives them general absolution. If there are people among them who survive the tragedy, they must still go to a priest for individual confession to have their mortal sins forgiven. Otherwise, the general absolution they received is invalid. Cardinal Medina Estevez continues:

“One must keep in mind that refusing integral individual confession after receiving general absolution causes the latter to be invalid. All priests know what has been sacrificed to the ministry of the confessional, but the example of Blessed Padre Pio, whose shrine is the second in the world as to the influx of pilgrims, demonstrates how fruitful that ministry of sacramental mercy is.”

Alas! How many Catholics today no longer go to the confessional! For marriages and funerals, you see them all go and receive Holy Communion, although many of them do not practice their Faith, or are not in the state of grace. Someone who has committed a mortal sin, even if he regrets it, must go and confess it to a priest before receiving Holy Communion: “But let a man prove himself: and so let him eat of that bread, and drink of the chalice. For he that eateth and drinketh unworthily, eateth and drinketh judgment to himself, not discerning the body of the Lord” (1 Cor. 11:28-29).

The integrity of the Sacrament

On March 20, 2000, Cardinal Medina Estevez wrote a Circular Letter concerning the integrity of the Sacrament of Penance. Here are some excerpts:

“The divine constitution of the Sacrament of Penance requires each penitent to confess to a priest all mortal sins, as well as any specifying moral circumstances that he remembers after a diligent examination of conscience. For this reason the Code of Canon Law states clearly that ‘individual and integral confession and absolution is the sole ordinary means by which a member of the faithful who is conscious of mortal sin is reconciled with God and with the Church. Physical or moral impossibility alone excuses from such confession’ (can. 960). In specifying this obligation, the Church has insistently reiterated that ‘all the faithful who have reached the age of discretion are bound faithfully to confess their mortal sins at least once a year’. ‘Energetic efforts are to be made to avoid any risk that this traditional practice of the Sacrament of Penance will fall into disuse.’... This disposition would exclude communal celebrations of the sacrament in which penitents are invited to present a written list of sins to the priest confessor. It should be noted that such innovations also risk compromising the inviolable seal of sacramental confession.

“In giving consideration to the authentic discipline of the Church concerning ‘general absolution’, the recent interdicasterial meeting of the Roman Curia with a representation of Bishops of the Episcopal Conference of Australia noted that: ...communal celebrations have not infrequently occasioned an illegitimate use of general absolution. This illegitimate use, like other abuses in the administration of the Sacrament of Penance, is to be eliminated.

“The teaching of the Church is reflected in precise terms in the requirements of the Code of Canon Law (cf. esp. canons 959-964). In particular it is clear that `A sufficient necessity is not... considered to exist when confessors cannot be available merely because of a great gathering of penitents, such as can occur on some major feastday or pilgrimage' (canon 961, 1, 2).

“Local Ordinaries and priests, to the degree that it applies to them, have an obligation in conscience to ensure that penitents have regular and frequent scheduled opportunities for individual and integral confession of sins in all parish churches, and insofar as possible in other pastoral centres. In addition, priests are called upon to be generous in making themselves available outside of those scheduled times to celebrate individual and integral confession whenever the faithful would reasonably ask for it. Other works, for lack of time, may have to be postponed or even abandoned, but not the confessional.”

Let us pray so that Christians deepen their knowledge of the Faith, in order to understand the importance of having recourse to the Sacrament of Penance, and of receiving worthily the Holy Eucharist, where Our Lord is really present with His Body, Blood, Soul, and Divinity: “He that eateth My flesh, and drinketh My blood, abideth in Me, and I in him... He that eateth that bread, shall live for ever” (John 6:57-59).