The Lily of Palestine Blessed Mariam Baouardy, “the Little Arab”

“The humble heart is the chalice holding God.” – Bl. Mariam

In a Mass celebrated to commemorate her feast day, His Beatitude Fouad Twal, Latin Patriarch of Jerusalem, said of Blessed Mariam Baouardy, “The various ‘mystical’ phenomena that characterize her life should not obscure her fundamental qualities: her humility, deep fraternal charity and total surrender to the Holy Spirit.”

Mariam, who was beatified by Pope St. John Paul II in 1983, was named patroness of Peace in the Holy Land. She was miraculously cured by the Blessed Virgin Mary after having had her throat slashed by the sword of an enraged Muslim for refusing to convert to Islam.

In these past weeks, we have been hearing in the news how the terrorist group, ISIS, has beheaded men, women and children, for refusing to renounce their Christian beliefs. In these turbulent times in which we live – global reports indicate that over 150,000 Christians were martyred last year alone – the story of Blessed Mariam demonstrates to us in a supernatural way that, if we remain steadfast in our faith, doing God’s Will, Mary will intercede for us also.

Mariam Baouardy, who took her vows as Mariam of Jesus Crucified, was born in Ibillin, Palestine. Her parents were Giries (George) Baouardy and Mariam Chahine. The family originated from Damascus, Syria, and were Catholics of the Melkite Greek-Catholic Rite.

When Mariam was only two years old, both her parents died. She was adopted by her uncle, who loved her and gave her every care and attention. He moved the family to Alexandria, Egypt, where at the age of 13, Mariam was promised in marriage to her aunt’s brother. The wedding had been prearranged without her consent, this being the custom at the time. Mariam was shocked and filled with a deep sadness, for she earnestly desired to give herself to God alone. The night before the wedding ceremony, she could not sleep and she prayed fervently that God might intervene. In the depths of her heart, she heard a voice saying to her, “Everything passes! If you wish to give me your heart, I will remain with you.” Mariam knew that this was the voice of Jesus. The remainder of the night was spent in deep prayer. Suddenly, towards morning, the voice said to her: “Mariam, I am with you. Follow the inspiration I shall give you.”

When she later informed her adoptive uncle that she would not marry, insisting that she wanted to remain a virgin, he flew into a rage. As punishment, she was treated as the lowest of the household servants.

Mariam felt a great loneliness. She began confiding her personal troubles to another of the servants. He, in turn, encouraged her to convert to Islam as a remedy to her problems. Realizing the young man’s intentions, she refused, proclaiming her faith in the Church of Jesus. Furious at being rejected by Mariam, her so-called protector became violent, and drawing his sword, slashed her throat. Thinking she was dead, he dumped her bloody body into a nearby alleyway.

This took place on September 8, 1858, the feast of the Birth of the Blessed Virgin Mary, and this is the account which Mariam herself gave to her Mistress of Novices at Marseilles, France years later:

“A nun dressed in blue picked me up and stitched my throat wound. This happened in a grotto somewhere. I then found myself in Heaven with the Blessed Virgin, the angels and the saints. They treated me with great kindness. In their company were my parents. I saw the brilliant throne of the Most Holy Trinity and Jesus Christ in His humanity. There was no sun, no lamp, but everything was bright with light. Someone spoke to me. They said I was a virgin, but that my book was not finished.”

The “nun in blue” outlined for Mariam her life’s program: “You will never see your family again. You will go to France where you will become a religious. You will be a child of St. Joseph before becoming a daughter of St. Teresa. You will receive the habit of Carmel in one house, you will make your profession in a second, and you will die in a third, at Bethlehem.” Mariam would later come to understand that the “nun in blue” was the Blessed Virgin Mary.

The scar on Mariam’s neck, which measured 10 cm (4 inches)in length and 1 cm in width, and in which several cartilaginous rings of the tracheal artery were missing, remained visible for the rest of her life. A doctor who at one point took care of Mariam, confessed that, “although he was an atheist, there must be a God, for from a natural point of view, she could not have lived.”

Mariam left Lebanon for Marseille, France when she was 18 years old. One morning, as she was going up to Notre-Dame de la Garde for Mass, she realized that she was being followed by a man holding the hand of a small child. The man said to her: “I know that you want to enter the convent and I will follow you until you are in the convent.” Mariam had no doubt in her mind that the stranger was St. Joseph and she knew that this was her “call” to the religious life. She therefore decided to enter the order of the Sisters of St. Joseph, founded by Saint Emily de Vialar.

Shortly afterwards, unusual phenomena began to happen. One morning while the little Arab was praying in the chapel, Our Lord appeared to her, showing her His five wounds and the crown of thorns. She heard Jesus say to His Mother, who lay prostrate at His feet: “Oh, how My Father is offended!” Mariam then sprang toward Jesus and put her hand on the wound of His Heart, exclaiming: “My God, give me, please, all these sufferings. Have mercy on sinners.” Recovering from the ecstasy she saw that her hand was covered with blood, and she began experiencing a severe pain in her side. These supernatural manifestations of the stigmata continued every Wednesday evening, into Friday morning.

When the day arrived on which Mariam should have been officially voted in as a postulant in the order of St. Joseph, she was instead refused admittance. This was a hard blow for Mariam but when she was later accepted into the Carmel of Pau, France, on June 15, 1867, she recalled the words of the “Lady in blue”, “You will be a child of St. Joseph before becoming a daughter of St. Teresa.”

In 1870, Mariam went with a small group of sisters to establish the Carmel at Mangalore, India. It was there that Mariam made her profession as Sister Mariam of Jesus Crucified. Although Mariam had experienced ecstasies most of her life, the phenomena began to be intensified upon entering Carmel; her ecstasies occurred almost daily, sometimes as many as five times a day. Many times while in ecstasy, she would be elevated high above the ground, oftentimes while she was reciting her Rosary.

This phenomena was verified for the first time on June 22, 1873 in the garden of the Carmel of Pau. Noticing her absence at supper, the mistress of novices looked for her in vain in the cloister and the orchard. Suddenly the nuns heard singing: “Love! Love!” Looking up, they discovered Mariam balancing herself without support at the top of an enormous lime tree! Advised of this, the prioress arrived, and confronted with this phenomena, did not know what to do. After saying a quick prayer, she addressed Mariam: “Sister Mariam of Jesus Crucified, if Jesus wishes it, come down through obedience without falling or hurting yourself.” At the simple word obedience, Mariam descended to the ground at once.

From the Carmel of Pau in 1872, Mariam then went on to the Holy Land where she oversaw the building of a monastery in Bethlehem. It was there, in August of 1878, that Mariam broke her left arm from a fall while carrying water to the workmen of the new Carmelite convent. Her arm did not heal but rather swelled with gangrene, and the infection spread to her lungs and respiratory tract.

Despite her suffering, Mariam began the planning for another Carmel convent at Nazareth. But knowing that she was dying, she renewed her vow as a “victim” offering her sufferings for the Church and for her adopted country France as well. On August 26, 1878, Mariam suddenly began to feel as though she were suffocating. She died soon after while softly murmuring the words, “My Jesus, mercy”, and like her Jesus, Mariam died at the age of 33.

On her tomb was engraved this inscription: “Here in the peace of the Lord reposes Sister Mariam of Jesus Crucified, professed religious of the white veil. A soul of singular graces, she was conspicuous for her humility, her obedience, and her charity. Jesus, the sole love of her heart called her to Himself in the 33rd year of her age and the12th year of her religious life at Bethlehem, August 26, 1878.”

Given the current situation for Christians in the East, Blessed Mariam, the Little Arab, “is calling” upon all her Eastern brethren, encouraging them to hold fast to their faith in the midst of the painful persecutions that they are living through. Whether in Palestine, Syria, Egypt, Lebanon, Iraq – or the many other countries of the world where Christians are suffering conflict and persecution – Mariam remains a sign of fidelity and hope, urging all to turn towards Jesus Christ. Finally, she also reminds us all that, no matter how bleak the situation may seem, Mary, our Mother, will be with us always to “stitch” our wounds. v

A special thanks to Glenn Dallaire for his website: mysticsofthechurch.com 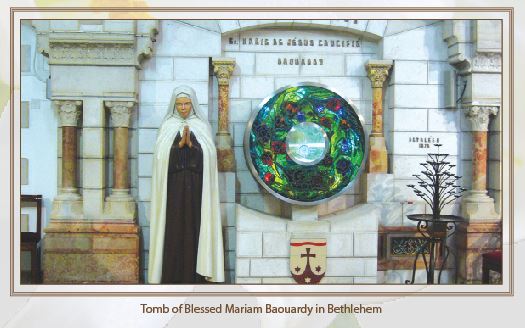