The Greatness of Saint Joseph

Image of the Eternal Father 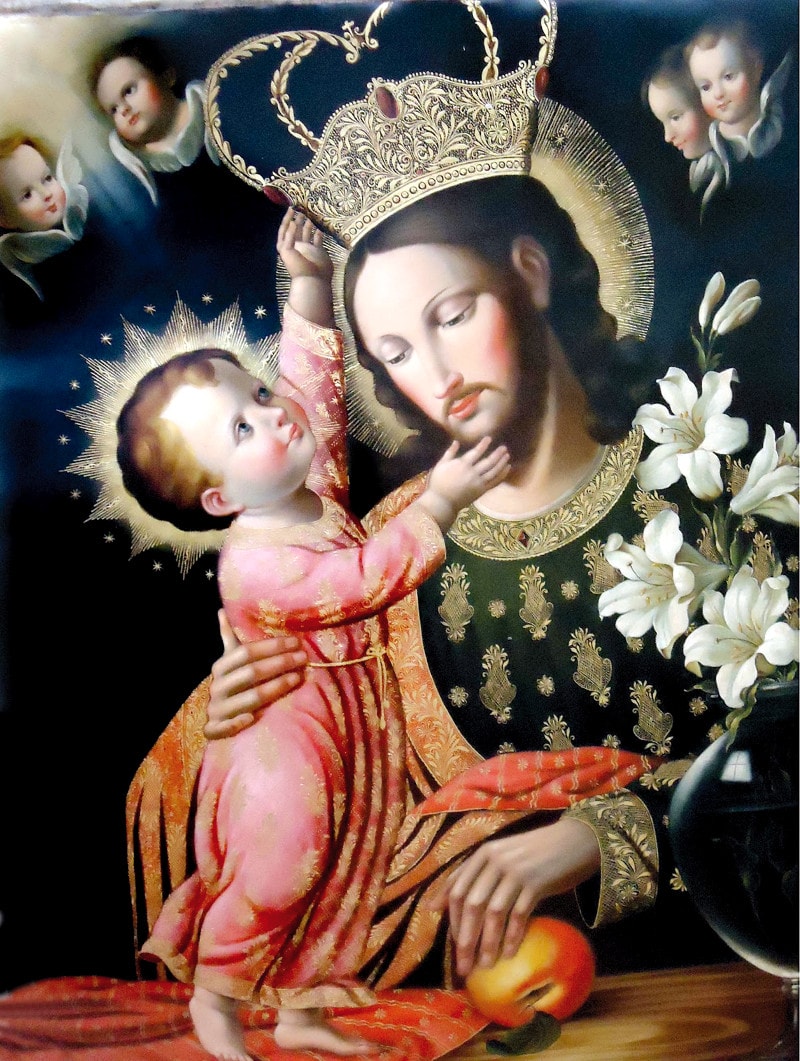 In the Catholic Church, the month of March is dedicated to Saint Joseph. The Gospel does not say much about this great saint: None of his words are quoted, but his deeds of speedy obedience to God are related, which brings the Gospel to say that Saint Joseph was a «righteous man» (Matthew 1, 19), meaning to say: He was faithful to God’s Will.

This says a lot by itself, but we cannot refrain from thinking how great must have been Saint Joseph’s virtues for God to entrust him with the protection of His most valuable possessions: His Divine Son and the Virgin Mary. At the votive chapel, the ambulatory, of Saint Joseph’s Oratory, in Montreal, one can see, in bas-reliefs, eight invocations taken from the Saint Joseph litanies:

Model of workmen , pray for us.

Guardian of virgins, pray for us.

Pillar of families, pray for us.

Solace of the afflicted, pray for us.

Hope of the sick, pray for us.

Patron of the dying, pray for us.

Terror of demons, pray for us.

Protector of Holy Church, pray for us.

Many of the saints and Popes have written on the grandeur of Saint Joseph. Saint Bernard of Clairvaux amongst them: “There are saints who have the power to protect us under given circumstances, but Saint Joseph was given the power to rescue us from all adversity, and to safeguard all who have recourse to him in a spirit of piety.”

Saint Theresa of Avila, one of the staunchest advocates for the cult to Saint Joseph, wrote: “I cannot remember a single occasion, to date, when Saint Joseph did not grant me what I had asked of him.”

Jean-Jacques Olier (1608-1657), a priest from France and the founder of the Sulpicians, wrote: “The admirable Saint Joseph was given to man to express the adorable perfections of God the Father. In his person, he carried God’s beauty, His purity, His love, His wisdom and prudence, His mercy and compassion. Only one saint was meant to represent God the Father, while an infinity of creatures, a multitude of saints, are needed to represent Jesus Christ; because the whole Church is needed to express outwardly the virtues and perfections of its adorable Head, while Saint Joseph alone represents the Eternal Father...

“This is why we must consider Saint Joseph to be the world’s greatest, best known, least understood... The Father chose this one saint to be His image upon earth. He gives him, as though to Himself, a resemblance to His invisible and hidden nature, and as far as I can see, this saint is beyond the reach of man’s capacity to understand.

“The Son of God having made Himself visible by taking a human body, spoke and exchanged with God, His Father, hidden under the guise of Saint Joseph, through whom His Father made Himself visible to the Son... Jesus saw in him a living, a spiritual and divine figure in all of his grandeur and his virtues. Jesus saw in Joseph His Father’s secrets; He heard from the mouth of this great saint the very words of His Father, of Whom Joseph was the living extension.”

Patron of the Church

On December 8, 1870, Blessed Pope Pius IX declared that Saint Joseph be the Patron Saint of the Universal Church. In 1889, Pope Leo XIII, in his encyclical letter Quamquam Pluries on the patronage of Saint Joseph, explained Pius XI’s decision:

“For what special reasons has Saint Joseph been named Patron of the Church? What motives does the Church have in asking for his protection and patronage?

“The special motives for which St. Joseph has been proclaimed Patron of the Church, and from which the Church looks for singular benefit from his patronage and protection, are that Joseph was the spouse of Mary and that he was reputed the Father of Jesus Christ. From these sources have sprung his dignity, his holiness, his glory. In truth, the dignity of the Mother of God is so lofty that no one created can rank above it.

“But as Joseph has been united to the Blessed Virgin by the ties of marriage, it may not be doubted that he approached nearer than any to the eminent dignity by which the Mother of God surpasses so nobly all created natures. For marriage is the most intimate of all unions which from its essence imparts a community of gifts between those that by it are joined together. Thus in giving Joseph the Blessed Virgin as spouse, God appointed him to be not only her life’s companion, the witness of her maidenhood, the protector of her honour, but also, by virtue of the conjugal tie, a participator in her sublime dignity.

“And Joseph shines among all mankind by the most august dignity, since by divine will he was the guardian of the Son of God and reputed as His Father among men. Hence it came out that the Word of God was humbly subject to Joseph, that he obeyed him, and that He redeemed to him all those offices that children are bound to render to their parents.

“From his two-fold dignity flowed the obligation which nature lays upon the head of families, so that Joseph became the guardian, the administrator, and the legal defender of the divine house whose chief he was. And during the whole course of his life, he fulfilled those charges and those duties. He set himself to protect with a mighty love and a daily solicitude for his spouse and the Divine Infant; regularly by his work he earned what was necessary for the one and the other for nourishment and clothing; he guarded from death the Child threatened by a monarchs jealousy, and found for Him a refuge; in the miseries of the journey and in the bitternesses of exile he was ever the companion, the assistance, and the upholder of the Virgin and of Jesus.

“Now the divine household, which Joseph ruled with the authority of a father, contained within its limits the scarce-born Church. From the same fact that the most holy Virgin is the mother of Jesus Christ is she the mother of all Christians whom she bore on Mount Calvary amid the supreme throes of the Redemption; Jesus Christ is, in a manner, the first-born of Christians, who by the adoption and Redemption are His brothers.

“And for such reasons the Blessed Patriarch looks upon the multitude of Christians who make up the Church as confided especially to his trust – this limitless family spread of the earth, over which, because he is the spouse of Mary and the father of Jesus Christ, he holds, as it were, a paternal authority. It is, then, natural and worthy that as the Blessed Joseph ministered to all the needs of the family at Nazareth and girt it about with his protection, he should now cover with the cloak of his heavenly patronage and defend the Church of Jesus Christ.”

Leo XIII concluded his encyclical with a prayer to Saint Joseph.

Guardian of the Redeemer

In 1989, on the 100th Anniversary of Leo XIII’s encyclical Quamquam Pluries, Pope Saint John Paul II wrote an apostolic exhortation, Redemptoris Custos (Guardian of the Redeemer), on “the person and mission of Saint Joseph in the life of Christ and of the Church”. Here are some excerpts:

“Inspired by the Gospel, the Fathers of the Church from the earliest centuries stressed that just as St. Joseph took loving care of Mary and gladly dedicated himself to Jesus Christ’s upbringing, he likewise watches over and protects Christ’s Mystical Body, that is, the Church, of which the Virgin Mary is the exemplar and model.

“Joseph, guardian of the Son of God… Since it is inconceivable that such a sublime task would not be matched by the necessary qualities to adequately fulfill it, we must recognize that Joseph showed Jesus ‘by a special gift from heaven, all the natural love, all the affectionate solicitude that a father’s heart can know.’ Besides fatherly authority over Jesus, God also gave Joseph a share in the corresponding love, the love that has its origin in the Father ‘from whom every family in heaven and on earth is named’ (Eph 3:15).

“The Gospels speak exclusively of what Joseph ‘did.’ Still, they allow us to discover in his “actions” - shrouded in silence as they are – an aura of deep contemplation. Joseph was in daily contact with the mystery ‘hidden from ages past,’ and which ‘dwelt’ under his roof… The total sacrifice, whereby Joseph surrendered his whole existence to the demands of the Messiah’s coming into his home, becomes understandable only in the light of his profound interior life. It was from this interior life that “very singular commands and consolations came, bringing him also the logic and strength that belong to simple and clear souls, and giving him the power of making great decisions – such as the decision to put his liberty immediately at the disposition of the divine designs, to make over to them also his legitimate human calling, his conjugal happiness, to accept the conditions, the responsibility and the burden of a family, but, through an incomparable virginal love, to renounce that natural conjugal love that is the foundation and nourishment of the family. This submission to God, this readiness of will to dedicate oneself to all that serves him, is really nothing less than that exercise of devotion which constitutes one expression of the virtue of religion.

“This patronage must be invoked as ever necessary for the Church, not only as a defense against all dangers, but also, and indeed primarily, as an impetus for her renewed commitment to evangelization in the world and to re-evangelization in those lands and nations where – as I wrote in the Apostolic Exhortation Christideles Laici – “religion and the Christian life were formerly flourishing and...are now put to a hard test.”

St. John Paul II ended his exhortation by recalling the actuality of the prayer of Saint Joseph composed by Leo XIII. “May St. Joseph obtain for the Church and for the world, as well as for each of us, the blessing of the Father, Son and Holy Spirit.”