The Glories of Mary 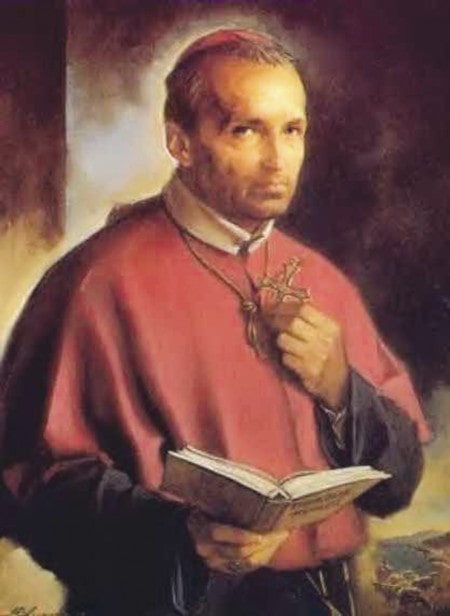 In the course of history, great saints wrote sublime things about the Virgin Mary: St. Bernard of Clairvaux, St. Dominic, St. Francis of Sales, St. John Eudes, St. Louis-Marie Grignon of Montfort, St. Maximilian Kolbe, just to name a few. But among them, someone stands out especially for the 18th century: Saint Alphonsus Mary Liguori (1696-1787), Bishop, Doctor of the Church, and founder of the Congregation of the Holy Redeemer (the Redemptorists). In 1750, he wrote “The Glories of Mary”, a book which contains numerous quotations concerning the devotion to the Blessed Virgin Mary from the Fathers and Doctors of the Church. Here are excerpts from Chapter V where St. Alphonsus explains that the intercession of Mary is necessary for our salvation:

No one will deny that Jesus Christ is the only mediator of justice, and that by his merits he has obtained for us reconciliation with God. But, on the other hand, it is impious to deny that God is pleased to grant favors at the intercession of the saints, and especially of Mary his mother, whom Jesus desires so much to see loved and honored by us. Everyone knows that honor paid to a mother redounds to her children. Hence St. Bernard says, let not any one think that by greatly praising the mother he will throw into the shade the glories of the Son; for the more he honors the mother, so much more he honors the Son. St. Ildephonsus says that all the honor which is paid to the mother and the queen is rendered to the Son and king. And there is no doubt that on account of the merits of Jesus, the great privilege has been granted to Mary to be the mediatrix of our salvation; not, indeed, mediatrix of justice, but of grace and intercession, as she is called by St. Bonaventure. St. Lawrence Justinian also says: “Can she be otherwise than full of grace, who has been made the ladder of paradise, the gate of heaven, the most true mediatrix between God and man?”

Wherefore St. Anselm well remarks that when we implore the holy Virgin to obtain graces for us, it is not that we distrust the divine mercy, but rather that we distrust our own unworthiness, and commend ourselves to Mary that her merits may compensate for our unworthiness.

All favors pass through Mary’s hands

It cannot be doubted, therefore, except by those who are deficient in faith, that it is a useful and holy thing to have recourse to the intercession of Mary. But the point that we here propose to prove is that the intercession of Mary is even necessary for our salvation: necessary, to speak properly, not indeed absolutely, but morally. And we affirm that this necessity arises from the will of God itself who has ordained that all the favors which he dispenses should pass through the hands of Mary, according to the opinion of St. Bernard, which may well be considered at the present day the common opinion of doctors and divines, as the author of “The kingdom of Mary” has already called it.

The same opinion is held by Father Contensone who, explaining the words of Jesus Christ on the cross to John, “Behold thy mother”, says: “It is as if he said, no one shall partake of my blood except by the intercession of my mother. My wounds are fountains of grace, but to none can their streams be conveyed except by the channel of Mary. Oh John, my disciple, even as thou lovest my mother, so shalt thou be loved by me.”

St. Bernard says that God had bestowed all graces on Mary that men, through her as through a channel, may receive whatever goods are in store for them. Moreover, the saint here makes an important reflection, and says that before the birth of the most holy Virgin there flowed no such current of grace for all, since this desired channel did not yet exist. But for this end, he adds Mary has been given to the world, that through this channel the divine graces might continually flow down upon us.

As Holofernes, in order to gain the city of Bethulia, directed the aqueducts to be broken, so the devil makes every effort to deprive souls of their devotion to the mother of God; for if this channel of grace were closed, he could easily succeed in gaining them to himself. The same holy father continues, and says: “Observe, then, oh souls, with what affection and devotion the Lord would have us honor this our queen, by always seeking and confiding in her protection; for in her he has placed the fullness of all good, that henceforth we may recognize as coming from Mary whatever of hope, grace, or salvation we receive.” St. Antoninus says the same thing: “All the mercies ever bestowed upon men have all come through Mary.”

For this reason, she is called the moon because, as St. Bonaventure remarks, as the moon is between the sun and the earth, and reflects upon the latter what she receives from the former, so Mary receives the celestial influences of grace from the divine Son, to transfuse them into us who are upon the earth.

For this reason, too, she is called the gate of heaven by the holy Church: “Felix coeli porta;” because, St. Bernard again observes, as every rescript of grace sent by the king comes through the palace gate, so it is given to Mary, that through her thou shouldst receive whatever thou hast. St. Bonaventure, moreover, says that Mary is called the gate of heaven, because no one can enter heaven if he does not pass through Mary, who is the door of it. (…)

St. Bernard says that as a man and a woman (Adam and Eve) have cooperated for our ruin, so it was fit that another man and another woman should cooperate for our restoration; and these were Jesus and his mother Mary. Doubtless, says the saint, Jesus Christ alone was all-sufficient for our redemption: yet it was more fitting that each sex should take part in our redemption, when both took part in our corruption. For this reason, St. Albertus Magnus calls Mary the cooperatrix with Christ in our redemption: And she herself revealed to St. Bridget, that as Adam and Eve sold the world for one apple, so her Son and herself with one heart redeemed the world. God could indeed, as St. Anselm asserts, create the world from nothing; but when it was lost by sin, he would not redeem it without the cooperation of Mary.

In three ways, says Father Suarez, the divine mother shared in the work of our salvation: first, by having merited, that is with merit of congruity, the Incarnation of the Word. Secondly, by praying much for us while she lived on the earth. Thirdly, by willingly sacrificing to God the life of her Son for our salvation; and therefore the Lord has justly ordained that as Mary has, with so much love for man, aided in the salvation of all, and thereby so greatly promoted the glory of God, all through her intercession shall obtain salvation. (…)

We will then conclude in the words of St. Bernard: “Let us strive, with all the affections of our heart, to reverence this divine mother, Mary, since this is the will of that Lord who would have us receive all good from her hands.” And the saint exhorts us, whenever we desire and ask any favor, to recommend ourselves to Mary, and trust that we shall obtain it through her intercession. For, says the saint, “If you do not deserve from God the favor you ask, Mary, who asks it in your behalf, merits to obtain it.” Hence the same Bernard exhorts us each and all, that whatever we offer to God, whether works or prayers, we recommend all to Mary, if we wish our Lord to accept them.