The dictatorship of relativism 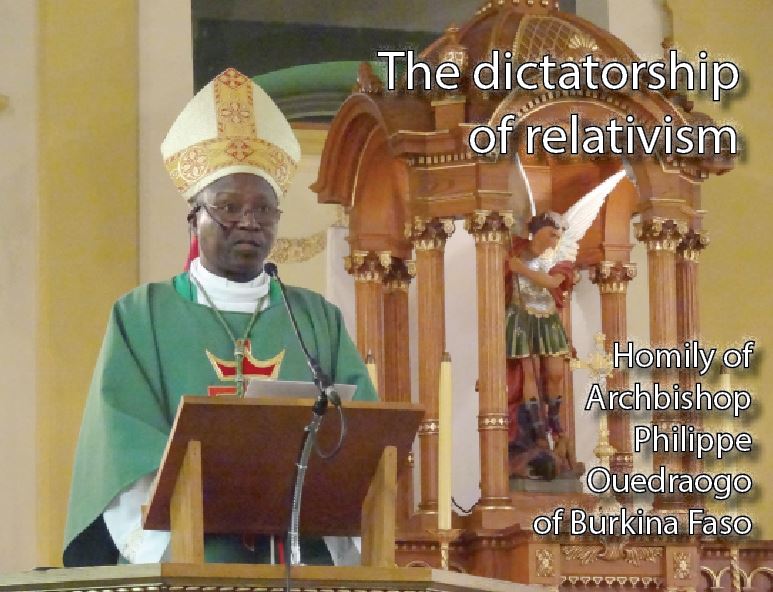 Excerpts from the homily of Most Rev. Philippe Ouedraogo, Archbishop of Ouagadougou, Burkina Faso, given at St. Michael’s Church in Rougemont during our week of study, on Sunday, August 28, 2011:

According to St. Therese of the Child Jesus: “Everything is grace” and “only God suffices.” And so with St. Therese, let us make this Eucharistic celebration an act of thanksgiving and worship to the Lord, Source and Author of all good.

It is really He who permitted the Institute of Louis Even for Social Justice to invite us here for this week of study on economic democracy, seen in the light of the Social Doctrine of the Church.

In the name of all participants, notably those of the family of God in Africa, we express our sincere gratitude for all the efforts that made our participation possible and agreeable. May the Lord – Master of the harvest – render our work fruitful and strengthen the common good between our churches for the glory of His Name and for the good of humanity!!!

In his homily for the opening of the Conclave of 2005, Pope Benedict XVI declared: “We are building a dictatorship of relativism that does not recognize anything as definitive and whose ultimate standard consists solely of one’s own ego and desires.” (Cf. Benedict XVI: Light of the World, Ignatius Press 2011, p. 51.)

From this perspective, many people no longer distinguish good from evil, truth from falsehood. The concept of truth is subject to suspicion. Certainly, there was a certain amount of abuse in some periods in the history of humanity. In the name of truth, we justified intolerance and cruelty. It was a grave error.

There are many and complex examples: in a world that has become relativistic, a new paganism has taken control, more and more, over the thoughts and actions of man. “The new religion” that is emerging or existing is the “religion of civil society” or “the great battle engaged by secularism against Christianity” according to the words of a former president of the Italian Senate. A new intolerance is spreading, a criteria of thought that is well established and imposes codes on everyone. It is the imperialism of a single way of thinking. Thus, for example, one cannot have crucifixes in public buildings; one wants to force the Church to modify Her position on homosexuality, abortion, euthanasia, contraception, the ordination of women… in one word, the authentically human moral values.

All of these examples tell us that the Church and believers cannot live their identity; religion, the Catholic faith, are denied the right to speak in an independent and visible manner.

It is a genuine tyranny that wishes to impose itself on the whole world. It is a protection that is absolute and totalitarian; we should consider it as a real enemy of freedom and tolerance, in both an individual and collective manner. All this is a cause of suffering.

Together, we should denounce very strongly this danger that attacks the whole of humanity. We should have the courage to say that man should search for the truth because he is capable of truth. That truth has a need for a criterion that permits us to verify and assure that it was not falsified; this is necessary. Only truth tells us of the constant values that give greatness to humanity. And like the Holy Father said: “That is why the humility to recognize the truth and to accept it as a standard has to be relearned and practiced again.” (See Light of the World, p. 51.) No one is forced to be a Christian. But no one should be forced to live the “new religion” as the only determining factor, one that involves all of humanity. The Second Vatican Council in Gaudium et Spes, underlined the inviolable character of individual and collective liberty, the liberty of each person to choose and to live his religion (n. 14).

Regarding the theme of our week of study, the Catholic Church – let’s say it – is the bearer of an integral humanism that shows solidarity, that is capable of animating and promoting a new social, economic and political order founded on the dignity and liberty of all human persons, to be implemented in peace, justice and solidarity. (Gaudium et Spes, n. 30.)

“Social Credit,” as a doctrine and an ensemble of principles, works to promote an economy of production at the service of each and every citizen. It is nothing but the implementation of integral humanism advocated by the Church. This humanism – according to the Church – can only be achieved if men and women, individually and in their families, know how to cultivate the moral and social values in themselves and to diffuse them in society. (Gaudium et Spes, 30.)

To conclude: as St. Augustine says: “The history of the world is a battle against two loves:

Love of self, to the point of the contempt of God;

Love of God, to the contempt of self

This was the choice of Jesus! This was the battle of Jesus: the Suffering… the Passion… the gift of His Life… Every baptized person must resemble the Master, to imitate and identify with him. Then, with the grace of God, there will rise up truly new men and women, architects of a new humanity. Amen!