The devotion to Our Lady of Good Success 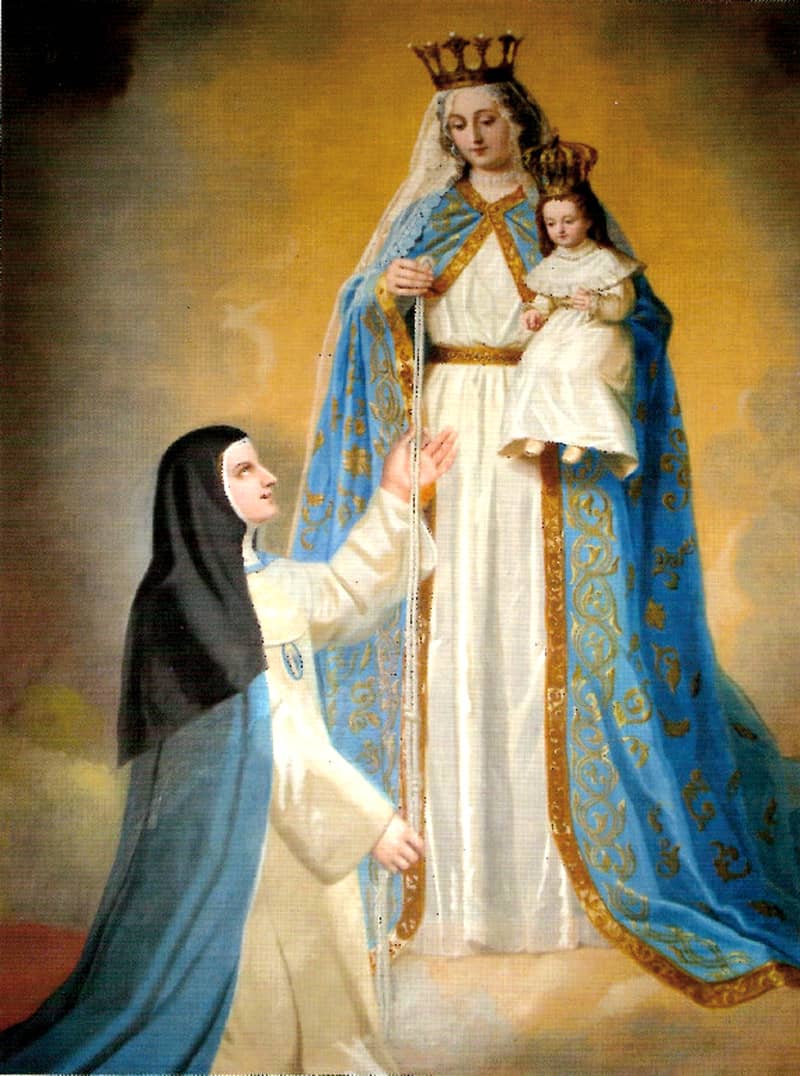 An Order for a Statue to Be Made*

Our Lady told Mother Mariana, “It is the wish of my Most Holy Son that you command a statue of me to be made, just as you see me now… In my right hand, place the crosier and the keys to the cloister as a sign of my proprietorship and authority. In my left arm, place my Divine Child.

“This very day, …you should go to the Bishop and tell him that I have asked you to have my image sculpted and be placed at the head of my convent… He should consecrate my statue with holy oil and give it the name of Mary of Good Success. On this solemn occasion, he himself should place the keys of the cloister, together with the crosier, in the right hand of my Statue.”

The humble religious responded to the Queen of Heaven: “Beautiful Lady and beloved Mother of my soul, this insignificant ant, who enjoys your presence, cannot describe to any artist your magnificent features, your incomparable beauty, and your stature. It would be necessary for one of the three Archangels, who wait upon you as nobles of your court, to come and sculpt the holy statue for the work to bear your resemblance. I do not have words to describe it, nor has any earthly artist – however great his talent – the capacity to make the divine work that you request of me.”

To this Our Lady replied: “Do not let this worry you, beloved daughter. I will see to the perfection of this work... Call my beloved son, Francisco del Castillo, who knows this art well, and give him a succinct description of my features, exactly as you see me today... As for my height, take the cord from around your waist and measure me.”

Mother Mariana took off her cord, and with humble restraint, replied: “Queen of Heaven and beloved Mother, here is the cord to measure you. But who will hold it to your beautiful forehead, adorned with that magnificent and glowing crown with which the Holy Trinity crowned you as Daughter, Mother, and Spouse, making you Queen of Heaven, Earth, and Hell? I dare not, nor would my small stature permit me to reach high enough to measure you.” 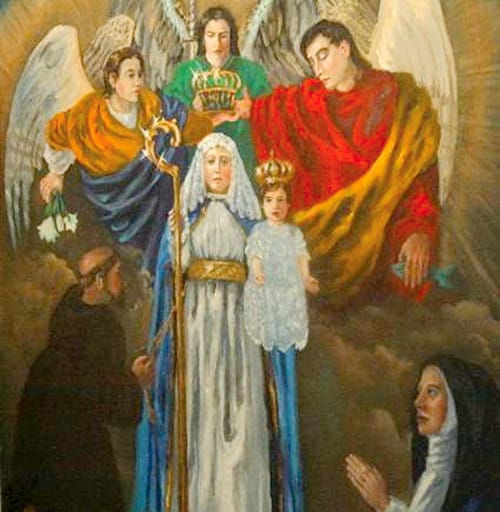 The Blessed Virgin responded with the goodness proper to a mother, “Beloved daughter, place one of the ends of your cord into my hand and I will hold it to my forehead, while you hold the other end to my right foot.”

The celestial Queen then took one end of the cord from the hands of her favored daughter and raised it to her beautiful forehead, while Mother Mariana placed the other end at the tip of her right foot.

In order for the Blessed Virgin to be able to hold the end of the cord offered by Mother Mariana to her forehead, the three Archangels, Michael, Gabriel, and Raphael, raised the royal crown over the head of their Queen, replacing it reverently after the measurement was taken...

Since the cord of Mother Mariana was a little short, it stretched miraculously, as if it were elastic, until it reached Mary’s exact height.

Looking up, Mother Mariana saw that the Divine Child was standing and holding the end of the cord which touched the forehead of His Blessed Mother. (...). Then, extending His small, gracious hand, He handed the cord to Mother Mariana, saying: “My beloved spouse, here you have the measurement of the height of My Most Holy Mother that you desired. Conserve it reverently (…).”

Mother Mariana de Jesus guarded this cord thenceforth with great reverence, always carrying it with her in one of her pockets as a precious relic, and it is preserved today in the Convent of the Immaculate Conception.

Mother Mariana immediately went to her spiritual director, the holy Franciscan Friar Francisco Anguita, to ask his counsel. After prayer and meditation, he attested to the truth of the Apparitions and ordered her to go to the Bishop to request that the statue of Our Lady of Good Success be made.

The Statue is Miraculously Completed

After the Bishop had given his approval for the statue to be made, Mother Mariana sent for Francisco del Castillo, as Our Lady had requested. He was a sculptor of talent and, more importantly, a man of great virtue; who loved the Queen of Heaven and fasted every Saturday in her honor. He called to the convent two days later. Considering himself very fortunate, he graciously accepted the commitment and left Quito immediately to search for a special wood for the statue. He returned on September 15, ready to begin his work, and received permission to work in the upper choir of the convent. As he sculpted the holy statue, he seemed a man transformed, and was often found working with tears streaming from his eyes. The Bishop himself visited from time to time to see how the work was progressing, and always, he would leave quite moved.

At the end of September, Mother Mariana called the Marquesa Maria de Yolanda, who agreed to having the gold Crosier made in Spain by her own family. Learning then of the Abbess’s cord which had measured the height of Our Lady of Good Success, the Marquesa asked the favor of seeing it. As she received it into her hands, and was just giving it back, her left arm, inert for many days from a severe fall, was suddenly cured.

As the work neared completion, the sculptor decided to travel to Europe to find the best paints for the final coat on the faces. He promised to return by January 16, 1611, in order to finish the project. 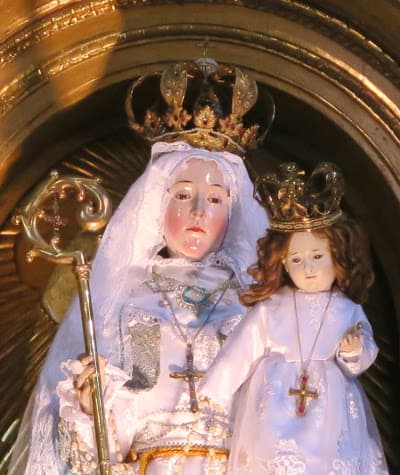 On the night before his return, …while Mother Mariana was making her customary prayer alone in the sanctuary, the church was illuminated with celestial lights… The Archangels, Michael, Gabriel and Raphael, appeared with the Queen of Heaven… Then St. Francis also appeared, and accompanied by the three Archangels, he approached the statue, and in an instant they transformed it. He took his white cord and wrapped it around the waist of the holy statue. As the heavenly choir sang the Salve Sancta Parens, the Queen of Angels, amid this great joy, approached the statue and entered into it. At that moment the holy statue took on life, and she intoned the Magnificat with the celestial choir. It was 3 A.M., and the heavenly music awoke the sleeping sisters, who then came to the choir. Seeing the brilliant light which overshadowed the statue, and upon witnessing its miraculous transformation, they gasped with joy.

When Señor Francisco del Castillo returned to the Convent, Mother Mariana and the Founding Mothers, without telling him anything, brought him into the cloister. Arriving at the choir, he looked at the statue in astonishment, and exclaimed with great emotion: “Mothers, what has happened? This magnificent statue is not my work! I cannot express what my heart feels! This is an angelic work, for a work such as this, made of mere clay, could not be made on this earth by any human hands. No sculptor, no matter how skilled he might be, could ever imitate such perfection and unique beauty.”

He fell to the feet of the holy statue, his heart overflowing with sentiments of faith and piety, while a flood of tears poured from his eyes. Upon rising, he asked for paper and ink so that he might draw up a written testimony swearing that this blessed statue was not his work, but that of the Angels. The truth of this miracle was also sworn to by the Bishop, who had been closely following the work, and was astounded at the miraculous transformation.

*This is a compilation from various internet sources of the story on the origin of the Statue in Quito, Ecuador, of Our Lady of Good Success.