The communion of Saints 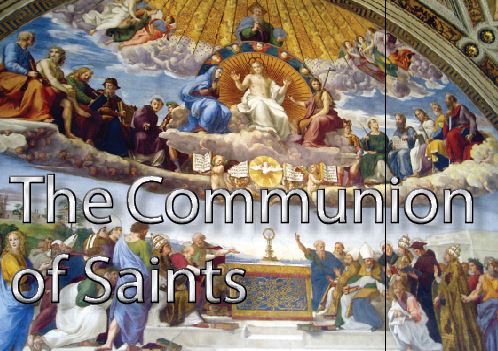 Since God creates the soul together with its embryonic body, the complete human being constitutes a union of body and soul. That is why at the end of the world every soul will regain the body from which it was separated at death. Only two human bodies (if we except those of Enoch and Elijah) already partake of glory in heaven; namely, the holy and glorified bodies of Jesus and His mother Mary. All others will be resurrected on the day of the Parousia [Greek for the second coming of Christ].

Death, being the consequence of life on earth and lasting until the Final Judgment and the Resurrection of the Body, is a state arousing both wonder and dread. Thus from the moment of conception, through a life on earth that lasts some seventy or eighty years, we gain for ourselves an eternity of unimaginable happiness or anguish. Just as the period of a man’s life on earth is real, being affirmed through the senses, reason, consciousness, experience, and all the available tools of science, so too is the period after death real, albeit shrouded in a mystery, a veil that only faith can penetrate.

Belief in life after death has accompanied mankind since time out of mind. The most ancient traces of civilization attest to a cult of the dead. In the Second Book of Maccabees this belief is already well established. We read there that after his victorious battle, the general Judas Maccabeus “took up a collection, man by man, to the amount of two thousand drachmas of silver, and sent it to Jerusalem to provide for a sin offering. In doing this he acted very well and honorably, taking account of the resurrection. For if he were not expecting that those who had fallen would rise again, it would have been superfluous and foolish to pray for the dead. But if he was looking to the splendid reward that is laid up for those who fall asleep in godliness, it was a holy and pious thought” (2 Macc 12: 43-45).

Already here, in the Old Testament, we discover the truths of our Faith; namely, that we live on after death, that we are answerable for our deeds on earth, that the prayer and offerings of those living on earth help the poor souls to atone for their sins, and that this concern for the punishment for their sins is a holy and pious thing. Even more instructive are Jesus’ own words concerning life and death in the New Testament, notably His description of the Last Judgment (Mt 25: 31-46) and His parable of the rich man and Lazarus (Lk 16: 19-31).

The old aphorism captures this truth: “As you shall live, so shall you die; as you die, so shall you enjoy eternity.” After a departed soul appeared to St. Faustina with news that it had now passed to heaven from purgatory, she noted in her diary: “I understood how closely the three stages of a soul’s life on earth, in purgatory and in heaven” (Diary, 594). In the Credo we profess belief in the “communion of saints.” In doing so, we are not just talking about those who have been raised to the altar. It also meant the real, enduring bond that unites those living on earth with those who are already in heaven and those who, though saved, are preparing themselves for glory in heaven. These last are the souls who find themselves in purgatory.

What is purgatory? It is not a place, but a state of being after death when the soul comes face to face with Supreme Holiness, Perfection, and Love. The soul has come to the full realization that it stands with all its imperfections, sinfulness, and poverty before God Himself. The soul pronounces judgment on itself, desiring to find that dignity and innocence which it has lost and now seeks to regain, so that nothing may separate it from that Fire of All-Powerful Love which is God – that Conflagration before which the entire cosmos is but a paltry speck of dust.

It is the soul itself that decides what path it must take. It decides what it must do in order to stand worthily before that Supreme Love which it had so spurned while living on earth. For some, the process of purification will be long, for others less long, depending on the evil it committed; but in each case the process will be painful. Justice must be satisfied. Our evil deeds follow us, for we leave behind on earth those whom we have injured, scandalized, cheated, or failed to repay for the good they have done.

The poor souls in purgatory have but one consolation and happiness: the knowledge that God has forgiven them through the redemptive sacrifice of His beloved Son, Jesus Christ. They are now certain of eternal salvation. They no longer stand in fear of hell. They will sin no longer; but the evil they have committed must be atoned for and put to rights. The poor souls cannot help themselves; and yet they suffer terribly. Their agonies spring in the first place from their insatiable yearning for God who revealed Himself to them at their judgment after death. Their suffering also springs from remorse for sin: sorrow for neglecting their duties, for squandering graces, for ignoring the voice of their conscience, for passing up occasions to do good. There is also the appalling awareness that the evil they committed (bad example shown, neglecting to raise children in the faith, the corruption of youth) continues to work its destruction on earth.

Regardless of what we may think of the suffering attending it, purgatory is a great manifestation of God’s mercy. Even the worst sinner, experiencing a moment of sorrow and calling on God’s name, can, after passing through purgatory, attain the eternal happiness of seeing God. In the light of the doctrine of the communion of saints, purgatory has its rightful place of honor. On the one hand, it prepares those souls who will be worthy of heaven. On the other, it represents for the living a reminder for constant prayerful remembrance of the dead. The poor souls yearn for God, but Christ also yearns for those for whom He died. He desires to clasp them to His bosom in eternity. Those who assist the poor souls in shortening their sufferings and anticipation of heaven earn an enormous debt of gratitude from those souls and our Savior Himself. This is what Judas Maccabeus believed when he prayed and made offerings on behalf of his slain soldiers. Without engaging the prayers and sacrifices of all the souls in purgatory, the communion of saints would be incomplete. We pray to the saints in heaven for help; the souls in purgatory pray for our help, and when they attain salvation, they pray for us. This is how love is to be perpetuated in the heavenly kingdom.

The best way we can help our dead is by offering up Masses and receiving Holy Communion for their intention. After this come prayers, especially the Stations of the Cross, indulgences, acts of forgiveness for the hurt caused us, and every expression of kind remembrance; e.g. speaking well of them when others criticize them. All this is of far more importance than ornamental gravestones, flowers, and candles.

Since apostolic times the Church has always attached great importance to religious services for the dead souls. Throughout the history of the Church, God has granted many saints a special sensitivity to their needs. Some of these saints have received the gift of communing with the dead and even assuming part of their sufferings, so as to hasten their way to heaven. Among the many intercessors for the poor souls, the following might be mentioned: St. Catherine of Genoa, St. Francis de Sales, Bl. Stanislaw Papczynski, St. Faustina; and among the more recent ones: Sister Lucia of Fatima and Maria Simma of Austria (d. 2004), who devoted her whole life to the suffering souls. In the latter’s notes we find the following reflection: “There are as many kinds of purgatory as there are souls... No soul would return from purgatory to live on earth as before, in the darkness we live in, for that soul has knowledge which exceeds our comprehension. The soul desires purgatory, the process of purification, as one desires to burn the dross from gold... God has revealed Himself to that soul in such radiant, dazzling beauty and purity that no power could induce it to appear before God with even the slightest stain defiling it. Only the pure, perfect soul dares to stand before the Eternal Light and Divine Perfection and gaze on the face of God.”

Reprinted with the kind permission of Love One Another Magazine