Adapted from the writings of Louis Even

Over the past centuries, many victories have been obtained through the recitation of the Rosary. (See page 26.) However, the most famous victory of the Rosary, and considered the most important, was the Battle of Lepanto, near Greece, on October 7, 1571. In order to have a better understanding of the significance of this battle and victory, a brief sketch of the meteoric rise and spread of Islam may be helpful.

Quickly after the creation of Islam in 622, Mohammed, as Allah’s appointed prophet, instilled the spirit of “Paradise in the shadow of the swords”. Most of what is known today as the Middle East and all of North Africa were conquered in less than fifty years. Then, during the summer of 711 Tarik with 7,000 Berbers or Moors crossed the strait of Gibraltar and then on land quickly dominated most of present-day Portugal, all of Spain, before crossing the Pyrenees unto France.

It was not until the year 732, in an attempted siege on Gaul and Bordeaux, while advancing towards the Loire, that they were finally confronted by a courageous and deeply Christian leader, Charles Martel. He and his followers had prepared themselves for this battle with prayer, Holy Mass and Communion, and recourse to the Blessed Mother. The soldiers under Martel were able to push the enemy back at the hills of Poitou, and it was this victory, which finally and definitively stopped the Moslem’s invasion of Western Europe.

So, for seven centuries Islam had to content itself with its conquests. The Christians, on the other hand, wanting to take back the Holy Land from Moslem domination, began organizing Crusades. And though there were many successes, there were still far too many defeats. It was not until 1108, with the liberation of Zaragoza, that the “Reconquista”, or, re-conquest began. But it took until 1492, with the freeing of Granada, a city which the Moors had held for 780 years, that Spain was finally rid of the invaders.

Around this same time, in 1453, Byzantium in the East, which had always stood so courageously and so strong against Turkish Moslem attacks, was being besieged, both by land and by sea, by Mohammed II. He did defeat the Christians in what was a daunting and bloody battle. Thousands of Christians were killed, including the emperor himself. Those who did survive, men, women and children, were sold into slavery. This capture of Constantinople was a rough blow for all of Christendom. Having taken hold of Bulgaria, Bosnia, Hungary, the Turks settled themselves in, and remained as conquerors for two long centuries. 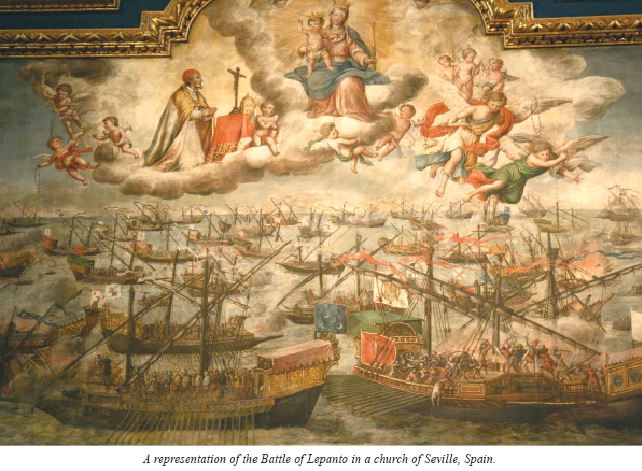 The Battle of Lepanto

1571 was the sixth and last year of the fruitful pontificate of Pope St. Pius V. Up until then, he had tried in vain to persuade the Christian governments of Europe to join together in a Holy League. Christianity was weakened by the divisions among the Christian nations: from the Renaissance, to the Schism between East and West, the threat of Protestantism and the rivalries between nations. There were also the trading interests; the Turkish fleets reigned over the entire Ionian Sea, sailing freely on the remainder of the Mediterranean Sea, with only the king of France, Francis I, enjoying full trading privileges, having signed a pact with the Sultan. For him, business was more important than religion.

At last, King Philip II of Spain, who was also king of Austria, responded favorably to the pleadings of Pope St. Pius V and joined the papal fleet. He was soon followed by the Dukes of Venice, Genoa, Lucca, Savoy, Parma, Ferrara and Urbino. The Pope asked Philip II to appoint 24 year old, Don Juan of Austria as Commander-in-Chief of the expedition. The choice was a good one; Don Juan was the son of Emperor Charles V and though he was young, he was a brave soldier, a good Christian and was Admiral of the Spanish Fleet for the past four years. The king assigned as first mate to Don Juan, Luis de Requesens, a vice-admiral with many years experience in navigation.

After saying Holy Mass, Cardinal Granvelle, viceroy of Naples and prince of the Church, presented Don Juan with the Admiral’s truncheon and the banner of the Crusades. This banner was of blue damask and emblazoned with the figure of Christ, crucified. At Christ’s feet were the four coat-of-arms: Venice, Pope St. Pius V, King Philip, Don Juan of Austria. Then, all throughout Christendom, the Pope asked the people to pray Our Lady’s Rosary, to obtain victory in this great undertaking.

What most historians also fail to mention, is that Don Juan also received a picture of Our Lady of Guadalupe which had been touched to the tilma of Juan Diego of Mexico, on which had miraculously appeared (only 40 years before) an image of the Blessed Virgin Mary. This picture had been brought from the New World and given to King Philip II. The king, in turn, gave it to Don Juan so that Our Lady would protect him and help the Holy League during the upcoming battle. Thus we learn, that the Virgin, so dear to our own hearts here in America, Our Lady of Guadalupe, Empress of the Americas, had a part in the memorable victory of Lepanto.

Lepanto was a city on the west coast of Greece and had been occupied by the Turks since 1499. The fleet of the Holy League reached the Bay of Lepanto on Sunday morning, October 7. Don Juan ordered a green banner displayed, sign to all to prepare for battle. The Christians were outnumbered by the Turkish fleets and some of Don Juan’s admirals desired a council of war but Don Juan believed that there was no longer any time for talk, it was time to fight.

As the battle got under way, the commander-in-chief, young Admiral Don Juan, now in his golden armor, went by frigate from ship to ship, encouraging his men. He carried with him a large crucifix and yelled out to them, “Brave men, now is the time you have prepared for! Humble the enemy, win this holy fight! Live or die, but be conquerors! If you should die, Heaven will be your reward!”

The Turks advanced and the Christians fought bravely. They were inspired by their leader, seeing him kneeling at the prow of his ship, invoking in a loud voice God’s blessings on the Christians in arms. The battle was long, it lasted well into the late afternoon, and many lost their lives, but when the dead body of Ali Pasha, commander-in-chief of the Ottoman naval forces, was dragged before Admiral Don Juan, a great shout went up among all the remaining Christian fleets and they victoriously hoisted the banner of Christ, Crucified. The enemy, seized with panic, took to flight — the battle was over.

Feast of Our Lady of the Rosary

Hearing the news of this victory, Venice celebrated with great joy! In Rome, Pope St. Pius V, praised Don Juan saying, “Fuit homo missus a Deo!” (This is a man sent from God!). Then he formally acknowledged that the victory truly belonged to the Blessed Virgin, so as a token of gratitude, the Pope instituted the feast of Our Lady of Victories, and declared that the entire Church would celebrate this feast every year, on the 7th day of October, in commemoration of the victory. Pope Gregory XIII, imediate successor of Pope St. Pius V, gave the more proper title, as we know it today, of Our Lady of the Rosary, because of his predecessor’s request of all the faithful, individuals and families, to “pray the Rosary to implore the victory of the Holy League against the forces of Islam.”