The Bankers are the Pharisees of today

Here is the homily given on Sunday, September 2, 2012, by the Most. Rev. Louis Nzala Kianza, Bishop of the diocese of Popokabaka, in the Democratic Republic of the Congo, at St. Michael’s parish Church in Rougemont, Quebec, on the occasion of the annual international Congress of the Pilgrims of St. Michael. Bishop Nzala was one of the four Bishops who attended our week of study and Congress this September:

Very soon this Week of Study and Congress will come to an end; we will each of us pack our bags and return to our homes. Before we do, I would like that we all ask ourselves this one question: “What shall we do with what we have learned here?” Yes, there is no doubt that we shall remember what we have learned here this week, we have all done a great job, there is no denying that. Every class was well taught, the atmosphere was wonderful, and we were all enlightened with the truth of Social Credit. Because of all this, we are all very happy and we shall return to our homes contented!

Nevertheless, my sisters and brothers, I would like that we each ask ourselves these following question: “Is it sufficient to only be content? Do you think that, after some time, the memory of all that we have lived here will only become a blur? And this light of Social Credit, of which we are so content – and with reason – if we do not make any efforts to do something with it before the humdrum routine of our everyday lives once again takes us over, will it only become just another document to be filed away somewhere? Is this message not so very important or necessary to us that we shouldn’t, at all cost, ensure that it not be forgotten or neglected?”

Without hesitation, I think that the very first thing that we all need to do, is to return thanks to God. We need to tell ourselves that, “Yes, we went over there (to Canada), and we met Christ! Yes, Christ was with us, He is with us, and He gave us His message!” It is this message which He gave us that points out to us the line of action to be followed...and what exactly is this message? You and I together have just heard the words of the Psalmist, “Oh, that today you would hear his voice: Do not harden your hearts...(Psalm 95: 7,8) We also just heard this beautiful passage of Mark in today’s Gospel (7:1-8,14-15,21-23), which I know that you all paid attention to, and have well retained, but it is worth repeating, for, as you know it is said, that the “mother” of all sciences is repetition. So, let us go over it once again:

“The Pharisees and some of the scribes gathered around Him when they had come from Jerusalem, and had seen that some of His disciples were eating their bread with impure hands, that is, unwashed. (For the Pharisees and all the Jews do not eat unless they carefully wash their hands, thus observing the traditions of the elders; and when they come from the market place, they do not eat unless they cleanse themselves; and there are many other things which they have received in order to observe, such as the washing of cups and pitchers and copper pots.) The Pharisees and the scribes asked Him, “Why do Your disciples not walk according to the tradition of the elders, but eat their bread with impure hands?”

However, Jesus knew the Pharisees very well. We know that He was continuously on His guard with the Pharisees in the Gospel, so often He was obliged to defend Himself against them. This time He gets right to the point; of course it is right to wash the hands, this is a fine tradition for them, but it is not just these traditions that should be followed. Much more important than these are the laws of God. What He is telling them is to wash their hearts, to cleanse their interior. This is what must be made pure, this is what must be taken care of. Our Lord then goes on to say to them, “Rightly did Isaiah prophesy of you hypocrites, as it is written, “This people honors Me with their lips, but their heart is far away from Me...”

When we follow closely what always seems to take place between Jesus and the Scribes and Pharisees, we begin to notice that it always comes back to the same thing: He reproaches them for their “falseness”, their lack of Truth...Jesus can NEVER support what is not true for He is the Way, the Truth, and the Life. The truth can NOT support lies.

This is why Jesus is not afraid to tell the Pharisees that they are hypocrites...and did you know that even today, to be called a Pharisee is not a noble thing, that it is an insult? A Pharisee was not of itself a bad thing in the religious tradition of a Pharisee, they were well respected men and considered honorable. But since Jesus’ day a Pharisee has become synonymous with “Hypocrite”, “For from within, out of the heart of men, proceed the evil thoughts, fornications, thefts, murders, adulteries”, ...and Jesus goes on to rebuke them...

Dear brothers and sisters, this message that the Lord brings to us today in this Gospel, should make us reflect, in more ways than one. When we think about all that we have learned this week we can make a comparison, realizing that the Pharisees of our day are the Bankers!

They are truly Pharisees, presenting to us schemes that appear pleasant and fantastic. They give the illusion of bringing “life”, lending money so that great projects can be realized, so that so many good things can be accomplished, but what most don’t know is that, behind that money, it is death that awaits, not life. You will not be able to repay, you will be buried in debt, you will begin to die of hunger. Behind that money they will always be saying, “This is good what we are doing for you.” And you will be caught, hook, line and sinker, like a famished fish.

My dear brothers and sisters, remember that the first encyclical of Pope Benedict XVI was Deus Caritas Est, God is love. It was very quickly followed by his next encyclical: Caritas in Veritate, Charity in Truth. This is because, so often we perform acts which we believe to be charitable, but is it truly in charity and in truth that these actions are performed. More often than not these actions are done in “falseness”, in a hypocritical way; yet we see differently.

You have not forgotten what we are still living now (in Africa). The huge campaign that was launched for the promotion of condoms: “The world is threatened by the AIDS epidemic, we need to save the world! The miracle solution is condoms!” Even Pope Benedict XVI was dragged into this, and he dared to speak out in opposition, (in March 2011, at the time of his trip to Cameroon and Angola) and we all know what that cost him: a propaganda which broke out against him. There was even the Belgian Deputy Prime Minister who asked that the Pope be brought to justice. Millions of dollars were poured out to promote condoms, but we know very well that this was not done in order to save lives. No, what really counts for them is to sell their product… 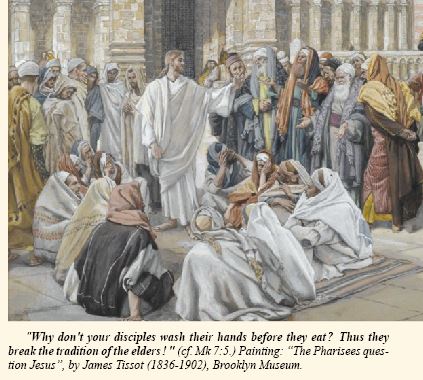 Today, when we look at the new Pharisees of modern times, seeing all that they dish out, considering the example of the Congo, it can be thought that they are being very “humanitarian”! One will say, for example, that the United Nations Organization (UN) is in the Congo to save the people, to prevent the war!But, my God, the truth is that millions of dollars are piled up in debt towards the people of the Congo just to keep the UNO in the Congo! And yet, when people fight, the soldiers of the UNO do not even intervene, they do nothing to prevent the fighting. These same soldiers accept that other soldiers abuse the Congolese population in the cruelest ways. Raping women is already serious enough, it is inadmissible, intolerable; but worse than that, is that soldiers who are afflicted with the AIDS virus, are sent out on a “mission” to systematically rape the most women possible: therefore, attacking the very future of these people.

You can see with what cynicism they claim to do good, yet, this is not true, this is false charity! This is pharisaic, it is to be an agent of death; they are all agents of death…

We too though, are Pharisees of modern times, we each have a Pharisee that sleeps within us. In each one of us there is also a goldsmith (in reference to the text of Louis Even that explains how the goldsmith became a banker). We need to look more closely at ourselves, at the actions we perform, being sure that they are actions performed in truth. That the actions are truly performed in charity, and not with selfish motives.

When we do look more closely at ourselves, each one of us, we see that we are not far from being Pharisees. After all, the Pharisees, the large financial ones, the bankers, do not act alone, they act with us. They act with the collusion of the politicians, with the collusion even of those uninformed people who accept that his/her children engage in wars, believing it is a good thing, for the good of the people. We must be very careful of these coalitions. Each one of us, in one way or another, is guilty. Look at our cell phones, our computers: we carry the blood of the victims of the war in the Congo (DRC). We carry the blood of all those women who were violated and died. We carry the blood of all those who later die because of AIDS. All this because of coltan, that source of tantalum used in electronic devices such as cell phones and laptop computers. This is the true reason for the war in Congo, so that they can continue to exploit the people of Congo, continue to balkanize the people, weakening them until they are no longer able to exist as a State.

My dear brothers and sisters, we will ask our Lord to helps us, and that Social Credit will triumph. But even there, we must be very careful: Social Credit is not a magic potion, it is not a miracle drug; Social Credit needs to be applied by man. Therefore, this man who applies it, must apply it in truth. If it is not done in truth, then it could even make things worse. We will pray for the Pilgrims of St. Michael; that the Lord will give them the strength and courage to continue their battle, that they may become invaluable instruments, the spearheads used by the Church, for justice, for truth, for love.

We will pray for all those who are victims of the bankers, as much here in Occident, as in our own country Africa.

We will pray for our children who will be receiving the Sacrament of Confirmation today. That this sacrament may confirm them as Christians. That they may continue to be educated in a Christian environment enabling them to develop to their full potential as Christians, so that later they may be true soldiers of justice, true soldiers of the advent of the reign of God among us. Amen. 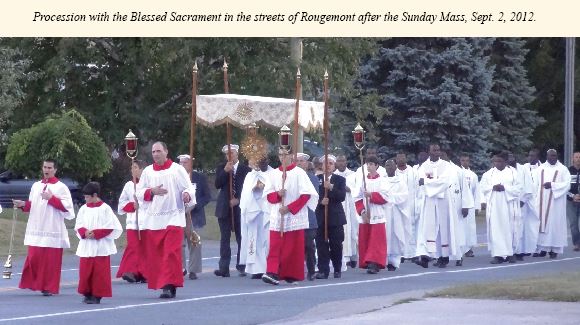