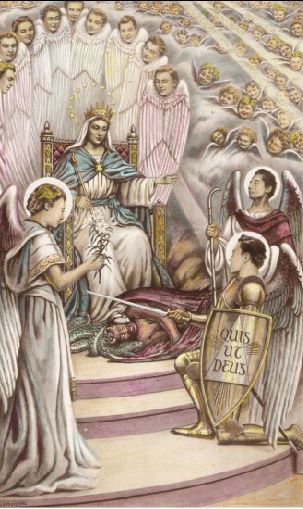 Our Lady with the Archangels Gabriel, Michael, and Raphael

On January 13, 1864, a soul (Father Louis Cestac, who died in 1868) accustomed to the favors of the most Holy Virgin, was suddenly struck as if with a ray of divine clarity. He believed to have seen demons spread out over the earth, causing unbelievable ravage. At the same time, he had an elevation towards the Holy Virgin. This good mother would have told him that as a matter of fact, the time had come to pray to the Queen of the angels, and to ask Her to send the holy legions to combat and overthrow the powers of hell.

"My Mother," said this soul, "you who are so good, could You not send them without our having to ask?"

"No," replied the Holy Virgin. "Prayer is a condition set by God Himself in order to obtain graces."

"Well then! my mother," replied the soul, "would you teach me Yourself how we must pray to You?" And he received from the most Holy Virgin the prayer: "August Queen":

August Queen of the Heavens, heavenly sovereign of the Angels, Thou who from the beginning received from God the power and the mission to crush the head of Satan, we humbly beseech Thee to send Your holy Legions, so that under Thy command and through Thy power, they may pursue the demons and combat them everywhere, suppress their boldness, and drive them back into the abyss. Who is like God? O good and tender Mother, Thou will always be our love and hope! O Divine Mother, send Thy Holy Angels to defend me and to drive far away from me the cruel enemy. Holy Angels and Archangels, defend us, guard us. Amen.