The Apparition of Our Lady of Pontmain 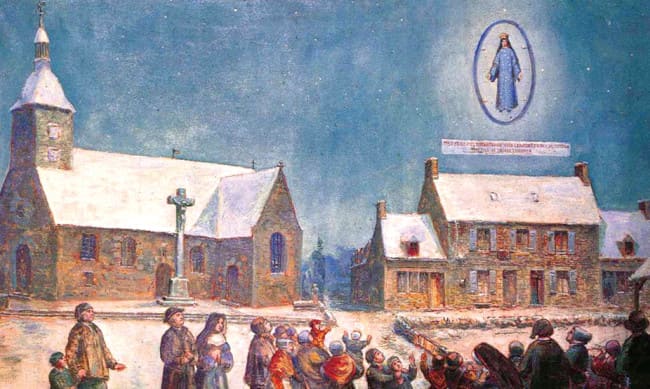 Emperor Napoleon III of France had declared war against Prussia on July 19, 1870. From the first days of the war, defeat followed defeat. By January 1871, Paris was under siege and two-thirds of the country was in the hands of the Prussians. They were advancing toward the west of France and by January 17, 1871, the Prussians were just across the river from Laval, the city next to Mayenne.

In the early evening of January 17, 1871—just over 150 years ago—Pontmain, a hamlet of 500 inhabitants in the north of Mayenne, lay under a blanket of snow. Though the roar of cannons could be heard, the Barbedette family was busy in the barn in the middle of the small village. The two boys, Eugene and Joseph Barbedette, ages 12 and 10, were helping their father feed the horses. 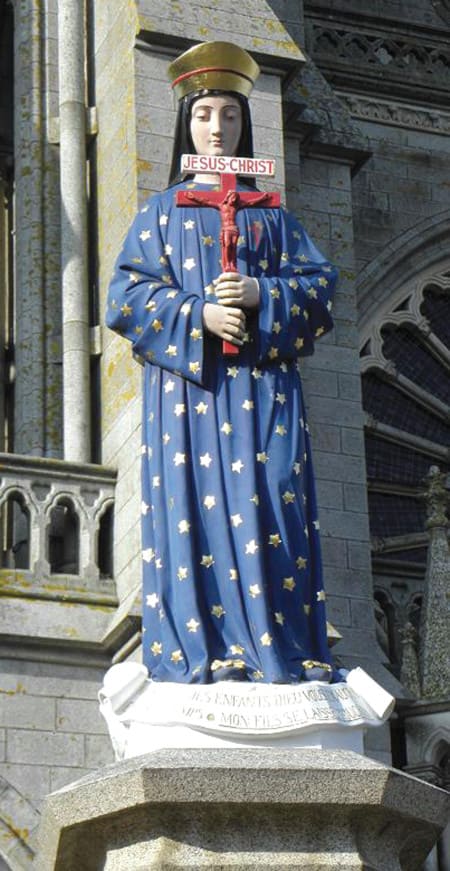 Some minutes before 6 p.m., Eugene left the barn and saw in the sky a Lady. She spread her lowered hands in a gesture of welcome and smiled at him. Joseph came along a few moments later and also saw Our Lady but the parents of the boys saw nothing. The Sisters of the school were called and they also saw nothing. However, two girls who accompanied the Sisters, Frances Richer, age 11, and Jeanne Marie Lebosse, 9, saw the beautiful Lady.

Eugene described her. Our Lady was dressed in a flowing robe of deep radiant blue studded with gold stars. The sleeves of her robe fully extended to her hands. She was wearing blue slippers, tied with golden ribbon in the shape of a rosette. Her hair was covered with a black veil thrown over her shoulders and reached down to the level of her elbows. On her head, a gold crown rose slightly to a peak. It had no ornament in front except a red band circling the centre. Her hands were extended — “like the Miraculous Medal”, but without the rays of light.

A crowd had gathered to pray as word quickly spread among the villagers of the appearance of Our Lady. From time to time, Our Lady looked sad because some of the people assembled were haughty and rowdy. But she resumed her smile, especially with the recitation of the Rosary and the singing of hymns led by the parish priest, Father Guerin, and the two Sisters. As the assembled people were praying the Rosary, stars gathered two by two below Our Lady’s feet as if representing the Hail Marys of the Most Holy Rosary. Then a white banner, about a yard wide, unrolled beneath her feet and formed a perfect rectangle. Here she revealed a message:

“OH! DO PRAY MY CHILDREN, GOD WILL ANSWER YOU VERY SOON. MY SON ALLOWS HIMSELF TO BE MOVED”

After some time, she raised her hands to the height of her shoulders, arms out and bent slightly backwards with her elbows close to her body. A large red cross with the figure of the crucified Christ appeared in the hands of the Blessed Virgin. A large white veil began to cover the figure of the Virgin, slowly rising to her face and she gave her last smile to the children. As the night prayers came to a close, the apparition ended at about 9:00 p.m. It had lasted about three hours.

In the meantime, late that same night, General Von Schmidt of the Prussian Army received orders not to advance to Pontmain. The invasion of the Catholic West did not occur! The next morning, General Schmidt was reported to have said: “We could not go further. Yonder, in the direction of Brittany, there was an invisible ‘Madonna’ barring the way.”

On January 23, 1871, the long-hoped for Armistice was signed. The promise made by Our Lady that God would soon grant their request had been fulfilled. Soon all thirty-eight conscripted men and boys of Pontmain returned home unscathed.

On the Feast of the Purification, February 2, 1872, the Most Rev. Wicart, Bishop of Laval, issued a pastoral letter giving a canonical judgment on the Apparition. Thus, the veneration of Our Lady of Pontmain, also known as Our Lady of Hope, was given official Church recognition and approval. A basilica was built and consecrated on October 15, 1900.