The Angel of Fatima 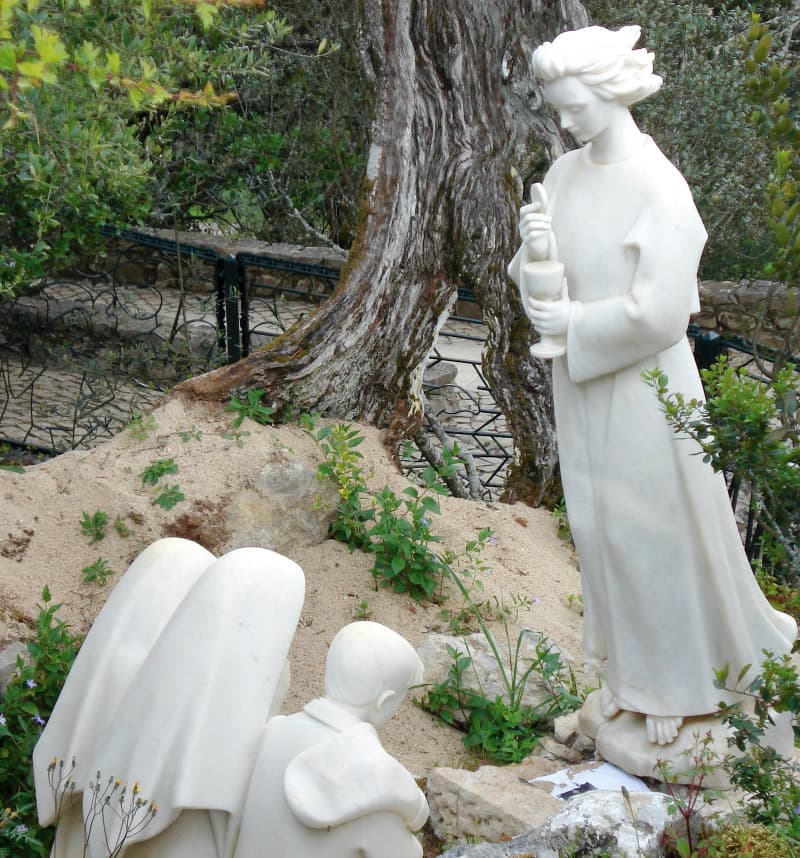 In the Spring of 1916, an angel from Heaven visited three small children in Fatima, Portugal; Jacinta Marto and and her brother Francisco, 7 and 9 years old, and their cousin, Lucia Santos, 10. The visitation of the angel dramatically changed the course of the lives of these three young shepherds, and prepared them for this great mission; that of proclaiming the message of Our Lady, Queen of Heaven and Earth, to the whole world. For it was in the following year, 1917, that the Virgin Mother of God appeared to these same three children with a warning and a request for prayer, especially the Rosary. The message of Our Lady at Fatima would greatly affect the people of the 20th Century. The following account* of what took place in that Spring of 1916 is written by Lucia, in obedience to the request of her Bishop, Dom José Alves Correia da Silva (1872-1957):

“[W]e set out with our sheep for some land that my parents owned…called Chousa Velha. Soon after our arrival, about midmorning, a fine drizzle began to fall, so fine that it seemed like mist. We went up the hillside, followed by our flocks, looking for an overhanging boulder where we could take shelter. Thus it was for the first time that we entered this blessed hollow among the rocks. It stood in the middle of an olive grove belonging to my godfather Anastácio. From there, you could see the little village where I was born, my parents’ home, and the hamlets of Casa Velha and Eira da Pedra. The olive grove, owned by several people, extended to within the confines of the hamlets themselves. We spent the day there among the rocks, in spite of the fact that the rain was over and the sun was shining bright and clear. We ate our lunch and said our Rosary… Our prayer finished, we started to play ‘pebbles’!

We had enjoyed the game for a few moments only, when a strong wind began to shake the trees. We looked up, startled, to see what was happening, for the day was unusually calm. Then we saw coming towards us, above the olive trees, the figure… As it drew closer, we were able to distinguish its features. It was a young man, about fourteen or fifteen years old, whiter than snow, transparent as crystal when the sun shines through it, and of great beauty. On reaching us, he said:

“Do not be afraid! I am the Angel of Peace. Pray with me.”

Kneeling on the ground, he bowed down until his forehead touched the ground, and made us repeat these words three times:

“My God, I believe, I adore, I hope and I love You! I ask pardon of You for those who do not believe, do not adore, do not hope and do not love You.”

Then rising, he said:

“Pray thus. The Hearts of Jesus and Mary are attentive to the voice of your supplications.”

His words engraved themselves so deeply on our minds that we could never forget them. From then on, we used to spend long periods of time, prostrate like the Angel, repeating his words, until sometimes we fell, exhausted. I warned my companions, right away, that this must be kept secret and, thank God, they did what I wanted. 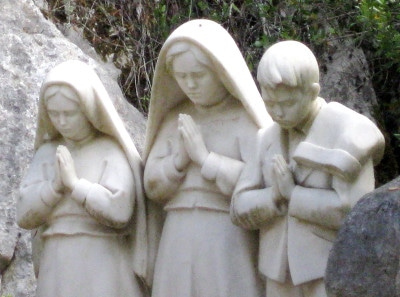 Some time passed and summer came… We were playing on the stone slabs of the well down at the bottom of the garden belonging to my parents, which we called the Arneiro… Suddenly, we saw beside us the same figure, or rather Angel, as it seemed to me.

“What are you doing?” he asked.

“Pray, pray very much! The most holy Hearts of Jesus and Mary have designs of mercy on you. Offer prayers and sacrifices constantly to the Most High.”

“How are we to make sacrifices?” I asked.

“Make of everything you can a sacrifice, and offer it to God as an act of reparation for the sins by which He is offended, and in supplication for the conversion of sinners. You will thus draw down peace upon your country. I am its Angel Guardian, the Angel of Portugal. Above all, accept and bear with submission the suffering which the Lord will send you.”

A considerable time had elapsed, when one day we went to pasture our sheep on a property belonging to my parents, which lay on the slope of the hill…a little higher up than Valinhos. It is an olive grove called Pregueira. After our lunch, we decided to go and pray in the hollow among the rocks on the opposite side of the hill. To get there, we went around the slope and had to climb over some rocks above the Pregueira. The sheep could only scramble over these rocks with great difficulty.

As soon as we arrived there, we knelt down, with our foreheads touching the ground, and began to repeat the prayer of the Angel: “My God, I believe, I adore, I hope and I love You…”, I don’t know how many times we had repeated this prayer, when an extraordinary light shone upon us. We sprang up to see what was happening, and beheld the Angel. He was holding a chalice in his left hand, with the Host suspended above it, from which some drops of blood fell into the chalice. Leaving the chalice suspended in the air, the Angel knelt down beside us and made us repeat three times:

“Most Holy Trinity, Father, Son and Holy Spirit, I adore You profoundly, and I offer You the most precious Body, Blood, Soul and Divinity of Jesus Christ, present in all the tabernacles of the world, in reparation for the outrages, sacrileges and indifference with which He Himself is offended. And, through the infinite merits of His most Sacred Heart and the Immaculate Heart of Mary, I beg of You the conversion of poor sinners.”

Then rising, he took the chalice and the Host in his hands. He gave the Sacred Host to me, and shared the Blood from the chalice between Jacinta and Francisco, saying as he did so:

‘Take and drink the Body and Blood of Jesus Christ, horribly outraged by ungrateful men! Make reparation for their crimes and console your God.’

Once again, he prostrated on the ground and repeated with us, three times more, the same prayer “Most Holy Trinity…” and then disappeared. We remained a long time in this position, repeating the same words over and over again. When at last we stood up, we noticed that it was already dark, and therefore time to return home.

—The importance of prayer for the conversion of sinners.

—The need for reparative suffering for the sins committed against the Blessed Sacrament.

—The Truths of the True Presence of Jesus in the Holy Eucharist.

Let us now meditate on this message of the Angel of Fátima, asking God to prepare our own hearts through prayer, reparation and the Holy Eucharist, especially during this Jubilee Year of Mercy. And let us not lose these awesome opportunities offered to us, during this special “time of preparation”, that our hearts may be truly ready for whatever God’s plan may be for each and every one of us in becoming missionaries of His Mercy.

*Accounts of the Angel’s Apparition reprinted from the book: Fátima In Lucia’s Own Words, Sr. Lucia’s Memoirs, Edited by Fr. Louis Kondor, SVD. Introduced by Dr. Joaquin M. Alonso, CMF. (†1981) and translated by the Dominican Nuns of the Perpetual Rosary.