The 90th Anniversary of the Apparitions of Our Lady at Fatima 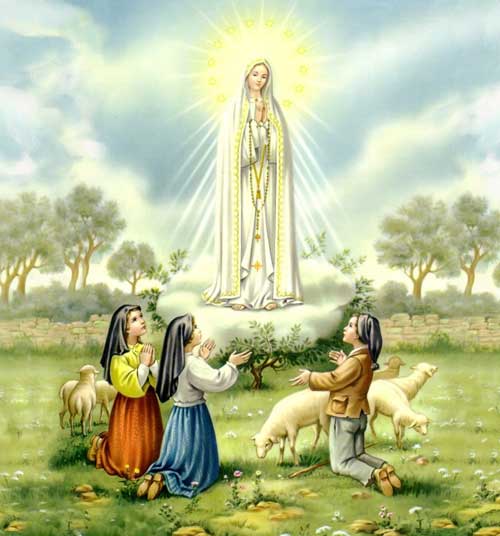 On May 13, 2007, over 500,000 faithful gathered at the shrine of Fatima, Portugal, to celebrate the 90th Anniversary of the Apparitions of the Virgin Mary to the three little shepherds: Jacinta Marto, aged 7, her brother Francisco, aged 9, and their cousin Lucia Dos Santos, aged 10. As Our Lady had predicted, the first two died very young: Jacinta in 1920 at the age of 9, and Francisco in 1919, at the age of 11. As for Lucia, the Virgin Mary had told her that she would have to stay "a little longer" on earth: she became a Carmelite nun and died at the age of 97 on January 13, 2005.

Pope Benedict XVI, who was in Brazil on that day, appointed Cardinal Angelo Sodano to represent him in Fatima for this Anniversary, and wrote to him in a special letter:

"Ninety years ago, the Heavenly Queen of Peace, in order to transmit divine help and the promise of sure hope for peace, appeared in Fatima to three astonished little shepherds, while they kept watch over their flock. Many faithful have had recourse to Her help and, in their various perils, have looked for Her protection.

"We remember well the special devotion and gratitude of John Paul II, our Predecessor of good memory, who twenty-five years ago thanked there the Virgin Mary for the miraculous sparing of his life and urged all the faithful to put into practice Her warnings and requests. Therefore, we who have already visited that shrine and, as Prefect of the Congregation for the Doctrine of Faith, have studied the message entrusted by the Blessed Virgin Mary to the shepherds, wish that you propose again to the faithful the value of the prayer of the holy Rosary as well as this message, in order that we may obtain the favors and graces which the Mother of the Redeemer Herself promised to the people devoted to Her Immaculate Heart."

On May 13, 2000, Pope John Paul II was present in Fatima to preside over the beatification of Jacinta and Francisco Marto. Here are excerpts from his homily:

"‘Father, ... to you I offer praise; for what you have hidden from the learned and the clever you have revealed to the merest children’ (Mt 11: 25). With these words, dear brothers and sisters, Jesus praises the heavenly Father for his designs; he knows that no one can come to him unless he is drawn by the Father (cf. Jn 6: 44); therefore he praises him for his plan and embraces it as a son: ‘Yes, Father, for such was your gracious will’ (Mt 11: 26). You were pleased to reveal the kingdom to the merest children.

"According to the divine plan, ‘a woman clothed with the sun’ (Rv 12: 1) came down from heaven to this earth to visit the privileged children of the Father. She speaks to them with a mother’s voice and heart: she asks them to offer themselves as victims of reparation, saying that she was ready to lead them safely to God. And behold, they see a light shining from her maternal hands which penetrates them inwardly, so that they feel immersed in God just as — they explain — a person sees himself in a mirror.

A call to conversion

"Another portent appeared in heaven; behold, a great red dragon" (Rv 12: 3). These words… make us think of the great struggle between good and evil, showing how, when man puts God aside, he cannot achieve happiness, but ends up destroying himself.

"How many victims there have been throughout the last century of the second millennium! We remember the horrors of the First and Second World Wars and the other wars in so many parts of the world, the concentration and extermination camps, the gulags, ethnic cleansings and persecutions, terrorism, kidnappings, drugs, the attacks on unborn life and the family.

"The message of Fatima is a call to conversion, alerting humanity to have nothing to do with the ‘dragon’ whose ‘tail swept down a third of the stars of heaven, and cast them to the earth’ (Rv 12: 4, which means that one third of the angels in Heaven followed Lucifer in his rebellion and fall). Man’s final goal is heaven, his true home, where the heavenly Father awaits everyone with his merciful love.

"In her motherly concern, the Blessed Virgin came here to Fatima to ask men and women ‘to stop offending God, Our Lord, who is already very offended’. It is a mother’s sorrow that compels her to speak; the destiny of her children is at stake. For this reason she asks the little shepherds: ‘Pray, pray much and make sacrifices for sinners; many souls go to hell because they have no one to pray and make sacrifices for them’."

The message of Fatima

What is the message of Fatima? Prayer, penance and conversion. In 1917, the Virgin Mary gave a secret to the three shepherds; Sister Lucia unveiled the first two parts in her memoirs in 1941, and the third part of the secret was unveiled at Fatima on May 13, 2000, on the occasion of the beatification ceremony. Here is what Sister Lucia wrote:

"The secret is made up of three distinct parts, two of which I am now going to reveal. The first part is the vision of hell.

"Our Lady showed us a great sea of fire which seemed to be under the earth. Plunged in this fire were demons and souls in human form, like transparent burning embers, all blackened or burnished bronze, floating about in the conflagration, now raised into the air by the flames that issued from within themselves together with great clouds of smoke, now falling back on every side like sparks in a huge fire, without weight or equilibrium, and amid shrieks and groans of pain and despair, which horrified us and made us tremble with fear. The demons could be distinguished by their terrifying and repulsive likeness to frightful and unknown animals, all black and transparent. This vision lasted but an instant. How can we ever be grateful enough to our kind heavenly Mother, who had already prepared us by promising, in the first Apparition, to take us to heaven. Otherwise, I think we would have died of fear and terror.

"We then looked up at Our Lady, who said to us so kindly and so sadly:

"You have seen hell where the souls of poor sinners go. To save them, God wishes to establish in the world devotion to my Immaculate Heart. If what I say to you is done, many souls will be saved and there will be peace. The war is going to end: but if people do not cease offending God, a worse one will break out during the Pontificate of Pius XI. When you see a night illumined by an unknown light, know that this is the great sign given you by God that he is about to punish the world for its crimes, by means of war, famine, and persecutions of the Church and of the Holy Father. To prevent this, I shall come to ask for the consecration of Russia to my Immaculate Heart, and the Communion of reparation on the First Saturdays. If my requests are heeded, Russia will be converted, and there will be peace; if not, she will spread her errors throughout the world, causing wars and persecutions of the Church. The good will be martyred; the Holy Father will have much to suffer; various nations will be annihilated. In the end, my Immaculate Heart will triumph. The Holy Father will consecrate Russia to me, and she shall be converted, and a period of peace will be granted to the world".

The third part of the secret

"After the two parts which I have already explained, at the left of Our Lady and a little above, we saw an Angel with a flaming sword in his left hand; flashing, it gave out flames that looked as though they would set the world on fire; but they died out in contact with the splendour that Our Lady radiated towards him from her right hand: pointing to the earth with his right hand, the Angel cried out in a loud voice: ‘Penance, Penance, Penance!’. And we saw in an immense light that is God: ‘something similar to how people appear in a mirror when they pass in front of it’ a Bishop dressed in white ‘we had the impression that it was the Holy Father’. Other bishops, priests, men and women religious going up a steep mountain, at the top of which there was a big Cross of rough-hewn trunks as of a cork-tree with the bark; before reaching there the Holy Father passed through a big city half in ruins and half trembling with halting step, afflicted with pain and sorrow, he prayed for the souls of the corpses he met on his way; having reached the top of the mountain, on his knees at the foot of the big Cross he was killed by a group of soldiers who fired bullets and arrows at him, and in the same way there died one after another the other bishops, priests, men and women religious, and various lay people of different ranks and positions. Beneath the two arms of the Cross there were two angels each with a crystal aspersorium in his hand, in which they gathered up the blood of the Martyrs and with it sprinkled the souls that were making their way to God.