The 150th anniversary of the Apparitions of Our Lady at Lourdes

on Tuesday, 01 January 2008. Posted in Apparitions

The final struggle between the Church and the Anti-Church

Here are excerpts taken from the homily given by Ivan Cardinal Dias, Prefect of the Congregation for the Evangelization of People and legate for the Holy Father, on the occasion of the beginning of the Jubilee of the 150th anniversary of the Apparitions of the Blessed Virgin Mary to St. Bernadette Soubiroux at Lourdes. The homily was delivered at the underground St. Pius X Basilica in Lourdes, France, on December 8, 2007:

As pilgrims assembled in the love of Christ, we wish to remember with gratitude and affection the apparitions which took place here in Lourdes in 1858. Together, we try to feel the palpitations of the maternal heart of our dear celestial Mom, to recall her words, and to listen to the message which she presents to us still today.

We know well the story of these apparitions. The Blessed Virgin came down from Heaven as a Mother who is worried about her sons and daughters living in sin, far from Her Son Jesus. She appeared at the grotto of Masabielle, which at the time (1858) was a swamp where pigs grazed; it is precisely at that place that She wanted a shrine to be built, to show that God’s grace and mercy must triumph over the seedy swamp of human sins.

Nearby the apparition site, the Virgin Mary had water gush forth in plenty, that pilgrims still drink and carry with much devotion all over the world, which represents the wish of our dear Mother to spread Her love and the salvation coming from Her Son throughout the world. Finally, from this blessed Grotto, the Virgin Mary launched an urgent call to all for prayer and penance, in order to obtain the conversion of the poor sinners.

The message of the Virgin today

It may be asked: what significance may the message of Our Lady of Lourdes have for us today? I would like to place these apparitions in the larger context of the permanent and ferocious fight between the forces of good and evil, that has taken place since the very beginning of the history of mankind in the Garden of Eden, and will last until the end of times.

The apparitions at Lourdes are indeed part of the long chain of apparitions of Our Lady, which began 28 years before, in 1830 on the Rue du Bac in Paris, announcing the decisive entrance of the Virgin Mary into the heart of the hostilities between Her and the devil, as it is written in the Bible, in the Books of Genesis and Revelations. The Miraculous Medal that the Virgin Mary asked to coin on this occasion showed Her with Her ams opened, from which rays of light were going forth to all sides, meaning the graces that She would distribute to the entire world. Her feet were resting on the globe, crushing the head of the serpent, the devil, showing the victory of the Virgin Mary over the Evil one and his forces. Around the image, one could read: "O Mary conceived without sin, pray for us who have recourse to Thee."

After her apparitions at Lourdes, the Holy Virgin has not ceased to manifest her great maternal concerns for the fate of mankind in her several apparitions worldwide. She has everywhere asked for prayers and penance for the conversion of sinners, for she predicted the spiritual ruin of certain nations, the sufferings that the Holy Father would face, the general weakening of the Christian faith, the difficulties of the Church, the rise of the Antichrist and of his attempts to replace God in the life of men, attempts which, despite their instant success, would nevertheless be destined to fail.

An offensive against the forces of the Evil one

Here, at Lourdes, as everywhere in the world, the Virgin Mary is weaving a enormous web of her spiritual sons and daughters in the whole world in order to launch a strong offensive against the forces of the Evil one, to lock him up and thus prepare the final victory of her divine Son, Jesus Christ.

The Virgin Mary invites us once again today to be a part of her combat legion against the forces of evil. As a sign of our participation at her offensive, she demands, among other things, the conversion of the heart, a great devotion to the Holy Eucharist, the daily recitation of the rosary, unceasing prayer without hypocrisy, the acceptance of sufferings for the salvation of the world. Those could seem to be small things, but they are powerful in the hands of God, to whom nothing is impossible. As the young David who, with a small stone and a sling, brought down the giant Goliath who came to meet him armed with a sword, a spear, and a shield (cf. 1 Sam 17,4-51), we will also, with the small beads of our rosary, be able to heroically face the assaults of our awesome adversary and defeat him. 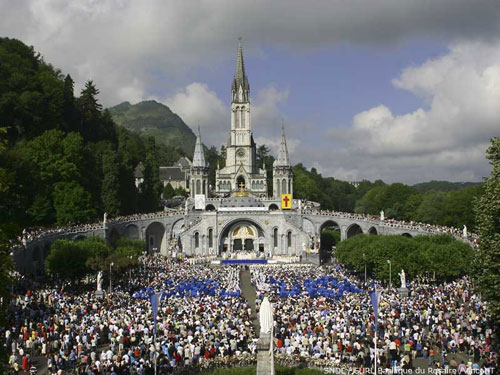 The final struggle between the Church and the Anti-Church

The struggle between God and his enemy still takes place, even more so today than at the time of Bernadette, 150 years ago. Because the world finds itself stuck in the swamp of a secularism that wishes to create a world without God; of a relativism that stifles the permanent and unchangeable values of the Gospel; and of a religious indifference that remains undisturbed regarding the higher good of the matters of God and the Church. This battle makes innumerable victims within our families and among our young people. Some months before becoming Pope John Paul II, Cardinal Karol Wojtyla said (November 9, 1976):

Mary will crush the head of the serpent

But one thing is certain: the final victory will be God’s, thanks to Mary, the Woman of the Book of Genesis and of Revelations, who will fight at the head of the army of her spiritual sons and daughters against the enemy forces of Satan and will crush the head of the serpent.

During this Jubilee Year, let us thank the Lord for all the corporal and spiritual graces granted to hundreds of thousands of pilgrims in this holy place, and through the intercession of St. Bernadette, let us pray to the Virgin Mary and ask Her to strengthen us in the spiritual battle of every day, so that we may live in its entirety our Christian faith, by practising the virtues that distinguished the Virgin Mary: fiat, magnificat ans stabat; that is to say, a dauntless faith (fiat), joy beyond measure (magnificat) and uncompomising faithfulness (stabat).

O Mary, Our Lady of Lourdes, blessed are Thou among women, and blessed is the fruit of Thy womb, Jesus. Holy Mary, Mother of God, pray for us sinners, now and at the hour of our death. Amen.