Written by Benedict XVI on Friday, 01 May 2009. Posted in Saints & Blessed 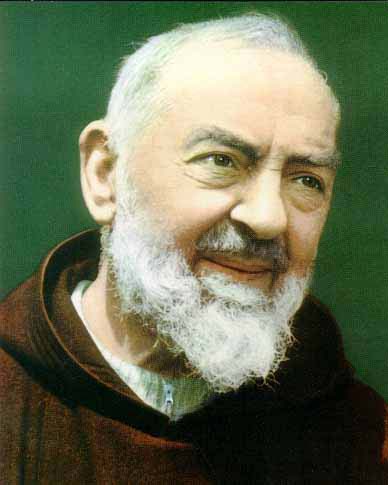 Two days after the opening of the Year of Priests, Pope Benedict XVI went to the city of San Giovanni Rotondo, in the south-east of Italy, to pay homage to the "Curé of Ars of the 20th century," St. Padre Pio of Pietrelcina, an Italian Roman Catholic Capuchin priest who remained in the monastery of San Giovanni Rotondo from 1916 to his death, on Sept. 23, 1968.

He became famous for his gift for reading consciences while hearing confessions, and for his stigmata. Just like St. John Mary Vianney, he lived with the Eucharist at the center of his life and gave tirelessly of himself in the confessional. With these two exceptional priests, Pope Benedict proposes two giants of holiness to all priests today. Here are excerpts of what the Holy Father said on that day about Padre Pio:

Some saints have lived intensely and personally this experience (the Passion) of Jesus. Padre Pio of Pietrelcina is one of them. A simple man of humble origins, "seized by Christ" (Phil. 3:12) – as the Apostle Paul writes of himself – to make of him an instrument chosen by the perennial power of his cross: power of love for souls, of forgiveness and of reconciliation, of spiritual paternity, of effective solidarity with those who suffer. The stigmata, which marked his body, united him closely to the Crucified and Risen One. A true follower of St. Francis of Assisi, he made his own, like the Poverello, the experience of the Apostle Paul which he describes in his letters: "I have been crucified with Christ and I no longer live, but Christ lives in me" (Gal 2:20).

Like all great men of God, Padre Pio had himself become prayer, soul and body. His days were a living rosary, that is, a continuous meditation and assimilation of the mysteries of Christ in spiritual union with the Virgin Mary. This explains the unusual presence within him of supernatural gifts and of human existence. And everything had its climax in the celebration of Holy Mass: there he joined himself fully to the crucified and risen Lord.

Here in the sanctuary of St. Pio of Pietrelcina, we seem to hear his own voice, which urges us to address ourselves with childlike hearts to the Blessed Virgin: "Love the Blessed Virgin and help others love her."

To the intercession of Our Lady and of St. Pio of Pietrelcina I would like to entrust especially this Priestly Year, which I inaugurated last Friday, the Solemnity of the Sacred Heart of Jesus. May it be a privileged opportunity to highlight the value of the mission and of the holiness of priests at the service of the Church and of all humanity of the third millennium!

Like the Curé of Ars, Padre Pio also reminds us of the dignity and responsibility of the priestly ministry. Who was not impressed by the fervor with which he re-lived the Passion of Christ in every celebration of the Eucharist? From his love for the Eucharist there arose in him as the Curé of Ars a total willingness to welcome the faithful, especially sinners. Also, if St. John Mary Vianney, in a troubled and difficult time, tried in every way, to help his parishioners rediscover the meaning and the beauty of sacramental penance, for the holy friar of the Gargano, the care of souls and the conversion of sinners were a desire that consumed him until death. How many people have changed their lives thanks to his patient priestly ministry, so many long hours in the confessional!

Like the Curé of Ars, it is his ministry as a confessor that constitutes the greatest title of glory and the distinctive feature of this holy Capuchin. How could we not realize then the importance of participating in the celebration of the Eucharist devoutly and frequently receiving the sacrament of confession? In particular, the sacrament of penance must be even more valued, and priests should never resign themselves to seeing their confessional deserted or to merely recognizing the diffidence of the faithful for this extraordinary source of serenity and peace.

There is another great lesson that we can learn from the life of Padre Pio: the value and necessity of prayer. To whomever that would ask him about himself, he used to reply: "I am nothing but a poor friar who prays." And he really did pray always and everywhere with humility, confidence and perseverance. Here is a key point not only for the spirituality of the priest, but also that of every Christian… The human and spiritual life of Padre Pio teaches that only a soul intimately united to the Crucified will be able to transmit even to those who are far away the joy and richness of the Gospel.