St. Joseph, guardian of the Redeemer 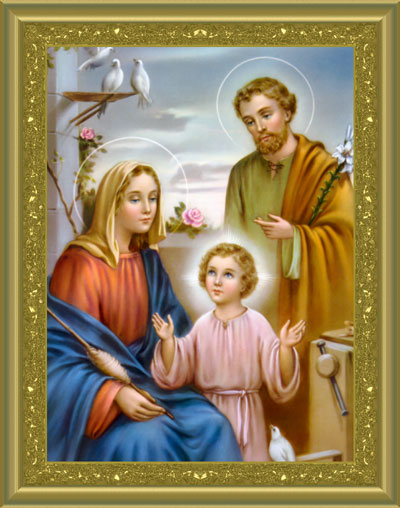 Several papal documents and homilies have been written on this great saint, "into whose custody God entrusted his most precious treasures (Jesus and Mary)." On the occasion of the centenary of Pope Leo XIII’s Encyclical Letter Quamquam Pluries on St. Joseph (August 15, 1889), Pope John Paul II wrote, on August 15, 1989, the Apostolic Exhortation Redemptoris Custos (The Guardian of the Redeemer) on the person and mission of St. Joseph in the life of Christ and of the Church. Here are large excerpts from this document:

"Joseph did as the angel of the Lord commanded him and took his wife" (cf. Mt 1 :24). Inspired by the Gospel, the Fathers of the Church from the earliest centuries stressed that just as St. Joseph took loving care of Mary and gladly dedicated himself to Jesus Christ’s upbringing, he likewise watches over and protects Christ’s Mystical Body, that is, the Church, of which the Virgin Mary is the exemplar and model.

Guardian of the mystery of God

If Elizabeth said of the Redeemer’s Mother, "blessed is she who believed," in a certain sense this blessedness can be referred to Joseph as well, since he responded positively to the word of God when it was communicated to him at the decisive moment. While it is true that Joseph did not respond to the angel’s "announcement" in the same way as Mary, he "did as the angel of the Lord commanded him and took his wife." What he did is the clearest "obedience of faith" (cf. Rom 1:5; 16:26; 2 Cor 10:5-6). One can say that what Joseph did united him in an altogether special way to the faith of Mary. He accepted as truth coming from God the very thing that she had already accepted at the Annunciation.

Pope John XXIII, who had a great devotion to St. Joseph, directed that Joseph’s name be inserted in the Roman Canon of the Mass – which is the perpetual memorial of redemption – after the name of Mary and before the apostles, popes and martyrs.

It was to assure fatherly protection for Jesus that God chose Joseph to be Mary’s spouse. It follows that Joseph’s fatherhood – a relationship that places him as close as possible to Christ, to whom every election and predestination is ordered (cf. Rom 8:28-29) – comes to pass through marriage to Mary, that is, through the family.

In recalling that "the beginnings of our redemption" were entrusted "to the faithful care of Joseph," the Liturgy specifies that "God placed him at the head of his family, as a faithful and prudent servant, so that with fatherly care he might watch over his only begotten Son." Leo XIII emphasized the sublime nature of this mission: "He among all stands out in his august dignity, since by divine disposition he was guardian, and according to human opinion, father of God’s Son. Whence it followed that the Word of God was subjected to Joseph, he obeyed him and rendered to him that honor and reverence that children owe to their father."

Since it is inconceivable that such a sublime task would not be matched by the necessary qualities to adequately fulfill it, we must recognize that Joseph showed Jesus "by a special gift from heaven, all the natural love, all the affectionate solicitude that a father’s heart can know."

When the magi departed, Herod "sent and killed all the male children in Bethlehem and in all that region who were two years old or under" (Mt 2:16). By killing them all, he wished to kill the new-born "king of the Jews" whom he had heard about. And so, Joseph, having been warned in a dream, "took the child and his mother by night, and departed to Egypt, and remained there until the death of Herod. This was to fulfill what the Lord had spoken by the prophet, ‘Out of Egypt have I called my son’ " (Mt 2:14-15; cf. Hos 11:1).

And so Jesus’ way back to Nazareth from Bethlehem passed through Egypt. Just as Israel had followed the path of the exodus "from the condition of slavery" in order to begin the Old Covenant, so Joseph, guardian and cooperator in the providential mystery of God, even in exile watched over the one who brings about the New Covenant.

It was from his marriage to Mary that Joseph derived his singular dignity and his rights in regard to Jesus. "It is certain that the dignity of the Mother of God is so exalted that nothing could be more sublime; yet because Mary was united to Joseph by the bond of marriage, there can be no doubt but that Joseph approached as no other person ever could that eminent dignity whereby the Mother of God towers above all creatures. Since marriage is the highest degree of association and friendship involving by its very nature a communion of goods, it follows that God, by giving Joseph to the Virgin, did not give him to her only as a companion for life, a witness of her virginity and protector of her honor: he also gave Joseph to Mary in order that he might share, through the marriage pact, in her own sublime greatness."( Leo XIII, Quamquam Pluries.)

This bond of charity was the core of the Holy Family’s life, first in the poverty of Bethlehem, then in their exile in Egypt, and later in the house of Nazareth. The Church deeply venerates this Family, and proposes it as the model of all families.

"St. Joseph is the model of those humble ones that Christianity raises up to great destinies;... he is the proof that in order to be a good and genuine follower of Christ, there is no need of great things – it is enough to have the common, simple and human virtues, but they need to be true and authentic."

Patron of the Church in our day

At a difficult time in the Church’s history, Pope Pius IX, wishing to place her under the powerful patronage of the holy patriarch Joseph, declared him "Patron of the Catholic Church." (Decree Quemadmodum Deus, December 8, 1870.) For Pius IX this was no idle gesture, since by virtue of the sublime dignity which God has granted to his most faithful servant Joseph, "the Church, after the Blessed Virgin, his spouse, has always held him in great honor and showered him with praise, having recourse to him amid tribulations."

What are the reasons for such great confidence? Leo XIII explained it in this way: "The reasons why St. Joseph must be considered the special patron of the Church, and the Church in turn draws exceeding hope from his care and patronage, chiefly arise from his having been the husband of Mary and the presumed father of Jesus..., Joseph was in his day the lawful and natural guardian, head and defender of the Holy Family.... It is thus fitting and most worthy of Joseph’s dignity that, in the same way that he once kept unceasing holy watch over the family of Nazareth, so now does he protect and defend with his heavenly patronage the Church of Christ."

This patronage must be invoked as ever necessary for the Church, not only as a defense against all dangers, but also, and indeed primarily, as an impetus for her renewed commitment to evangelization in the world and to re-evangelization in those lands and nations whereas I wrote in the Apostolic Exhortation Christideles Laici – "religion and the Christian life were formerly flourishing and... are now put to a hard test." In order to bring the first proclamation of Christ, or to bring it anew wherever it has been neglected or forgotten, the Church has need of special "power from on high" (cf. Lk 24:49; Acts 1:8): a gift of the Spirit of the Lord, a gift which is not unrelated to the intercession and example of his saints.

Besides trusting in Joseph’s sure protection, the Church also trusts in his noble example, which transcends all individual states of life and serves as a model for the entire Christian community, whatever the condition and duties of each of its members may be.

As the Constitution on Divine Revelation of the Second Vatican Council has said, the basic attitude of the entire Church must be that of "hearing the word of God with reverence," an absolute readiness to serve faithfully God’s salvific will revealed in Jesus. Already at the beginning of human redemption, after Mary, we find the model of obedience made incarnate in St. Joseph, the man known for having faithfully carried out God’s commands.

Pope Paul VI invited us to invoke Joseph’s patronage "as the Church has been wont to do in these recent times, for herself in the first place, with a spontaneous theological reflection on the marriage of divine and human action in the great economy of the Redemption, in which economy the first – the divine one – is wholly sufficient unto itself, while the second – the human action which is ours – though capable of nothing (cf. Jn 15:5), is never dispensed from a humble but conditional and ennobling collaboration. The Church also calls upon Joseph as her protector because of a profound and ever present desire to reinvigorate her ancient life with true evangelical virtues, such as shine forth in St. Joseph." (Discourse, March 19, 1969.)

One hundred years ago, Pope Leo XIII had already exhorted the Catholic world to pray for the protection of St. Joseph, Patron of the whole Church. The Encyclical Letter Quamquam Pluries appealed to Joseph’s "fatherly love... for the child Jesus" and commended to him, as "the provident guardian of the divine Family," "the beloved inheritance which Jesus Christ purchased by his blood." Since that time – as I recalled at the beginning of this Exhortation – the Church has implored the protection of St. Joseph on the basis of "that sacred bond of charity which united him to the Immaculate Virgin Mother of God," and the Church has commended to Joseph all of her cares, including those dangers which threaten the human family.

Even today we have many reasons to pray in a similar way: "Most beloved father, dispel the evil of falsehood and sin... graciously assist us from heaven in our struggle with the powers of darkness... and just as once you saved the Child Jesus from mortal danger, so now defend God’s holy Church from the snares of her enemies and from all adversity." (Prayer to St. Joseph, contained immediately after the text of the Encyclical Letter.) Today we still have good reason to commend everyone to St. Joseph.