Written by Yves Jacques on Saturday, 30 April 2016. Posted in Jubilee of Mercy 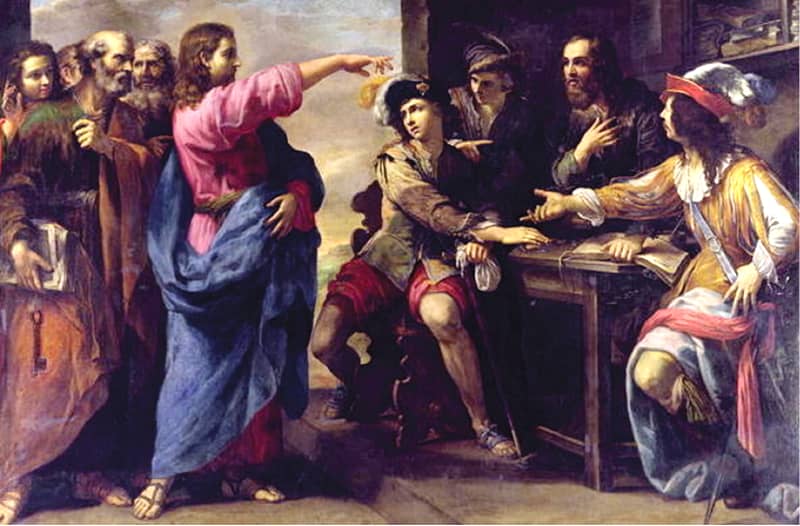 He went out and noticed a tax collector named Levi sitting in the tax booth, and He said to him, “Follow Me”. And leaving everything behind, he got up and followed Him... (Luke 5:27-28)

The publican, in the time of Jesus, was a “member or employee of the Roman financial companies who farmed the taxes. …The Roman State relieved itself of the trouble of collecting the taxes in the provinces by putting up the taxes of each in a lump sum to auction. The highest bidder received the authorization to extort the sum from the province in question. Such a system afforded ample opportunity for rapacious exactions on the part of the company and its officials, and the abuses were often intolerable. On account of these, and perhaps more because of the natural though impotent Jewish hatred of the Roman supremacy, those of the Jews who found it profitable thus to serve the foreign rulers were objects of execration to their countrymen. In the Gospel narrative we find them as a class habitually coupled with “sinners” and the ‘heathen’”. (Catholic Encyclopedia, Vol.12)

We read in the Holy Gospel that Jesus touched even these people with His words. Two great examples of this were Levi and Zacchaeus. Levi, though he was a tax collector, driven by greed, was converted by the Lord and became the great apostle and evangelist, Matthew. He displayed one of the most radical conversions presented to us in the New Testament, as his conversion was an immediate response to an invitation of Christ, “...He [Jesus] went out and saw a tax collector named Levi sitting at the customs post. He said to him, “Follow me.” And leaving everything behind, he got up and followed Him. Then Levi gave a great banquet for him in his house, and a large crowd of tax collectors and others were at table with them. The Pharisees and their scribes complained to his disciples, saying, ‘Why do you eat and drink with tax collectors and sinners?’” (LK 5:27-30).

The same can be said of Zacchaeus, that he also responded to an invitation of Christ, “…Zacchaeus, who was a chief tax collector and also a wealthy man was seeking to see who Jesus was; but he could not see him because of the crowd, for he was short in stature. So he ran ahead and climbed a sycamore tree in order to see Jesus, who was about to pass that way. When he reached the place, Jesus looked up and said to him, ‘Zacchaeus, come down quickly, for today I must stay at your house.’ And he came down quickly and received him with joy. When they all saw this, they began to grumble, saying, ‘He has gone to stay at the house of a sinner.’ But Zacchaeus stood there and said to the Lord, ‘Behold, half of my possessions, Lord, I shall give to the poor, and if I have extorted anything from anyone I shall repay it four times over.’ And Jesus said to him, ‘Today salvation has come to this house because this man too is a descendant of Abraham. For the Son of Man has come seek and to save what was lost’” (LK 19:2-10).

These public sinners readily embraced the Divine Mercy offered to them, and they were ready to make amends, as in the case of Matthew, he left everything behind in order to follow Christ.

But what of the moneychangers? Those who exchanged Greek, Roman and other currency for the “shekels”, the only currency allowed for purchasing animals for sacrifice in the temple. Louis Even tells us that, “the tithes or taxes of the Temple could only be paid in one certain coin, called the ‘half shekel of the sanctuary’, of which the moneychangers had managed to obtain the monopoly. There were several different coins at that time, but the people had to obtain this particular coin with which to pay their Temple Tax. Moreover, the doves and the animals that the people bought for sacrifice could only be bought with this same special coin that the moneychangers exchanged to the pilgrims, but only at a cost of twice (or even more) its actual worth, when used to buy these commodities necessary for the sin sacrifice.”

In his book, Money and Its True Function, F.R. Burch goes even further in commenting on this same text of the Gospel on Jesus’ Holy Anger: “As long as Christ confined His teachings to the realm of morality and righteousness, He was undisturbed; it was not till He assailed the established economic system and cast out the profiteers and overthrew the tables of the moneychangers, that He was doomed. The following day, He was questioned, betrayed on the second, tried on the third, and on the fourth, crucified.”

In a homily at Casa Santa Marta, (11/20/15), Pope Francis said, “Jesus did not chase the priests and scribes away from the Temple; he chased away those who were doing business there, the businessmen of the Temple. The chief priests and scribes were involved in their dealings: this is ‘holy bribery’! The Gospel is very clear. It says ‘The chief priests and scribes wanted to kill Jesus, along with the elders of the people….’ Why? Because ‘they did not know what they were doing, since everyone hung on his every word’. Jesus’ strength is to be found in his words, in his love. And where Jesus is, there is no room for worldliness. There is no room for corruption! This is a challenge for each and every one of us; this is the struggle the Church has to face every day. We must always heed Jesus’ words; we must never seek comfort from another master. Jesus told us that we cannot serve two masters. God or riches; God or power.”

We know that the moneychangers too, would have heard Jesus preaching in the temple. They would have also been aware of the many miracles that He performed, for, “all the people hung upon his words” (LK 19:48). But from our history books we learn that the moneychangers went right on stealing and deceiving the people. And what is worse, most of the people were unaware of their treachery until Jesus exposed them. We can therefore conclude, much like today, that not everyone was ready to answer the call of Christ, due to ignorance or apathy.

Still, there is one thing that we do know for sure: Jesus loved even these moneychangers. It is true that He exposed their evildoing. He chased them from the temple, even taking a whip to do so. But it was not because he did not love them. What Jesus wanted to do was to show them the gravity of their sin, but also that His Mercy is extended to everyone — even to the moneychangers! He proved this over and over in the accounts that we read in the Gospel. Even right up until His very last moment as He was dying on the Cross, He was heard crying out to His Father in Heaven, “Father, Forgive them for they know not what they do” (LK 23:34).

This is the Year of Mercy (December 8, 2015 - November 20, 2016), as promulgated by our Holy Father, Pope Francis. During this holy year we must pray for the conversion of those who control today’s money system; the modern day moneychangers. As we well remember, Pope St. John Paul II made Divine Mercy the cornerstone of his papacy. He was the promoter of the cause of Saint Faustina, the privileged soul who received the message of Divine Mercy from Our Lord Himself. And what coincided following the Extraordinary Jubilee year of 1983, marking the 1950th year since the death of Our Lord Jesus Christ? It was the collapse of the Soviet Union and it’s satellite states! Who would have thought that this collapse could ever have come about without a war? —No NATO tanks fired shells, no bombs fell on the Kremlin— Instead, it was the Masses, the rosaries, the Divine Mercy Chaplets, the prayers and sacrifices offered, the solemn consecration of the world to the Immaculate Heart of Mary by Pope Saint John Paul II,…, it was all of this which brought about such an extraordinary grace!

As we continue this new and Extraordinary Year of Mercy, let us not be afraid to get down on our knees. Let us beseech Heaven for the conversion of the International Bankers. Once touched by grace, they too could help create an honest money system for all, using their expertise and their talents. C. H. Douglas, founder of the Social Credit Movement once said, “At the psychological moment [perhaps when the entire economic system collapses] the bankers themselves will apply Social Credit”. Jesus told St. Faustina, “The prayer most pleasing to Me is prayer for the conversion of sinners. Know, My daughter, that this prayer is always heard and answered” (Diary 1397).

“Do not be conquered by evil, but conquer evil with good” (Rm 12:21). We are required then, as children of God, to pray for our lost brothers and sisters, knowing that God loves them. Jesus also said, through St. Faustina, “The greater the sinner, the greater the right to My mercy” (Diary, 723). God’s Mercy shows itself by bringing a greater good out of an evil. If we pray for the grace of the banker’s conversion, for the miracle of sanctification in their lives, as well as in our own, the Lord in His Mercy can then raise up great saints to glorify Him.

Pope John XXIII, reminded all men, and this includes the moneychangers, “You know well enough that your ransom was not paid in earthly currency, silver or gold; it was paid in the precious blood of Christ” (Apostolic Letter, Inde a Primus, 6/30/1960). It is Christ Who is our hope. If we participate in God’s plan for us in this Year of Mercy, we can help to usher in the promise of Our Lady’s message at Fatima: the Triumph of her Immaculate Heart. As Pilgrims of Saint Michael, in imitation of our founder, Louis Even, who recited the Rosary before beginning every meeting, our goal should also be to pray for the conversion of the “moneychangers”.

If Levi (St. Matthew) & Zacchaeus were both able, through the grace of God, to respond to the call of Christ and to change their ways —St. Matthew is now the patron saint of bankers— then the modern-day bankers, today’s “publicans”, can too. This can only help to bring about the “Good News” of the dignity of each and every human being who is created in the image and likeness of God.

Pope Francis in the concluding pages of Joy of the Gospel, tells us, “…Contemplating Mary, we realize that she who praised God for ‘bringing down the mighty from their thrones’ and ‘sending the rich away empty’ (Lk 1:52-53) is also the one who brings a homely warmth to our pursuit of justice.” It can be said that these beautiful words should summarize our entire mission as Pilgrims of St. Michael.

For anyone who would wish to rid the world of the corruption of the banking system, which enslaves man and leaves so many of God’s children in need of even the most important necessities in life, we would first need to change our own hearts. We must begin by consecrating ourselves, more and more, to the two loving Hearts of Jesus and Mary. We need to attend Holy Mass, even daily, if possible. We must do penance and pray the Rosary, as our Lady asked the three children at Fatima. And we must never forget that God wants to save all men, especially those in most need of His mercy. “For [Jesus] has come to seek and to save that which was lost.” (Lk 19:10).