Twenty five years ago, in 1984, Pope John Paul II became the first Pope to set foot on Canadian soil. It was also the longest pastoral visit ever made by any Pope in a single country — 12 days. When he arrived on September 9 in Quebec City, the Holy Father began a 15,000 kilometre marathon that took him from the Atlantic to the Pacific. When the visit ended on September 20, he had visited Quebec City, Trois-Rivieres, Montreal, St. John’s, Moncton, Halifax, Toronto, Midland, Winnipeg, St. Boniface, Edmonton, Yellowknife, Vancouver and Ottawa-Hull. Here are some excerpts from his prophetic speeches, which are more relevant than ever, since truth is eternal:

From the homily in Quebec City, September 9:

In every generation, living memory makes it possible for us to recognize the presence of Christ, asking as he did at Caesarea: "And you, who do you say I am?" The answer to this question is fundamental for the future of the Church in Canada and for the future of your culture. (...).

Your faith must remain active and strong; it must become always more personal, more and more rooted in prayer and in the experience of the Sacraments; it must reach the living God, in his Son Jesus Christ the Saviour, through the help of the Holy Spirit, in the Church. This is the faith that you ought to deepen with joy, in order to live it and to bear witness to it in daily life and in the new realms of culture. This is indeed the grace which we must request for the future of Quebec, for the future of all Canada.

From the homily at the Marian shrine of Cap-de-la-Madeleine, Sept. 10:

Let us pray that our generation may have lucid and mature faith, unfailing faith! May this faith be a sharing in the faith of Mary who stood at the foot of her son’s Cross on Calvary.

Was not Mary’s great trial to see her son rejected and condemned to death by the leaders of his people? She persevered to the end. She shared it all. She was united to Jesus who gave his life to save the world... And we, when we feel God is far away, when we do not understand his ways, when the cross hurts our shoulders and our heart, when we suffer for our faith, let us learn from our Mother about steadfastness of faith in every trial, let us learn how to find strength and courage in our unconditional commitment to Jesus Christ. (…) 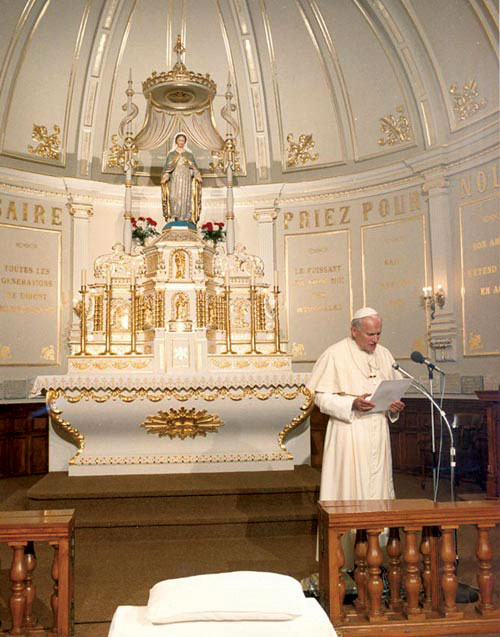 Speaking in the old chapel of the Shrine

The Church meditates on this paschal mystery (of the cross and resurrection) in prayer and, here, the prayer of the rosary takes on its importance. It is with Mary, to the rhythm of the angelic salutation, that we enter the whole mystery of her Son, who was made flesh, died and rose from the dead for us. In a shrine like Notre-Dame-du-Cap, but also in the life of each Christian, each family, this Marian prayer should be like daily breath.

A talk given to priests and seminarians at St. Joseph’s Oratory, Montreal, Sept. 11: 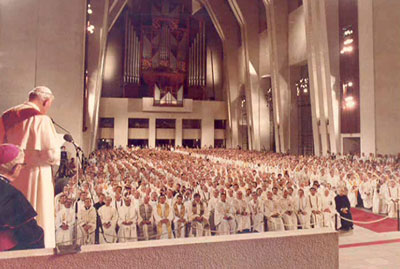 When we turn to essentials, no Christian, let alone a priest, can be content with silence, or with standing meekly aside on the grounds that ours is a pluralistic society, crossed and recrossed by various currents of thoughts of which many are inspired by scientism, materialism, even atheism. (...) In other words we must, more than ever, see to it that the voice of Christianity has a right to be heard in this country, that it might be freely accepted into the mentality of men and women, that its witness be expressed, at all levels, in convincing fashion, so that the developing culture may at the very least feel challenged by Christian values and take them into account. Christ became man, sacrificed his life and rose from the dead so that his light could shine in the eyes of the world, so that his leaven might cause the bread to rise; incorporated in the dough it must be constantly renewing it, on condition, however, that it retains its quality as leaven.

From the homily in Montreal, September 11:

Dear brothers and sisters of Quebec and Canada, what of your meeting with the living God? Sometimes today’s world seems to conceal him, seems to make you forget him. This apparent spiritual desert stands in sharp contrast with a period, not far removed in time, when the presence of God was highly visible here in social life and in the existence of many and varied religious institutions. And you hear repeated around you: "Where is your God?" (Ps 42,4). (…)

To replace God is an impossible task. Nothing can fill the emptiness of his absence, neither abundant material wealth — which does not satisfy the heart — nor easy and permissive lifestyles which do not quench our thirst for happiness – nor the exclusive search for success or power for their own sake — nor even technology which makes it possible to change the world but brings no real answer to the mystery of our destiny. All this may prove to be attractive for a time, but it leaves an aftertaste of illusion and a void in the heart (if we have moved away from the burning bush). (…)

Today in this great city of Montreal, we want to praise THE ONE WHO IS. We want to praise him along with all creation, we who exist only because he exists. We exist and we pass away, whereas he alone does not pass away. He alone is Existence itself.

God is above every creature; he is absolute transcendence. Where the evidence of creation ends, there begins the Word of God, the Word: "In the beginning he was with God ... Through him all things came to be, not one thing had its being but through him ..." (Jn 1, 1-3).

From the meeting with youth at the Olympic Stadium, Montreal, September 11:

In times of darkness, do not seek an escape. Have the courage to resist the dealers in deception who make capital of your hunger for happiness and who make you pay dearly for a moment of "artificial paradise" — a whiff of smoke, a bout of drinking or drugs. What claims to be a shortcut to happiness leads nowhere. It turns you away from that intelligent self-discipline which builds up the person. Have the courage not to take the easy path; have the courage to reverse directions if you have taken it. And know how to lend a helping hand to those of your companions who are haunted by despair when the darkness of the world is too cruel for them. (…) 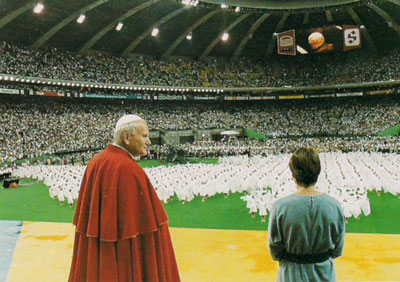 You are often critical, and rightly so, of a society so hungry for consumer goods that it destroys nature and lays waste its resources. But you ask yourselves what value you put on gain, on the possession of riches. Are you free in regard to money? How far are you prepared to share? Remember Jesus the day he went into Zaccheus’ house: his presence transformed an entire life-style; not only did Zaccheus rediscover justice in promising to repay the money he had acquired unjustly, but he also discovers generosity in sharing his wealth.

Broaden your vision beyond your usual milieu and your own country. Your brothers and sisters in vast regions of the world are without even the necessities of life, wounded in their dignity and oppressed in their freedom and their faith. Christ loves all his own and he identifies lovingly with the poorest. May he share with you his love for all his brothers and sisters! May he help you to live in that true solidarity which crosses frontiers and overcomes prejudices!

From the blessing of the fishing fleet, St. John’s, Newfoundland, Sept. 12:

Canada has been called the breadbasket of the world, and it was one of the world’s largest exporters of fish before the recent recession. It is a cruel paradox that many of you who could be engaged in the production of food are in financial distress here, while at the same time hunger, chronic malnutrition and the threat of starvation afflict millions of people elsewhere in the world.

"I appeal to those in positions of responsibility, and to all involved, to work together to find appropriate solutions to the problems at hand, including a restructuring of the economy, so that human needs be put before mere financial gain."

From the homily in Toronto, Sept. 15:

Technology has contributed so much to the well-being of humanity; it has done so much to uplift the human condition, to serve humanity, and to facilitate and perfect its work. And yet at times technology cannot decide the full measure of its own allegiance: whether it is for humanity or against it. The same technology that has the possibility to help the poor sometimes even contributes to poverty, limits the opportunities for work and removes the possibility of human creativity. In these and other instances technology ceases to be the ally of the human person.

For this reason my appeal goes to all concerned: to you, labour leaders; to you, business leaders; to you, scientists; to you, political leaders; to everyone who can make a contribution toward ensuring that the technology which has done so much to build Toronto and all Canada will truly serve man, woman and child throughout this land.

From the homily in Edmonton, Sept. 17:

We have listened today to the Gospel about the final judgment with the same emotion as always. This passage touches some of the most fundamental questions of our faith and morality. These two fields are strictly linked to each other. Perhaps no other passage in the Gospel speaks of their relationship in such a convincing way. (…)

"To one of the least of these my brethren". Thus: to man, to an individual human being in need.

Yet, the Second Vatican Council, following the whole of Tradition, warns us not to stop at an "individualistic" interpretation of Christian ethics, since Christian ethics also has its social dimension. The human person lives in a community, in society. And with the community he shares hunger and thirst and sickness and malnutrition and misery and all the deficiencies that result therefrom. In his or her own person the human being is meant to experience the needs of others.

Nevertheless, in the light of Christ’s words, this poor South will judge the rich North. And the poor people and poor nations — poor in different ways, not only lacking food, but also deprived of freedom and other human rights — will judge those people who take these goods away from them, amassing to themselves the imperialistic monopoly of economic and political supremacy at the expense of others. (…)

May justice and peace embrace (cf. Ps 84(85):10) once again at the end of the second millennium which prepares us for the coming of Christ, in glory. Amen.

To build peace we must establish justice. What moral conscience could resign itself, without reacting, when there exist "frightful disparities between excessively rich individuals and groups on the one hand, and on the other hand the majority made up of the poor or indeed of the destitute..."?

In a word, what does the Gospel of the Eight Beatitudes proclaim? It says that the poor in spirit, the gentle, the merciful, those who hunger and thirst for justice, the peacemakers — all these are invincible! It says that the final victory belongs to them! To them belongs the Kingdom of Truth, of Justice, of Love and of Peace!