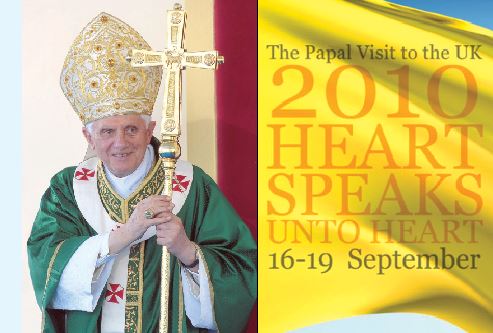 On Sept 16-19, 2010, Pope Benedict XVI visited the United Kingdom, and despite all the media had predicted, this visit was a tremendous success. The main purpose of this journey was to proclaim blessed Cardinal John Henry Newman (1801-1890), one of the greatest Englishmen in recent times, an outstanding theologian and man of the Church. In fact, the theme of the papal visit was inspired by the motto Blessed Newman chose on being created a Cardinal: “Heart speaks unto heart”. Pope Benedict indeed touched the hearts of millions. This visit was relevant not only for the United Kingdom, but for all Western countries that suffer from secularization, as the Holy Father came to support and strengthen the place of faith in God in society, point to the richness of our Christian traditions and the danger of minimising or marginalizing them. A few key quotes are reproduced on these two pages.

On the flight from Rome to the United Kingdom, Pope Benedict said: “A Church that sought above all to be attractive would already be on the wrong path.” And he immediately explained why: “Because the Church does not work for itself, it does not work to increase its own numbers, its own power. The Church is at the service of an Other. It serves to make accessible the proclamation of Jesus Christ, the great truths, the great powers of love and reconciliation that have appeared in him.”

In a speech addressed to the queen in Edinburgh, the Holy Father said: “As we reflect on the sobering lessons of the atheist extremism of the twentieth century, let us never forget how the exclusion of God, religion and virtue from public life leads ultimately to a truncated vision of man and of society and thus to a reductive vision of the person and his destiny.”

In London on Sept. 17, Pope Benedict XVI asked students candidly to become saints: “There is something I very much want to say to you. I hope that among those of you listening to me today there are some of the future saints of the twenty-first century. What God wants most of all for each one of you is that you should become holy. He loves you much more than you could ever begin to imagine, and he wants the very best for you. And by far the best thing for you is to grow in holiness. (...)

“Happiness is something we all want, but one of the great tragedies in this world is that so many people never find it, because they look for it in the wrong places. The key to it is very simple – true happiness is to be found in God. We need to have the courage to place our deepest hopes in God alone, not in money, in a career, in worldly success, or in our relationships with others, but in God. Only he can satisfy the deepest needs of our hearts.”

During in homily at the Mass in Glasgow on Sep. 16, the Pope urged Christians to be “examples of faith in public: “The evangelization of culture is all the more important in our times, when a ‘dictatorship of relativism’ threatens to obscure the unchanging truth about man’s nature, his destiny and his ultimate good. There are some who now seek to exclude religious belief from public discourse, to privatize it or even to paint it as a threat to equality and liberty. Yet religion is in fact a guarantee of authentic liberty and respect, leading us to look upon every person as a brother or sister. For this reason I appeal in particular to you, the lay faithful, in accordance with your baptismal calling and mission, not only to be examples of faith in public, but also to put the case for the promotion of faith’s wisdom and vision in the public forum.”

“The world has witnessed the vast resources that governments can draw upon to rescue financial institutions deemed ‘too big to fail’. Surely the integral human development of the world’s peoples is no less important: here is an enterprise, worthy of the world’s attention, that is truly ‘too big to fail’.” (Homily at the cathedral of London, Sept. 18.)

During the vigil of prayer in Hyde Park (see picture below), where over 80,000 young people knelt in silence in front of the Blessed Sacrament, the Holy Father said about John Henry Newman: “One of the Cardinal’s best-loved meditations includes the words, “God has created me to do him some definite service. He has committed some work to me which he has not committed to another” (Meditations on Christian Doctrine)...

“No one who looks realistically at our world today could think that Christians can afford to go on with business as usual, ignoring the profound crisis of faith which has overtaken our society, or simply trusting that the patrimony of values handed down by the Christian centuries will continue to inspire and shape the future of our society. We know that in times of crisis and upheaval God has raised up great saints and prophets for the renewal of the Church and Christian society; we trust in his providence and we pray for his continued guidance. But each of us, in accordance with his or her state of life, is called to work for the advancement of God’s Kingdom by imbuing temporal life with the values of the Gospel. Each of us has a mission, each of us is called to change the world, to work for a culture of life, a culture forged by love and respect for the dignity of each human person.”

In an address to politicians, businessmen, men of culture and religious leaders, at Westminster Hall, on Sept. 17:

“Religion is not a problem for legislators to solve, but a vital contributor to the national conversation. In this light, I cannot but voice my concern at the increasing marginalization of religion, particularly of Christianity, that is taking place in some quarters, even in nations which place a great emphasis on tolerance.”