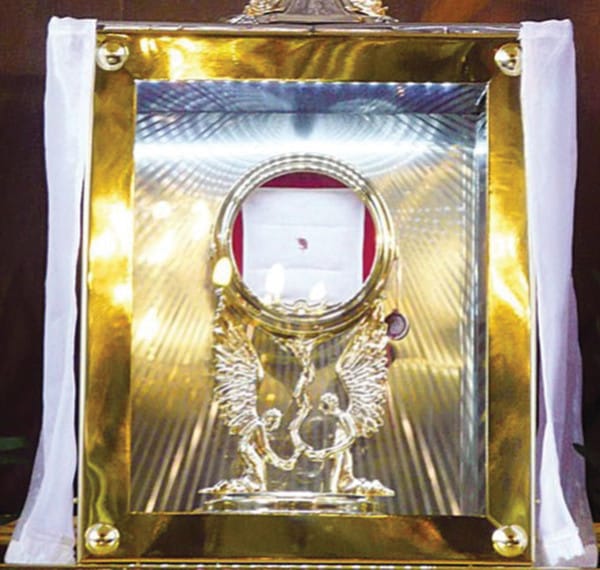 In October of 2008, an extraordinary event took place at St. Anthony of Padua parish church in Sokółka, Poland. A consecrated Host was transformed into a fragment of muscle tissue belonging to a living human heart suffering severe stress and on the point of death.

Transformation of a Host

At 8:30, on Sunday morning October 12, 2008, Fr. Filip Zdrodowski was celebrating Holy Mass at St. Anthony of Padus Church, in Sokółka, Poland. While Fr. Jacek Ingielewicz was assisting him in distributing Holy Communion, one of the hosts fell by accident on the altar step. A woman parishioner kneeling nearby noticed it and pointed it out to Fr. Jacek, who promptly picked it up. Observing that the Host was soiled, he placed it in the vasculum, a small bowl of water sitting beside the tabernacle [the vasculum is the little basin the priest washes his fingers in after distributing Holy Communion].

After the Mass, the sacristan, Sister Julia Dubowska, took the vasculum into the sacristy, emptied its contents into another vessel, and locked it away in the safe. Only she and the pastor, Msgr. Stanisław Gniedziejko, had a key to the safe. It is worth noting that Sr. Julia is a member of the Congregation of the Sisters Servants of Jesus in the Eucharist whose special charism is to promote veneration of Jesus present in the Blessed Sacrament.

Having never before dealt with such a situation, Sr. Julia examined the vessel every day to see if the consecrated Host had dissolved. Normally the host dissolves completely in the water after several days. She expected the same to occur in this case. On October 19, around eight o’clock in the morning, upon opening the sacristy safe, Sr. Julia recognized the smell of bread. She assumed that the Host had dissolved completely and that she could now empty the contents of the vasculum into the sacrarium, a special drain located near the altar.

When she looked at the Host in the vessel she was struck dumb with amazement. In the center of the white Host she saw what looked like a bloody piece of living flesh measuring about a centimeter by a centimeter and a half. Sr. Julia stared at the extraordinary object with the greatest astonishment and reverence. She confessed that she felt like Moses gazing on the bush in the wilderness that burned without being consumed.

Seeing the nun standing motionless so long over the transformed Host, Fr. Filip Zdrodowski asked her what was the matter. Sr. Julia explained to him what she had in her hand and how the consecrated Host came to be there. She placed the vessel on the desk so that the Monsignor and the other priests present in the sacristy might see the transformed Host.

Monsignor Stanisław Gniedziejko would later recall his shock at seeing the blood-red substance on the white Host. The water in which it was immersed remained untinged by the blood. On taking a closer look at the bloody substance on the Host, he saw something resembling a piece of flesh—a bloody fragment of living tissue.

Everyone knew this was a consecrated Host in which the Risen Christ was present in His glorified human nature. They began to wonder if this red substance on the Host were the result of a natural process, or if it might not be a supernatural sign through which Christ wished to make something very important known. The Monsignor immediately cautioned those present against trivializing the mysterious phenomenon. That same day he informed His Excellency Archbishop Edward Ozorowski of the incident. Shortly afterwards, the Archbishop paid a visit to Sokółka. On examining the Host, he gave orders that it should be kept safe and observed closely.

The vessel containing the Sacred Host was transferred to the tabernacle of the Divine Mercy Chapel in the parish rectory on October 29th, 2008. The following day, the Archbishop had the Host removed from the water, placed on a white corporal enclosed in a pyx, and returned to the tabernacle. In a short while the Host dried out. The reddish brown bloody substance encrusted itself onto the corporal cloth, and thus it remains to this day. For three years the Host was kept in the rectory, and it was not until October 2, 2011, that It was solemnly brought back to the church and displayed for daily adoration in the chapel of Our Lady of the Rosary.

The expertise of two outstanding scientists

On August 5, 2009, on the Archbishop’s instructions, the Metropolitan Curia of Białystok sent a letter to Profs. Maria Sobaniec-Łotowska and Stanisław Sulkowski of the Białystok Medical University requesting their scientific expertise on “the material adhering to the Host as preserved at St. Anthony of Padua parish church in Sokółka.” The letter stressed the need for treating the matter “with all due seriousness, urgency, and in the strictest confidence.” Profs. Maria Sobaniec-Łotowska and Stanisław Sulkowski are both outstanding scientists, highly respected in Poland and abroad. For thirty years they have specialized in the field of histopathological diagnostics and have many academic achievements to their credit. They work in two separate branches of the Białystok Medical University: the Institute of Medical Pathomorphology and the Institute of General Pathomorphology.

On August 7, 2009, Prof. Maria Sobaniec-Łotowska traveled to Sokółka where, in the presence of a special commission, she took a sample of the mysterious substance on the Host. “When I took the sample,” she states, “I had no idea what this substance was. I obtained a small amount of it. It was brown in color and adhered closely to the preserved fragment of the Blessed Host.“

The two professors conducted separate, rigorously scientific analyses of the sample of the Host. Using state-of-the-art light and electron microscopes, they photographed and made detailed descriptions of the morphological images.

The results of the separate, independent analyses were in complete agreement with each other, greatly astonishing the two scientists. It turned out that the mysterious substance into which the fragment of the Host had changed was muscle tissue of a human heart experiencing the agony of death—as if on the point of cardiac arrest.

Professor Maria Sobaniec-Łotowska explains: “In the tiny fragment of material, which we examined, we found the presence of several morphologically distinctive markers indicating myocardial tissue. One of these markers is the phenomenon of segmentation, i.e. damage to heart muscle fibers at the zone of insertion, and the phenomenon of fragmentation. These lesions appear as multiple small cracks, as if cut with a knife. Such changes occur only in necrotic fibers and reflect the rapid contractions of the heart muscle in the final stages of death.

Another important proof that the test material comes from the muscle of a human heart is the mainly centralized configuration of the nuclei in the observed fibers, which is characteristic of that muscle. Along the length of some of the fibers we also found patterns consistent with node contractions. Closer electron-microscopic examination revealed outlines of the insertion points and delicate micro-fibrillar networks. Summarizing our findings in the report to the Archdiocesan Curia, we stated: ‘The material (...) indicates myocardial tissue, or at least, of all the tissues of a living body, it most resembles it.‘ And what is important, in our opinion, is the fact that the material we analyzed consists entirely of this tissue.“

Professor Stanisław Sulkowski emphasizes, “The matter comprising the Host quickly dissolves when immersed in water. But the Blessed Host from Sokółka has not broken down for reasons that remain baffling to science. What is still more remarkable is the fact that the middle portion of the Host turned into heart muscle tissue, forming an inseparable structure with the rest of the white Host.“

The photomicrographs are empirical, scientific proof that no one could have united the two structures — heart muscle tissue and bread. Even scientists equipped with the most up-to-date equipment could not produce anything like it, so closely is the matter of the Host united and interpenetrated with the heart muscle fibers. This excludes any possibility of human interference.

Professor Maria Sobaniec-Łotowska stresses, “This extraordinary and mysterious interpenetration of the white Host material with human heart muscle fibers was observed, examined, and photographed using both light and electron microscopy. The indication is that there could not have been any human intervention. Yet another extraordinary fact bears mentioning. The Host remained immersed in water for a considerable length of time, after which it was placed on the corporal. Yet our studies indicated none of the changes one would have expected of heart muscle fibers being immersed in water for so long a period. From the point of view of empirical research, we are unable to explain this fact. These are undoubtedly the most important studies I have conducted in my life. The results were shocking to me. They point to an extraordinary phenomenon, which from a scientific standpoint, is simply inexplicable.“

The transformation of the consecrated Host into the muscle of a human heart in its death agony is a sign calling us all to repentance. It is a reminder to all of us that every Holy Mass is a re-presentation (making “present”) of the passion, death and resurrection of Christ and that Christ is truly present in the consecrated Host in His glorified, resurrected humanity, in order that He may offer Himself to us as our “antidote to death.”