Our Lady of the Rosary of Chiquinquirá, Colombia 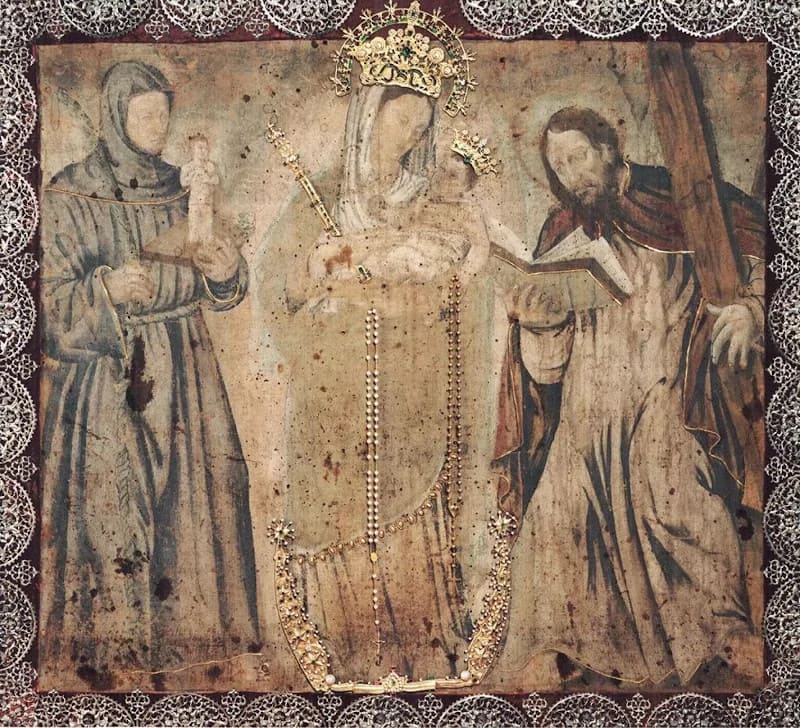 The miraculous image of Our Lady of the Rosary at the Basilica of Chiquinquirá, Colombia 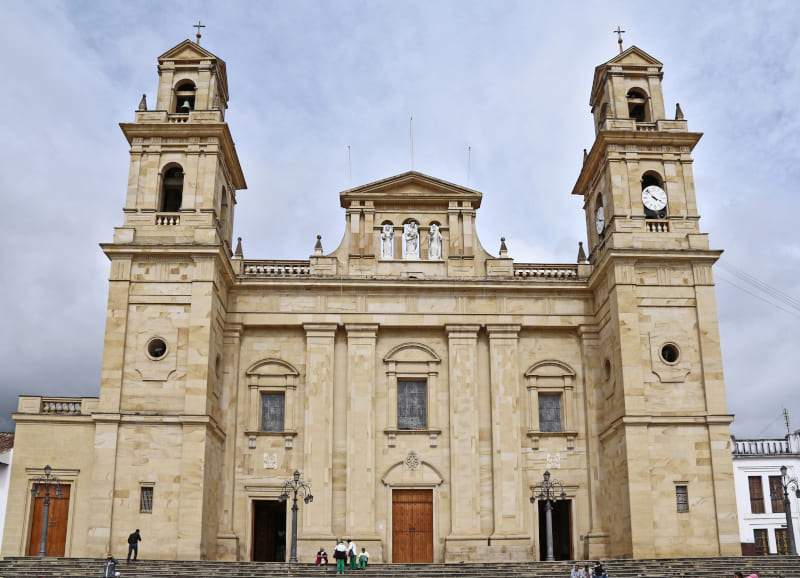 Basilica of Our Lady of the Rosary in Chiquinquirá, Colombia

Our Lady of Chiquinquirá is the Queen and Patroness of Colombia. The shrine to Our Lady of Chiquinquirá, which means "land of fog and swamps", is located in the Department of Boyacá, in the Andes, more than 2,000 meters above sea level. The history of the shrine is connected to a painting of the Virgin Mary and dates back to 1560.

The painting had been commissioned with the purpose of encouraging the faith of the Koka Native Americans and the colonists of Colombia. The artist, Alonso Narváez, used for his canvas a rough 44" X 49" piece of material that had been weaved by the local Native people. He painted the image using pigments taken from the areas soil, mixed with herbs and flowers from that region of Colombia.

The image of Our Lady of Chiquinquirá represents the Virgin wearing a white veil, a rose colored robe, and a sky blue cape, while holding a scepter in her right hand. In her left arm she cradles the Christ Child whom she looks upon with a loving tenderness, and from her finger dangles a large Rosary. The Christ Child caresses a small bird in His hand which is attached by its foot to a string and tied to Jesus' tiny thumb. In His left hand he also holds a large Rosary. On one side of the Virgin stands the Apostle St. Andrew, and on the other side St. Anthony of Padua. These were the two personal patrons of the men who had commissioned the painting of the image; Fray Andrés Jadraque of the Spanish Dominicans, and Colonist Don Antonio de Santana.

In 1563 the image of Our Lady of Chiquinquirá, or, as she is referred to by the local people, Our Lady the Rosary, was placed in a small chapel to allow for public veneration, but by 1577 the humidity in the chapel, along with a leaking roof, had already caused the painting to be almost completely destroyed. In 1585 it was decided that the painting should be removed from that chapel and taken to the town of Chiquinquirá, where it was placed in a store room until it could be repaired, but instead, it ended up being completely neglected, and later even being used for drying out corn in the hot sun.

Providentially, a pious woman from Seville, Maria Ramos, while cleaning the adjacent chapel, found the damaged image in the storeroom. She cleaned it up and hung it in the chapel and would often come to pray before the image.

One Friday, December 26, 1585, Maria had come in to do her usual cleaning. When she came into the chapel she saw that the faded, damaged image of the Virgin had suddenly been miraculously restored. The canvas was cleaner and it's colors were now brighter. The image itself was clear and seemingly brand new. Small holes and tears in the canvas had somehow self-sealed, and this "healing" of the image continued. People began calling it the miracle of the recovered image.

The painting hung, in its new state unprotected for more than 300 years. Despite the many pilgrims who came to touch the frail cotton cloth with their hands or with religious objects it was never damaged. In more recent years the image was placed behind a thick plate of glass for protection. Our Lady of Chiquinquirá was named Patroness of Colombia by Pope Pius VII in 1829.

Our Lady of Chiquinquirá Maracaibo, Venezuela 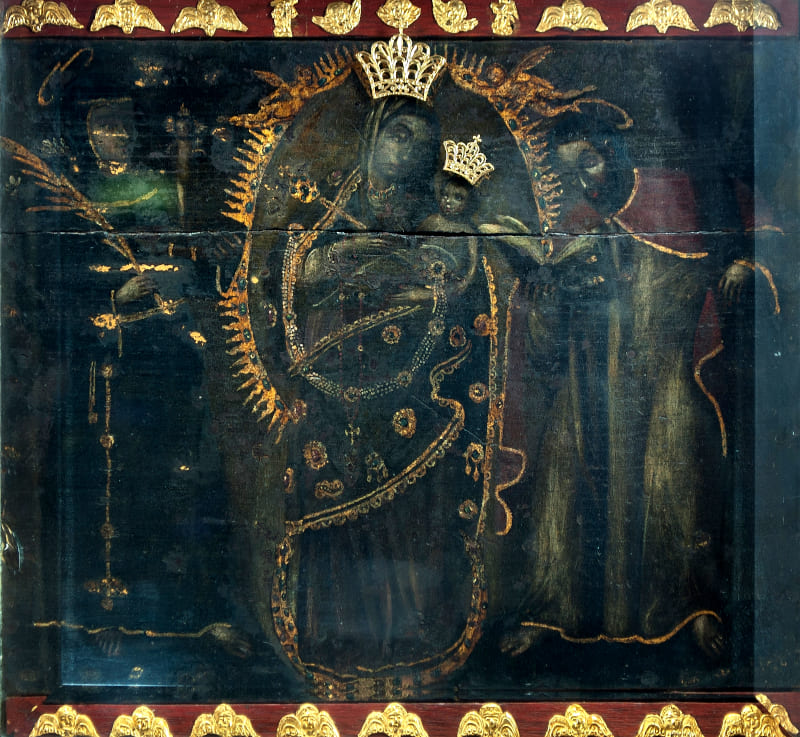 The Virgin of of Chiquinquirá in Maracaibo, Venezuela 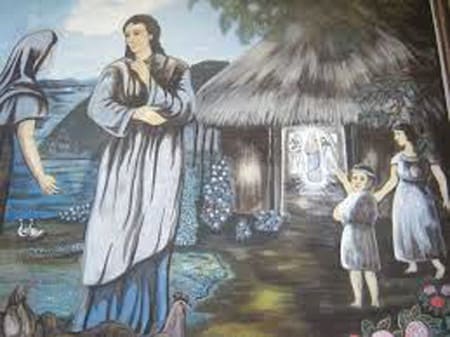 Suddenly, from the house, she perceived a glowing light. 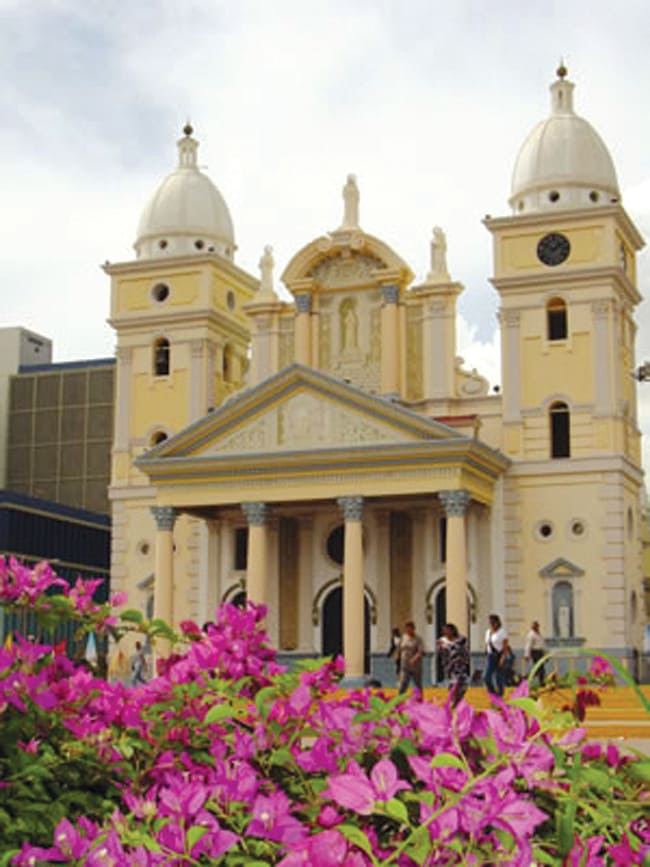 There is another miracle of Our Lady of Chiquinquirá which took place in a different part of South America, Maracaibo, Venezuela. In 1709, almost 150 years after the painting of Our Lady of the Rosary in Chiquinquirá, Colombia, an elderly woman, Maria Cardenas, who made her living washing clothes for the wealthy families of her town, was thus engaged down by the shore of a lake near her home. A small flat piece of wood floated near her as she worked, and deciding that she might be able to make use of it, she salvaged the board from the water and carried it home with her. On arriving home, Maria propped the board up on the table in her kitchen, then went outside to hang the wet clothes to dry in the sun. Suddenly, from the house, she perceived a glowing light. Returning to her kitchen she realized that the light was glowing out from the board, and upon closer inspection she was able to make out an image of what looked like the Blessed Mother holding the Christ Child, with St. Andrew and St. Anthony of Padua on either side; the very same image as that of Our Lady of the Rosary of Chiquinquirá! Maria ran from her home to call in all her neighbors that they might see the miracle, and together they began to pray the Rosary.

Our Lady of the Rosary

It is interesting to note that the original image of Our Lady of Chiquinquirá, which as we have already stated, was painted in 1560, and was called by the people, Our Lady of the Rosary. But it was not until 1573, after the Battle of Lepanto, that Pope Pius V instituted a new feast day of Our Lady of the Rosary. It was after the defeat of the great Ottoman Empire, who for a long time had threatened to overrun all of Europe, and wipe out Christianity, but were prevented by a small fleet of the Holy League, a coalition of the Southern European Catholic maritime states. The Holy League credited their victory to the Blessed Virgin Mary, having implored her help and intercession through the praying of the Rosary. Therefore Pope Pius V declared the Virgin as Our Lady of Victory, commemorating the battle of Lepanto, which to this day is celebrated in the Catholic Church on October 7th, as the Feast of Our Lady of the Rosary. 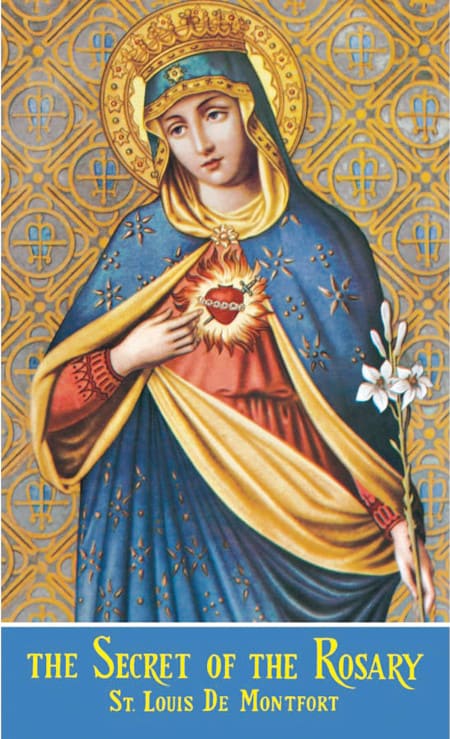 St. Louis de Monfort in his book, The Secret of the Rosary, warns against, "ignorant scholars who regard the Rosary as something of little importance...", himself identifying the Rosary as, "a priceless treasure...inspired by God." Pope St. John Paul II reaffirmed this in his Apostolic Letter, Rosarium Virginis Mariae, when he said that, "the rosary is distinguished by its specifically Christian characteristics... Against the background of the words Hail Mary the principal events of the life of Jesus Christ pass before the eyes of the soul. They take shape in the complete series of the joyful, sorrowful [luminous] and glorious mysteries, and they put us in living communion with Jesus through—we might say—the heart of his Mother. At the same time our heart can embrace in the decades of the rosary all the events that make up the lives of individuals, families, nations, the Church, and all mankind; our personal concerns and those of our neighbor, especially those who are closest to us. Thus the simple prayer of the rosary marks the rhythm of human life...the rosary is my favorite prayer..."

Perhaps the message in the silent image of Our Lady of the Rosary of Chiquinquirá is just that, "Pray the Rosary". Our Blessed Mother has appeared several times throughout the world: at Fatima, Lourdes, Gietrzwald, Ile Bouchard, LaSalette,…, and she has repeatedly asked for the continued recitation of the holy Rosary, most especially within the family. Fr. Patrick Peyton, great promoter of the family Rosary, made the promise that, "the family that would pray together, would stay together [united].” What could we possibly desire more than that today?

The people of Colombia and Venezuela, when they speak of Our Lady of the Rosary of Chiquinquirá, they say that, “She is the way that leads to Jesus.” Let us ask her today to help us to claim Our Lady of the Rosary as our own, that she may continue to perform her miracles through the recitation of the Rosary with our families in our homes, and throughout the entire world.

Our Lady of the Rosary of Chiquinquirá - Pray for us! 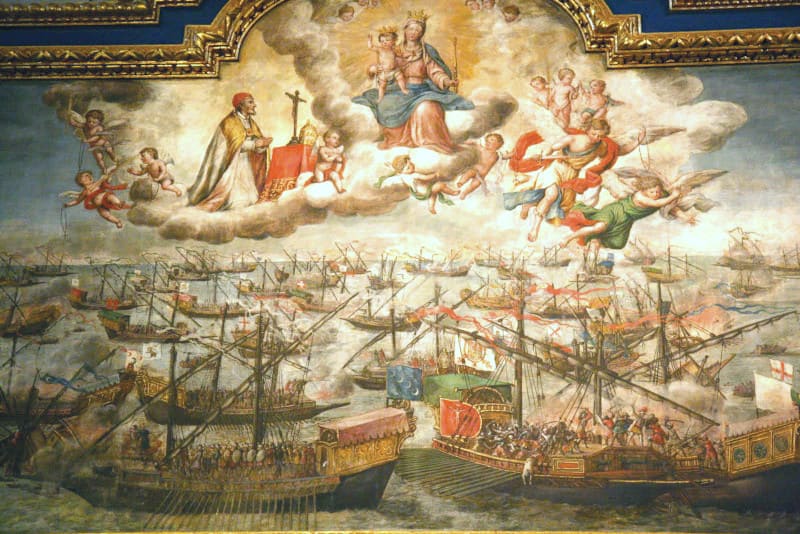